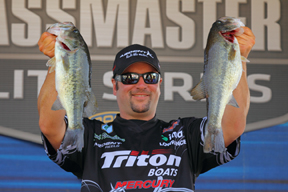 Roumbanis, a 33-year-old pro from Bixby, Okla., has become one of the most popular anglers on the Bassmaster Elite Series since its inception in 2006. That's not to say that Roumbanis is all show and no go, Roumbanis has compiled a set of career statistics that would make any pro with 86 Bassmaster tournament entries jealous.

In his career to date, Roumbanis has earned $846,776 and qualified for the Bassmaster Classic twice. He has posted paychecks in nearly 60-percent of the tournaments he has entered; 12 times finishing in the top 10. His career B.A.S.S highlights include two wins; the 2007 Bassmaster Memorial Major on North Carolina's High Rock Lake, and the 2008 Elite Series Carolina Clash on South Carolina's Lake Murray.

He has also compiled impressive statistics in FLW Outdoors competition. He claimed his first major victory in an Everstart Series event on the Mississippi River in LaCrosse, Wis. in 2005; he has finished in the top 10 four times and has earned $136,027 in addition to his B.A.S.S. earnings

Roumbanis is excited about joining forces with Picasso Lures because of the company's reputation for innovation. "Picasso is a company that has always worked to be ahead of the pack when it comes to product development," Roumbanis said. "They are a cutting edge company, and I'm excited to be working with them."

Terry Monteleone; President of Picasso Lures expressed his respect for Roumbanis. "We feel very fortunate to have Fred join the Picasso pro staff. He gives us that added one-two punch which few other anglers posses," Monteleone said. "Not only is he an extremely talented and knowledgeable angler, but he also has the creativity to improve upon the performance of existing lures as well as innovative design concepts for future projects.

"I have had the opportunity to work with him previously in a development role, and I look forward to working with him once again at Picasso Lures."

Founded in 1993 as a garage company, Picasso Lures has built a reputation for bringing extreme attention to detail in all of the offerings they bring to market. Since moving from a hobby to a full-fledged business in 1996, Picasso has retained their ability to respond quickly to industry trends and customer needs. With proprietary manufacturing and innovative coating processes that enhance feel and performance, Picasso Lures is committed to providing tournament professionals and hardcore anglers with the best tools for producing results.