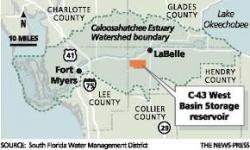 LaBelle, FL - Bulldozers have been piling up massive mountains of earth and construction crews have been working since last year to build a restoration project crucial to the health of the Caloosahatchee River and Estuary. The C-43 West Basin Reservoir remains on schedule with a steady stream of funding championed by Gov. Rick Scott and Florida House representatives Matt Caldwell, Heather Fitzenhagen, Dane Eagle, Ray Rodrigues, Byron Donalds, Bob Rommel and senators Lizbeth Benacquisto, Kathleen Passidomo and Denise Grimsley.

"I want to thank Gov. Scott and the Southwest Florida delegation members for showing their commitment to our residents by appropriating $106 million to accelerate the construction of the C-43 Reservoir," said South Florida Water Management District (SFWMD) Governing Board member Rick Barber. "This money will expedite the completion of this crucial reservoir project that will capture basin runoff and reduce Lake Okeechobee discharges."

About the C-43 Reservoir:
Work on the C-43 West Basin Reservoir began in 2016 on 10,700 acres SFWMD owns near LaBelle in Hendry County. Once completed, the reservoir will hold 170,000 acre-feet of water, allowing for the capture of basin runoff and aid in reducing damaging discharges from Lake Okeechobee to the Caloosahatchee Estuary. It will also store fresh water that can be sent to the estuary during dry periods to help reduce elevated salinity levels that can damage oysters, seagrasses and other wildlife.

"We will look back at the 2017 legislative session as the most significant funding victory for the C-43 West Basin Reservoir project," added SFWMD Governing Board member Jaime Weisinger. "With continued commitment from state leadership, this monumental construction undertaking will be a reality for Southwest Florida."

Additional design and construction contracts will be awarded as construction progress moves forward. The next major contract is expected to be awarded by the Governing Board in January 2018. This contract will involve building a main pump station that will draw water from the Caloosahatchee River into the reservoir.

The approximately $500 million project is expected to be completed in 2022.