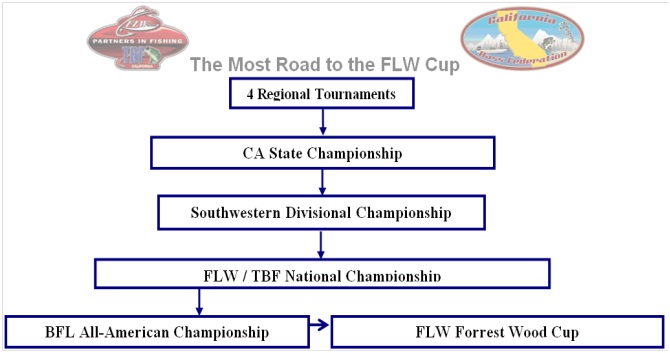 Q2: “Do I need to use vacation days to compete during the week? No. California Bass Federation holds an official practice day on Saturday and each regular season tournament is held on Sunday so you are back to work on Monday!

Q4: “Is the cost of competing in California Bass Federation tournaments very high”? The cost of competing in a California Bass Federation tournament is comparatively low. The entry fee is only $70.00 per event. If you wish to increase your potential for higher earnings you can participate in the optional big fish prize or enter the top five or top three options.  In these cases you simply add an additional $10.00 for each option. When your compare Federation entry fees to other circuits – it’s comparatively low.

Q6: “I’ve seen tournament fishing on television. Do all bass circuits in California provide a direct road leading to national circuits? No. As a matter of fact – most do not.  See the chart below:

Q7: “When does the Federation tournament season begin”? The first tournament of the season will be held by the Northern California Region #3 on November 16th. The tournament will be held on Lake Shasta. If you wish to participate in this event contact Mac McCullough at: macmccullough@att.net. The entry deadline for this tournament is November 10th 2014.

Q8: “What do I need to do to get started in the California TBF”?  You should visit our web site at: www.californiabass.org for regional information, tournament dates & times, entry forms, rules and contact information. For information today, you can also contact Mac McCullough at: macmccullough@att.net

So, The California Bass Federation is accessible, affordable, educational, very competitive and provides a road to national visibility. What are you waiting for?

Mac is the Region #3 Tournament Director for CBF