Glowing Lures -- Then
Seems like good things come in cycles, doesn’t? I remember listening to my dad talk about using glow in the dark fishing lures back in the 1950’s. He loved them and said that they worked great but you had to charge them up every five minutes to keep them glowing. Back then glowing lures and products were created from zinc-based additives. These zinc glow products suffered from several problems when used in luminous fishing lures. While they would charge quickly they would also quickly lose their glow. You made the zinc products glow by exposing them to ultraviolet light (UV light) but the UV rays tended to wear out the zinc glow such that it would glow less and less over time. And, for the longest time yellow-green was the only glow color you could get in a glow in the dark product. 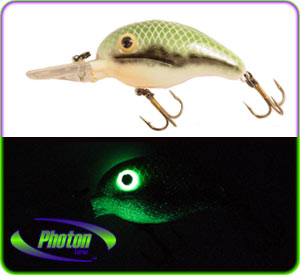 Glowing Lures -- Now
My how things have changed. Today’s high-tech glow additives allow fishing lure manufacturers to create luminous or glowing lures with a full spectrum of glow colors, and the glows are much brighter and last longer than the glow lures of the past. Today’s glow material, like those in the past, is still energized or charged after being exposed to UV light. Today’s glow material doesn’t wear out after exposure to UV rays and can glow just as bright as new years later. Any source of UV light will do to charge your lures -- sunlight, a black light, or a fluorescent light. After an initial charging of 2-5 minutes your glow lure will glow for up to 8 hours in total darkness. When fishing in sunlight, you don’t have to do anything special to keep your lure charged. Every time you retrieve your lure to make a cast you will charge your lure for 5-10 seconds -- plenty of time to keep it glowing all day long. Plus, your lure can get UV rays even when it is several feet under water -- more on that later.

Why Are Glowing Lures So Good At Catching Fish?
So why should you be fishing glowing lures? Well, for one thing anybody who has fished them has learned that they just plain catch fish. That’s usually a good enough reason for most of us but curious minds want to know why are glowing lures so good at catching lots of fish in so many different situations? To understand the catching power of today’s glowing lures we need a little more technical information about how light travels through water, fish vision, and what it takes to make the total glowing lure solution.

Light and Water
The first part of the glowing lure secret is light. Light travels through water very differently than it does through the air. For one thing, different colors of light travel farther through water better than others do. Reds and oranges travel the least distance in water before turning to shades of grey with greens next, and finally blues traveling the greatest distance. So, your lure that looks bright red in the boat will appear some shade of grey when it is being fished in 10-15 feet of water. Also if we remember our high school science class, we will recall that much of the light that hits the water’s surface is reflected back into the sky. Yes, at twelve noon with the sun directly overhead, in the summer, sun light does a pretty good job of going down several feet in the water. Move the sun backwards or forwards in the sky an hour or two and much less of the sunlight hitting the water’s surface penetrates the water’s surface. 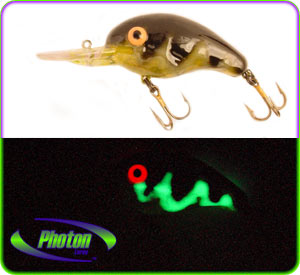 Walleye Chop
Anybody who has done much walleye fishing knows how walleyes will move into shallower water and begin actively feeding when there is some wind on the surface of the water. That wind takes that smooth surface of the water and turns it into a very irregular chop pattern that greatly reduces the amount of light entering the water. Walleyes have superior light gathering capabilities in their eyes and these reduced light levels give them a big advantage over prey fish in these situations.

Suntan Underwater?
Here’s an interesting little fact about glowing lures. We’ve said that different colors of light travel better in water than others. Well, ultraviolet light travels in water about as well as green light does. If the sun is shining or even on a partially cloudy day, the UV rays that are hitting your arm and giving you a suntan will also travel through the water and make your lure glow under water. So even though you can’t see the glow in the boat because of the bright sunlight, at 8 feet in the water, the UV rays will be causing your lure to instantly glow and add flash and contrast to your lure to help it standout and attract predators.

So, Why Are Glowing Fishing Lures So Effective?
Walleye fishermen have known for several years about the power of glowing lures. The secrets out and bass fisherman are beginning to learn of the benefits of adding glow effects to lures. Even crystal clear water can get pretty dark pretty quick. When you are fishing in the 6-15 foot range, the water has already turned shadowy. High-quality glowing lures only need a slight shadow, not total darkness, to make their glow patterns visible to the light seeking eyes of that big predator hiding near cover. Bass, walleye, pike, salmon, trout, steelhead, and many other species of fish have vision optimized for color selection. Color does make a difference. The problem is most lures, without glow, look the same color -- grey -- when you get down several feed in the water. Today’s glowing lures bring a variety of colors down to the depths where the fish are actively feeding. These colors include an ever-increasing palette of violets, blues, greens, yellows, oranges, and reds. Today’s glow lures allow you to add flash, contrast, and increased color to 8-25 feet, and deeper, fishing. These glow colors greatly increase the contrast between the lure and its surroundings and allows for easy locating, tracking, and attacking by predator fish always looking for that bait fish that stands out from the crowd and looks like easy pickings.

Glow - One Part of Catching
Don’t make no green glowing glob and call it a glowing lure. A luminous lure should always start with a great color pattern and then add glow effects to make it a killer pattern. Even if it didn’t glow a glowing lure should catch fish just because the starting color pattern is a known fish attractor. Glow turns a good lure into a catching machine. 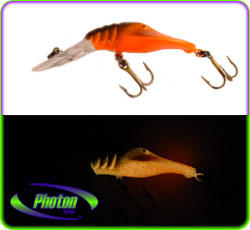 The glow lures that best help you turn fishing into catching use glow patterns to enhance and add contrast to proven, classic fish catching color patterns. How do glows enhance color patterns? Take a craw pattern for example. A good use of glow would be to enhance the large dark scales on the lure’s side to make the lure stand out against the background. Another good use of glow is to allow glow to come through the fish scales of a shad pattern, or make the peach chest of a bass pattern standout, or make wounded fish’s eyes truly standout.

Glowing Eyes
Predator fish are known to key in on the eyes of prey fish. An outstanding use of glow in a lure is oversized glowing eyes. The predator first locates the eyes so that she will know which way the prey is swimming and then she pounces. Quality glowing eyes are proven to enhance a lure’s fish catching ability.

Reid Wender and Photon Lures
Reid Wender, President of Photon Lures, www.photonlures.com, is an expert in image processing and vision applications and he has spent the last several years applying that know-how to creating fishing lures optimized for a fish to see and attack. Photon Lures, a world-leader in luminous fishing equipment, has gone through the research and development to create the ideal glowing lure. We are developing an ever-expanding selection of crankbaits, deep diving cranks, ultra-light lures, and soft plastics -- They All Glow! As we’ve already told you, we start with proven color patterns and add high-quality glow effects and glow patterns but we don’t stop there. In addition to our great colors and glows, we have hard plastic body styles with wide wobbles that create the turbulence and vibration of wounded baitfish along with internal rattles to completely stimulate the lateral line of Mr. Lunker. Add to these features huge, oversized, bulging 3D glow eyes and you have a lure that fish can’t and don’t ignore.

Photon Lures is a Proud Sponsor of The Christian Angler Television Show. Check your local cable listings for time and channel. Stop by and visit us at www.photonlures.com.