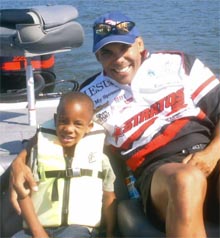 This is really what it is all about. There is nothing like seeing a kid catch their first fish and this was everything Tim Horton promised and more. There were 128 special needs children and adults and underprivileged youths, this was more then Tim had expected so we had to have 2 flights. What a blessing! Before I get into the fun stuff, fishing, I first need to quickly share with you my adventure getting to Wheeler Lake, Alabama. Well it finally happened, the post 911 stress, trauma whatever you want to call it, caught up to me as I was walking down the ramp to get on the plane. The walls started to close in, my mind started to race with terrible thoughts and then I got to the door and froze in my tracks. I looked at the door and thought to myself "once they close that door I can't get off" I panicked, my heart was racing, I couldn't breath, but I didn't want to show that I was freaking out. I slowly turned around and starting walking back up the ramp and was headed out when security stopped me and said you can't leave. I looked him right in the eyes and quietly, but very intensely said I am freaking out I can't get on that plane. He of course told me I am sorry but you can't leave. Long story short, after taking many deep breaths a pep talk from the stewardess and a call with my wife and her saying "think of the kids, do it for the kids." I was able to get on the plane. However I assure you that it wasn't fun. Next, when I was getting on the plane in Chicago, the plane was broken so they de-boarded us and told us we would have to be re-routed and I wouldn't get into Birmingham till 1pm which would mean by the time I got to Lake Wheeler it would have been to late and I would have missed the event. I started to complain to the Stewardess that that was unacceptable; I had to be there etc. Then out of the corner of my eye I saw that I was holding in my left hand my little Bible that I had been reading and I said to myself put it in Gods' hands. No sooner did I think that and was about to apologize for not being understanding, then another stewardess ran over and said we got another plane. Needless to say everything worked out.

As I pulled up there were kids everywhere. I thought to myself this is great. The first person I saw that I recognized was Randy Howell who I affectionately call "The Revster" because his boat is wrapped with the Rev up logo. He pointed me in the right direction then I found my good buddy Gerald Swindle & finally the man responsible for putting this all together, Tim Horton. There was an all-star cast of pros there like Randy Howell, Roger Segel, Roger Schofield, Todd Witt and Ken Dodson to name a few. I was paired with Gerald Swindle and we had two young boys Dylan Cox & Erin King. We were off. Now the rules were we were aloud 10 brim, 1 trash fish (catfish, gar, sun fish etc.) and 2 bass. Gerald's plan was to get the limit of Brim first. I said to Gerald what are we rigging them up with drop shot, Texas rig what. He looked at me and laughing said crickets. I said crickets? Well this was a first for me too but I quickly caught on. The rig was a split shot rig with a 10" leader and a bobber sitting about 24" above the weight. Next bait the hook. Well now this was fun. Just picture Gerald and I chasing crickets around the boat. Lets just say these crickets were in no hurry to have a hook stuck threw them.

Once we finally got the hook baited with the ever-elusive cricket we would cast the rig out in the sweet spot and pass the rod to the kids. The first couple of strikes they missed, my kid Erin set on his first fish with power and technique Kevin Van Dam would have been proud of. Of course that was not effective for catching Brim. After a quick lesson of telling him just to real they were champs and had the limit of brim in about 10 minutes. Then we were off running and gunning for bass. I switched to a drop shot and Gerald to a Texas rig both on spinning reels so it would be easy for the kids. They caught a couple of bass but they were shorts. Then we headed for Gerald's specialty, the docks. I assure you there is no better dock fisherman then "The Swinster" Yeah I know but I can't help giving my buddies nick names. Anyway, this was not only fun but also a great learning experience. Since, Gerald and I would cast for them and hand it to them once it was in the water Gerald was telling me the sweet spots to cast and why and then we started playing a game of seeing who could get it in those sweet spots fastest and most efficiently. Of course Gerald kicked my butt, but it sure was fun. As a matter of fact one of my casts was the perfect cast under the dock in this small opening from about 40 ft. it produced the kids big fish of the day, a sunfish.

Then it was time to weigh in. Gerald let Dylan sit between his legs and drive. We got to the docks and there was mom proud as can be with her camera and the kids screaming, "I caught a fish mom, look, look, look how many we caught." It was truly an awesome moment. After we weighed in I asked Tim is there anybody else who needs to go out. He said I think that is it. I looked around and there was this one little boy standing there with a pole in his hand staring out to the water. I walked over to him and said have you gone fishing yet? His mother quickly said "Oh no he is to little he is not going out." He was only 3 years old. His name was Shokieem Nash. After some serious pleading with the mother and assuring her we would take good care of him, she gave us the go ahead. Tim's good college buddy Ashley Stanford agreed to take us out. We headed for the honey hole where Gerald & I took our kids to catch their limit of Brim. While Ashley was dealing with the crickets I grabbed the Texas rig, put a Yum 5" watermelon shakin' worm and threw it up on the shore and starting working it back to the boat. No sooner then you could say Jiminy Cricket, no pun intended there was that infamous tick. I set the hook and quickly handed the rod to. He reeled it in as he squealed with excitement and flipped it into the boat like a pro. It was a small mouth. His first fish and it was a small mouth bass. Well you don't get much better than that! We had promised his mom we wouldn't keep him long so we took him back in, the whole way he was saying over and over "I caught a fish, I caught a fish!" and smiling from ear to ear.

We finished this already perfect day by all the pros lining up and taking a picture with each and every kid one at a time so that they would have a special memento for this special day. I have said it before & I will say it again there is nothing like the look of a little kid when he looks up at you and smiles that look of triumph, satisfaction, when he squeals with excitement or repeatedly yells, "I did it, I caught a fish." That smile is all those things and more. It's his way of saying "Thank you!" I say to myself no Thank You! Thank you Lord for blessing me with this wonderful blessing. For all of you who have not had the opportunity to give back or say you don't have the time or whatever, I plead with you to make time. You are not only robbing yourself, you are robbing our future. It may be a pleasure or it might test your patience, but I promise you, it truly is a blessing and it will change your life! To me there is no Bass I could catch no matter how big, no tournament I could win, no acting part I could get, no personal victory I could attain, that will match that memory of that little kid looking up to me with that smile. Giving back is not only a blessing it is, in my opinion, an honor and our duty. O.K. I am done preaching, you get my point I am sorry for rambling but as you can see I am very passionate about giving back. . I want to thank Jesus for Blessing me with such an awesome experience. I also want to thank my sponsors Evinrude, Kaenon, Kinami, Kinesys, Phenix, Lowrance, Pradco, Stealth and Stratos.