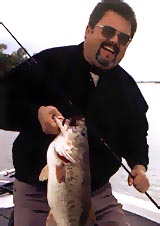 The Fred Hall sportsman’s exposition in San Francisco provided anglers a chance to hear the leaders in the fishing industry. The meeting had about 4,000 anglers in attendance and the information was informative and, for the most part, very positive.

Dave Pheiffer, president of Shimano and current chairman of the American Sportsman Society (ASA) started the meeting by saying how excited he was to see such an amazing turnout for the event. He went on to say that ASA was committed to the market.

Jim Kellogg, president of the California Fish and Game Commission was also present. Kellogg was appointed to the commission in Jan. 2002, he is a long-time supporter of outdoor activities and is a member of the California Waterfowl Association, Ducks Unlimited, the Rocky Mountain Elk Foundation and Outdoor Sportsmen’s Coalition of California, to name just a few of the areas he is involved with.

Kellogg said the commission is committed to making the rules fair. The commission is made up of outdoor enthusiasts, and even, “a couple of people from the environmental community, and that’s OK, too,” said Kellogg.

Ryan Brodderick, director of the California Department of Fish and Game, was a key speaker at the conference. “We must keep a unified voice in the public debates about our sport.”

The California Department of Fish and Game raises their own funds through the sales of licenses and fees. At the Fred Hall show, licenses could be bought at the door and the price included access to the show. Brodderick said, “This show is supporting the department by increasing the sales of licenses. I was told that we couldn’t sell enough to benefit the bottom line. I told them that this isn’t just about the bottom line; we’re going to engage the faces of our customers. We felt, at best, we could sell $10 to $15,000 in licenses, but it looks like we will sell approximately $64,000.”

According to Brodderick, what has assisted the department more than anything has been the passion of the outdoors people in the state. He spoke of the Hot Creek Hatchery operation that had been mothballed due to a lack of funds. The loss of Hot Creek hurt the steelhead population in California and abroad. The community stepped up because they realized the potential of the hatchery and raised the funds needed to reopen the hatchery, upgrading it and making it a true visitor’s center. Brodderick was happy to report that because of the hatchery, there are another 150,000 steelhead back in the river.

“The community took up the challenge and the department helped,” said Brodderick. “There is much more to do, but this is a model we want to develop.

“The people we deal with are passionate about what we do – these people care. I would rather have a diverse and passionate community than one where the people don’t get involved.”

Barry Broderick, a lobbyist for United Anglers, said that until recently the state legislature had to sit through mind-numbing meetings to decide how to manage each species of fish. “The problem with that is that legislators don’t know much about fish and fish don’t vote! Now, under the new administration, fish management is accomplished by the Commission and the Department of Fish and Game working together. It is management by the people who know the industry, not by legislators. This benefits society as a whole.”

Tim Alpers, owner of the Alpers Owens River Ranch and Hatchery, who stocks trophy trout throughout the state said, “People are searching for family values after the events of 9/11. They have realized that we have to keep family traditions.” Fishing is one of the family traditions that more families are turning to. The support of the angling community is vital to the development of the sport and to maintain family values. For that to continue there needs to be a new way at looking at the industry. Corporate assistance in developing and maintaining fish hatcheries, along with community support is vital.

“Berkley (Pure Fishing) has been very supportive because they know that California is the number one market for fishing in the United States,” said Alpers. “The funding for hatcheries is low on the state’s list of priorities. The lack of funding could cause the downfall of California’s hatchery system. When Mammoth residents heard that Hot Creek Hatchery would close, they screamed. They formed a non-profit organization to keep the hatchery open. Now they are making it an economic addition to the community and even developing it as an education center.”

Michael Kelly with NOAA Fisheries said, “The recreational anglers of America need to speak together in a loud voice.”

He passed out copies of the U.S. Ocean Action Plan and said, “The people’s voice is represented in this plan. Recreational anglers are being heard. This is a strategic plan for the recreational fishing community.”

There is still much to do, according to Kelly, “The conservationist voice has been taken away from anglers by the environmental community. Anglers have been cast with the worst offenders as people doing real damage. There is a lot of ground to gain back. But, we’re the one out there and we have to make certain our work is synonymous with ethical management.”

The oil platforms off the California coast are nearing the end of their active life and will start shutting down; the question now is what to do with the oil rigs after they are through pumping. George Steinback with the Artificial Reef Enhancement group said the platforms have the potential of playing a big role in the developing fisheries.

“As the 27 oil rigs off of California approach the end of their useful life some people want them to be completely removed,” said Steinback. “On a closer look, we can see that the rigs have helped many species of fish thrive. We have studied 42 species of Rock Fish.

“We would like to see the tops of the oil rigs removed but keep the reef community they have developed. The oil industry and the government have worked in cooperation in the Gulf of Mexico for years on more than 200 rigs and the results have been positive. Most people support the “rigs to reefs” program – even some environmental groups are starting to realize the importance of the program. We need support to reenergize the Artificial Reef Program so we can continue to grow our fish.”

Mike Nussman, President and CEO of ASA said, “Right now we have the ear of the government, both state and federal – and we need to advantage of it. We cannot succeed with you, the anglers. We have the ear, but to make a difference, we have to speak loudly. We have to decide what is important and with a loud and united voice.”

“Anglers are more conservation minded; this is encouraging; the best days are right now and they will only get better.”

Tom Raftican, host for the event said, “Fishing is a contact sport – if you’re not in contact there won’t be a sport.”