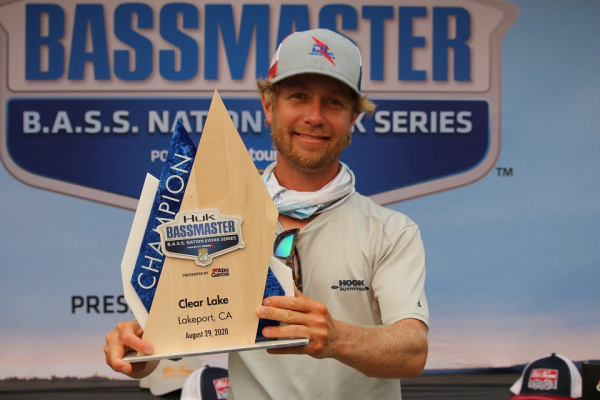 LAKEPORT, Calif. — Dialing in the right type of grass proved essential for Rus Snyders of Nashville, Tenn., who tallied 100 inches of bass to win the Huk B.A.S.S. Nation Kayak Series at Clear Lake powered by TourneyX presented by Abu Garcia.

Having grown up in Northern California, Snyders calls Clear Lake his home waters. That familiarity served him well, as he launched from Clear Lake State Park on the lake’s central west side with a two-stage plan.

“In the morning, I was fishing an area with a combination of grass and rock in 4 feet or less and caught several fish on a black and red buzzbait with a gold blade,” Snyders said. “As the morning wore on, I started fishing some offshore grass.

“I moved offshore around 8 o’clock. The lake started slicking out and the sun started coming through the smoke (from California’s wildfires).”

In the offshore grass, which ranged from 8 to 10 feet, Snyders covered water with the same buzzbait, along with a Keitech swimbait. He also flipped specific grass targets with a Strike King Rage Craw Texas-rigged on a 4/0 hook with a 1/2-ounce tungsten weight and a punch skirt in the sprayed grass color. Snyders alternated between watermelon red and watermelon candy for his Rage Craw.

“The offshore grass was in isolated little clumps about 100 yards offshore,” Snyders said.

“Sometimes, it’s hard battling the wind, but the wind pretty much stayed down all day; and all week,” he said. “It’s been pretty calm conditions out here and that really makes it easier to navigate and fish.

“The run I made was about 3 miles, and I pretty much stayed in that area just south of State Park and Soda Bay. I stayed there for most of the day and bounced around quite a bit. After I got some fish offshore, I’d go back up shallow to give my fish a break.”

Snyders said he saw frequent signs of feeding activity throughout his offshore area.

“I’d look for the boils and the busts and then I’d go over there and try to get them to bite,” he said. “I just kept hitting targets and flipping or casting to some of the ambush points in the grass clumps. Eventually, I’d pick one off here and there.”

Targeting the Lucerne area on the lake’s north end, Moua expected the morning bite to turn on around 10. He had planned to simply burn some time on docks before fishing the rock and grass mix on his main spot, but his morning took a surprisingly productive turn.

“I pull up to the first dock and stick a 20-incher, 5 to 10 minutes after lines in,” Moua said. “I went to the next dock, missed one, fished that stretch for a little bit, came back, threw up against that dock again, but nothing.

“Right as I was leaving, I saw a big blow-up; a bass came up after a shad or something. I fired the frog back over there and stuck another 20-incher. Around 10, I took off to my main spot.”

Moua caught his dock fish on a white Jackall Gavacho frog. On his offshore spot, he flipped a black and blue Reaction Innovations Sweet Beaver and threw the frog.

“I was catching them on a FishLab Rattle Toad (topwater frog) in the natural green color,” he said. “It was hot and heavy first thing in the morning. I had my limit in 30 minutes. Then it was slow for most of the day.”

Doug-Martin said he made a crucial late-day cull that helped his cause.

“With about 15 minutes to go, I went back to shallow grass with the frog and was able to get a 19 3/4-inch bass right at the end of the day,” he said. “That really helped me.”