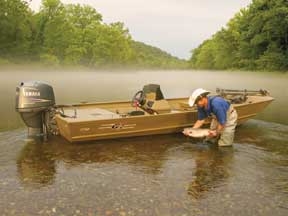 Like most of our readers, I love the fast and quick handling fiberglass bass boats. The new Skeeter boats are comfortable, dry, fast and have deck space like an aircraft carrier. They are fabulous, but they can't do it all. For the rest, the lineup of G3 aluminum jon boats are just the ticket.

I really never gave them much thought until my recent trip to Alaska where regulations limit the amount of horsepower on the Kenai River to just 35. The rocks, trees, gravel and sand bars, eliminate the use of fiberglass. Here aluminum boats rule the river and G3s combined with Yamaha outboards are the combination of choice.

The Yamaha 35-horse four stroke motors were on what appeared to be 85 percent of the boats on the middle Kenai River. Why? Simply because of their performance and dependability.

Launching a boat at a place called Bing's Landing, anglers have to be extremely careful because just a couple hundred of yards downstream are the Naptowne Rapids. These rapids are up to class 4, depending on the time of year. If you launch your boat and it gives you trouble, you will find yourself banging off boulders and praying for your life. The dependability of the Yamaha four-stroke has probably saved a few rides through the rapids.

We had the pleasure of spending several days in either a G3 1756 center console or an 1860 center console. Both boats proved themselves to be extremely stable, even through fast moving water. With three men in the boat they each jumped on plane quickly and handled extremely well. The other part I found amazing was that even in the time when we had triples on and were all being drug around and around the boat, the platform stayed as stable as a rock. And none of the anglers in the boat were less than 200 pounds. Some of us hadn't seen 200 pounds since high school.

Quick handling is vital on the Kenai to avoid rocks, stumps, gravel bars and even other anglers. It's also important when you have a 50-plus pound king salmon on the line and you need to try and get some of your line back.

For bass anglers, the G3 line of Gator Tough boats could be a solid answer for fishing in those hard to reach areas. They can also work very well for a practice boat. With gas prices soaring to more than $3 per gallon the thought of having an 18-foot boat that can run plenty fast with a 35 to 50 horse motor sure looks attractive and can reduce your cost of tournament fishing. Filling up a 6-gallon tank sure sounds better than spending $150 to fill up a bass boat.

I was incredibly impressed with the boats and Yamaha motors are, without question, the most reliable marine motors on the market. Just look at the motor of choice by guides in Alaska where they face the toughest elements everyday, without sponsors.