I’ve had many conversations with non-anglers who are fascinated by the world of tournament angling. Their preconceived notion of fishing involves beer, pork rinds, and night crawlers dangling over the side of the boat. I do my best, as I’m sure you have, to explain the complexities, but it’s still difficult for them to comprehend bass fishing as a competitive sport.

When these same people asked what I did over the weekend, I told them I watched the Bassmaster Classic coverage. In between hearty bursts of laughter their responses ranged from, “What’s the Bassmaster Classic” to “Fishing is televised?” As a matter of fact it is and I sat curled up on the couch with my bon-bons watching as much as possible. Especially since one of our own, Aaron Martens, was once again in contention for taking home the prize.

With the FLW Championship following a few weeks later, I’m all fired up about fishing. At the end of the tournament season, I’m wiped out. It’s a long eight months of travel, pre-fishing, and tournament stress, but I’ve had a rejuvenating summer and have my reels all spooled up.

With the strong media coverage bass fishing has received, I hope others get fired up too. Maybe getting fired up means taking a child to the lake and teaching them to love fishing or taking a parent or grandparent that taught you. Maybe it means taking the plunge and entering your first tournament or learning a new skill that makes you a more versatile tournament angler taking you to the next level.

In my ‘fired up’ frenzy, I decided to take my nieces fishing at Lake Castaic. Courtney, 11, and Taryn, 7, aren’t new to fishing and as I quickly learned, have impressive skills with a spinning reel (Grandpa taught them well).

In preparation for our adventure, I took heed of Tony’s advice in his article “Take a Kid Fishing”: I was prepared for anything and everything, I had my patient-face on, and I was prepared to be as flexible as a contortionist. 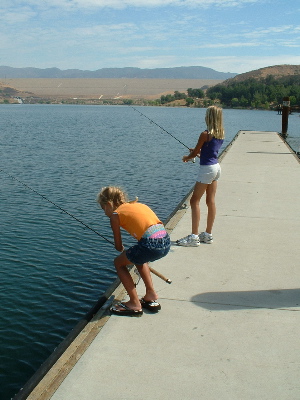 During the drama, Courtney’s fish had spit up a baby bass. It was very dead so I pulled it from the water and showed the girls. Taryn wanted to keep it. Her attention was fading and had now turned to gathering shells and rocks from the shore. She later started a collection of discarded plastic worms. Hey, whatever makes you happy is what I say.

For a change, I decided we should move to a nearby dock and fish from there. While I tied a new drop shot rig for Courtney, she accidentally hit the line sending the hook into my finger (not past the barb; just a poke really but it still hurt like a bugger). “Patience, patience, patience,” I said to myself. My pain quickly evaporated though when I hooked a 3-pounder that the girls were eager to touch, hold, and look at.

We fished a while longer until swimming in the lake sounded more appealing than fishing and looking for treasures along the shore. I think they had a pretty good time and I did too. As Tony said “The purpose of the trip is to enjoy each others company and to help build a child’s confidence in themselves.” Mission accomplished.

A few days after the girls were gone, I happened to be cleaning out my truck and discovered an oxblood worm and a shell stuck in the back door handle. It made me smile.