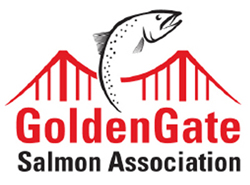 San Francisco -- The Golden Gate Salmon Association (GGSA) submitted formal comments to the California Fish and Game Commission proposing an alternate common sense approach to address the striped bass predation problem. The Commission is currently considering a proposal from the Department of Fish and Game to greatly increase fishing of striped bass in an effort to decrease or eradicate them. The Department made the proposal after being sued over its management of the striped bass fishery by a group of San Joaquin Valley growers calling themselves Coalition for a Sustainable Delta.

The growers brought the lawsuit to deflect attention from their over use of delta water and the steep decline they've sent salmon, smelt and other native fish into. The growers annually siphon huge quantities of subsidized water from the delta for their agricultural operations in the San Joaquin Valley desert. The loss of this water to the delta and bay estuary has badly damaged state and federal endangered salmon and smelt runs as well as commercially valuable fall run salmon in the past decade.

The Department of Fish and Game ended the lawsuit in a settlement in which they promised to develop and promote a plan to greatly reduce striped bass. Before taking effect, the plan must be approved by the State Fish and Game Commission, the final authority in this process. The Commission is scheduled to consider the issue at its February 2nd meeting in Sacramento.

GGSA recognizes that striped bass have coexisted with salmon for the roughly 130 years they've existed in northern California. The comment letter points out there are other predators in the delta that feed on smelt and salmon including largemouth bass, pike minnow and in the case of smelt, a fish called the Mississippi silverside. Striped bass eat the other predator fish, helping to keep their populations in check.

GGSA has hired a top fisheries biologist and told the Commission it would volunteer to work with other stakeholder organizations, the Department of Fish and Game and other fishery agencies to develop a more comprehensive predator management proposal and bring that back to the Commission to consider in place of the Department's proposal.

"The current DFG plan simply proposes to destroy striped bass without addressing the root causes of much of the predation. We can do better," said GGSA Director Dick Pool. "We don't think the Fish and Game proposal is the right answer for either stripers or salmon. We're asking the Commission to let us take a shot at working up a more comprehensive plan that gets at the broader predation problem while recognizing that all the species in the delta affect each other."

"If more natural delta flows were returned where most of the water moves west towards the bay and ocean instead of south to the pumps, salmon and other migrating fish would return to their natural migration path and would not be pulled into the open channels of the central delta where they are easy prey for dozens of predators including striped bass," said GGSA Director Roger Thomas.

GGSA supported the findings of UC Davis scientists Dr. Peter Moyle and Dr. William Bennett who told the Commission that reducing the population of striped bass is most likely to have a negative effect on migrating native species. They point out that this type of plan is inadvertently playing roulette with basic ecosystem processes that can change in unexpected ways in response to reduced striped bass numbers.

GGSA's comments also alert the Commission that destruction of the striped bass populations will have a devastating impact on anglers and the fishing industry. Hundreds of businesses and thousands of jobs depend on the striped bass. Precise estimates of the economic impact of striped bass have not been made but conservative estimates rank it at more than a billion dollars annually.

"GGSA and the salmon industry strongly oppose fisheries management by the water contractors, which is basically what is happening here," said GGSA President Victor Gonella. "We propose that their plan be soundly rejected by the Fish and Game Commission. Any other course of action simply invites more lawsuits against other predators like black bass or lawsuits to shut down the salmon fishing industry."

To read the GGSA letter to the Fish and Game Commission go to: www.GoldenGateSalmonAssociation.com . On the right under News, click on Striped Bass Alternative Letter