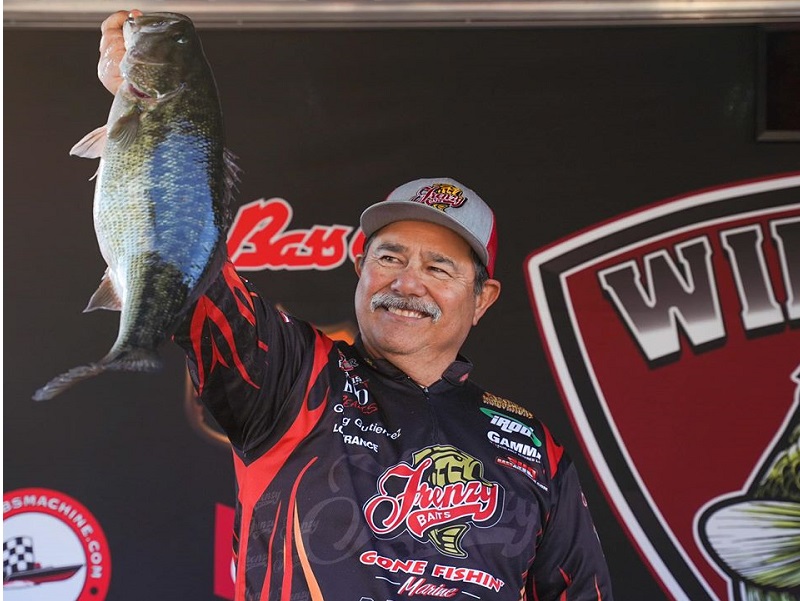 Gutierrez, the reigning WWBT Angler of the Year (AOY) reeled in 12.88 on Day One, anchored by a 3.85 kicker, putting him in 4th place for the start of the three-day event.  Adding 10.64 on Day Two, he made the top-10 field cut for a final day of fishing. Blasting off in 8th place on Day Three, Gutierrez returned to the scales with 15.48, the biggest stringer of the event.  His three-day total of 39-pounds earned the angler known as “Double G” the top-spot and $25,500, including contingency dollars from Yamamoto and P-Line and a custom, one-of-a-kind Buck Knives trophy.

According to Gutierrez, his 30-plus years of experience on the lake and specific adjustments helped him navigate his way to victory.

Gutierrez reported throwing a Frenzy Baits Nail and a prototype dart head for the majority of his fish.

“They were eatin’ the Nail; but when the weather started to change, they started eatin’ it kind of funky,” he said. “It was like I could hardly tell that there was a fish there.”

That subtle change in the feel of his bite was what prompted Gutierrez to make an adjustment to the dart head.

“They just weren’t really getting’ a good grip on that Nail,” he said. “I felt the fish I needed were deeper and they required a more finesse presentation. I had the same exact setup ready to go on a dart head; so, when they wouldn’t eat the Nail right, I changed it up and instead of standing it up, I was laying it down.

“The dart head is something that I am still doing R and D on, but I do hope to bring it to the public at some point. It's something that I have been refining and why I developed the iROD G2 Ultra Finesse rod that was released last year. It’s part of a whole system. It’s a longer spinning rod with a more moderate tip into a fast backbone that has got enough power to full big fish, but still really soft to allow them to get the bait in deep.”

He threw a variety of plastics, including the Reaction Innovations Flirt in 6.95 and 4.95, scaling up as needed. Other soft baits were used for a range of color selections required to tempt the bite.

Gutierrez was spooled with 6-pound-test.

“I used Gamma Edge, because the teeth are really coming out on the fish right now and they really grind up a lot of other lines,” added Gutierrez.

A super-slow retrieve was a must.

“Sometimes enthusiasm or excitement can make guys move the bait faster,” said Gutierrez. “I noticed if I moved the bait more, the bite was more subtle; but if I moved it slower, the bite was firmer and more pronounced. That told me I needed to slow down and keep it slow.”

A total of 20 spots were on the Gutierrez run, including the McCloud, the Pitt, the Squaw, the main body and part of the Sac arm.

He revealed the most productive areas were near the mouth of the Pitt and the Squaw; but added that there were good numbers of better-quality fish in isolated areas that he had located in the McCloud.

“I started in one area in the morning to try to get a good limit," he said. "I knew the place would have a good limit for both my co-angler and I and I felt getting that would settle both of us down, so we would be able to fish comfortably. I really didn’t want to run all the way up the Sac arm; but I did today.

“After we got our limits, we started running some bridge pilings, and pockets and it turned out the pilings pattern kicked couple of the right fish. I fished deep structure on breaks and deep points covering water, not just bridge pilings. Those were just a few spots along the way.”

The predominant depth for his fish was in the 45- to 60-feet range.

“I also spent a lot of time casting shallow too,” he said. “I hit that 10-foot range to see if there were fish up there and there was. This was especially so in the first hour and then as the time progressed, I would fish deeper to find the better-quality fish.”

If the sun was right and the wind was right, I would hit the pilings and the better fish came from that.”

His 5-plus Big Bass, fell to his lure at about 1030 a.m. on Sunday. Viewers can expect to see it in the WWBT TV broadcast, as the camera boat joined him only five minutes before it struck.

The average number of fish that Gutierrez caught was between 60 and 70 a day.

“I’m guessing that number, but because there was so many, I couldn’t even try to count as it was happening,” he commented.

The WWBT win for Gutierrez has been a long-time goal.

“It was something I’ve wanted to do since it began,” he said.  “This year, I was given the advice to be the wolf, a little more aggressive and assertive to get what I needed to do done. I took that as my mantra. I set out to press harder on myself to make it happen. I took more effort into putting it in my head that I needed to move more and do it faster. I couldn’t stand by and wait for things to happen, I had to make them happen.  That helped me make the difference.”

Gutierrez has already started spending his winnings, adding a new pup to the fam.

“It is a new bestie for the pup, my wife, Bobbi and already had.” concluded Gutierrez. 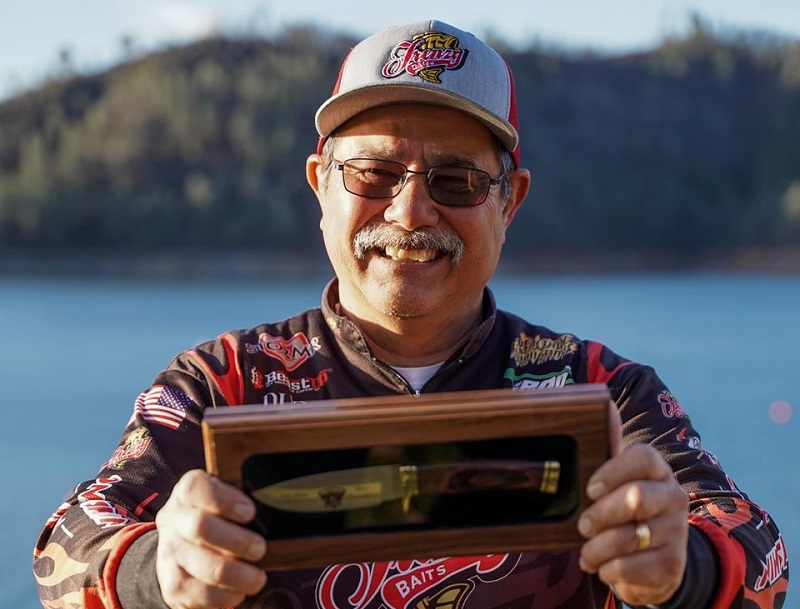 The next WWBT Pro/Am will blast off on New Melones on February 26 – March 1.