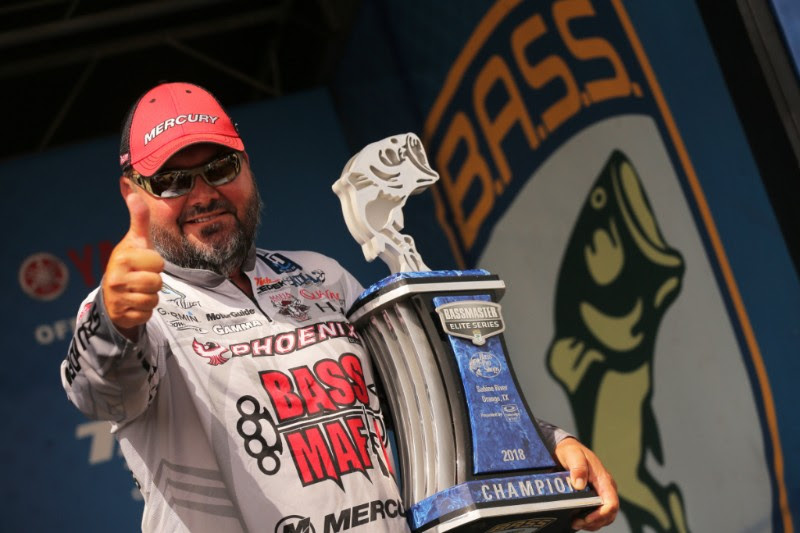 Greg Hackney of Gonzales, La.., won the 2018  Bassmaster Elite at Sabine River with a four-day total weight of 48 pounds, 5 ounces.

ORANGE, Texas — If the Bass Pro Shops Bassmaster Elite at Sabine River presented by Econo Lodge had been a five-day tournament, the outcome might have been different.

But it was only four days — and Greg Hackney owned it from start to finish.

Despite exhausting his best fishing areas the first three days and bringing in only 7 pounds, 5 ounces to the weigh-in stage on Championship Sunday, Hackney claimed his sixth career B.A.S.S. victory in wire-to-wire fashion with a four-day total of 48-5.

“If we’d had to fish another day, I probably would have hunted and gone to some new water,” Hackney said. “I really don’t think all of the fish were gone. But we had all of that rain Saturday, and my best place had a couple of drains running into it.

“The water wasn’t dirty, but the water temperature dropped to 80 degrees after being in the 90s the first three days.”

That drastic drop in the water temperature brought those tactics nearly to a halt today, and he had to switch to the technique he is most known for — flipping. When he flipped heavy cover, he used a Strike King Rage Bug in the Bama Craw color.

BASSTrakk, the unofficial leaderboard that fans can check on Bassmaster.com throughout the day, showed Hackney with only two fish several hours into the final round. But he said he always knew he could fill out his limit flipping — even if the fish he was catching with that technique were running much smaller than his topwater fish.

“I really was amped up a little bit today, and that’s why I got a lot quieter, said Hackney, laughing. “I always have a lot more to say when things are going right.

“But in the back of my mind, I knew I could pick up a flipping stick and catch a keeper anytime.”

His two best fish still came on the frog. But when he switched to flipping, he caught 10 keepers in 45 minutes.

“I probably should have done that sooner, but I just felt like I would have been punting,” he said. “Out of those 10 keepers I caught in the last 45 minutes flipping, they were all about 12 to 12 1/2 inches long.

“That’s why I won. When a lot of other guys were dialed into that this week, I was fishing for those bigger ones with the frog and the buzzbait.”

While some anglers ran as many as 300 miles a day roundtrip, Hackney fished close to the launch site at the City of Orange boat ramp. He said he only burned 11.6 gallons of gas all week.

Before the tournament, Hackney predicted it would take “48 pounds, about 12 pounds a day” to win. He’ll take home the giant blue Elite Series trophy after weighing in 48-5.

“I thought I had an opportunity to have a good tournament, but I didn’t know that I would have a shot to win,” he said. “I knew I was going to be around a lot of other guys, and it’s hard to win in a crowd.

“Catching that 5-14 on the first day got me off to a good start. Even if I hadn’t caught that fish — if I had just weighed in four that day — I would have still been leading going into today. But that fish helped me start just the way I needed to.”

Alabama pro Gerald Swindle finished second with 43-11, and Keith Poche, a Louisiana native who grew up fishing the Sabine River, placed third with 43-0.

Brent Chapman of Lake Quivira, Kan., the 2012 Toyota Bassmaster Angler of the Year, retained the lead in his quest for a second AOY title. Chapman, who finished 37th at the Sabine River event, has 456 points. Bradley Roy of Lancaster, Ky., is second with 427, and Hackney, who was Angler of the Year in 2014, moved into third with 422 points.

Poche earned the Power-Pole Captain’s Cash Award of $1,000 for being the highest-placing angler who is registered and eligible and uses a client-approved product on his boat.

Brock Mosley was awarded $1,500 dollars as the winner of the Phoenix Boats Big Bass award. He had the largest bass of the tournament with a 6 pound, 3 ounce lunker on Day 2.


About B.A.S.S.
B.A.S.S. is the worldwide authority on bass fishing and keeper of the culture of the sport, providing cutting edge content on bass fishing whenever, wherever and however bass fishing fans want to use it. Headquartered in Birmingham, Ala., the 500,000-member organization’s fully integrated media platforms include the industry’s leading magazines (Bassmaster and B.A.S.S. Times), website (Bassmaster.com), television show (The Bassmasters on ESPN2), radio show (Bassmaster Radio), social media programs and events. For 50 years, B.A.S.S. has been dedicated to access, conservation and youth fishing.