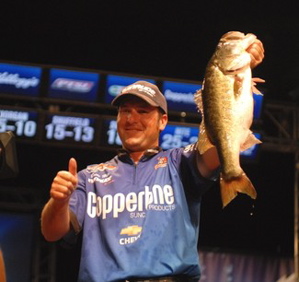 KISSIMMEE, Fla. (March 2, 2008) – Coppertone pro Brett Hite of Phoenix, Ariz., caught a final-round total of 10 bass weighing 38 pounds, 9 ounces to win $125,000 in the $1 million Wal-Mart FLW Tour season opener on Lake Toho by the largest margin of victory in the history of the FLW Tour. Hite topped his closest rival, Carl Svebek III of Siloam Springs, Ark., by 20 pounds, 4 ounces to earn his first tour-level victory in just his second season of competition.

“This is what I have been striving for in my career,” said Hite, whose first taste of victory came in 2003 at the Stren Series Western Division tournament on Lake Pleasant in Peoria, Ariz. “To win an FLW Tour event is just a dream come. You don’t get the opportunity to be in a position to win a tournament like this very often. When you do, it’s just an awesome feeling.”

“I’m ecstatic about setting the record,” Hite said. “Fishing against this caliber of fishermen and to be that far ahead going into the last day is unbelievable. These guys are the best of the best. To have that much of an edge on these anglers is just amazing.”

The largest margin of victory was previously set at 13 pounds by Ray Scheide of Russellville, Ark., in 2004 on Lake Okeechobee.

Throughout the tournament Hite keyed on lanes cut through thick hydrilla in Kissimmee Lake. These lanes in the vegetation held big bass that could not resist Hite’s Phoenix vibrating jig – a Chatterbait-like lure with a green-pumpkin skirt and black blade. Hite also alternated between a swimming Senko and a Yamamoto 6-inch twin-tail as trailers. “It looks like a baitfish coming through the water,” he said. “But the fish also seemed to be keying on the bait’s vibration.”

Hadden also earned $1,000 for the overall Snickers Big Bass award in the Pro Division thanks to an 11-pound, 9-ounce bass he caught on Wednesday. Hadden’s big bass was the heaviest of the two-day opening round.

Shuffield, who fishes for PTSI Quality Transportation, was extremely grateful to have his son, Spencer, join him in making the top-10. Spencer, who was shot during a hunting accident in November, finished sixth in the Co-angler Division, which concluded Saturday.v “This week has been one of the greatest highlights of my fishing career. To share the top-10 weigh-in stage with my son at the same event is just awesome, especially with what happened to him this fall, Shuffield said. “Just to have him here is a miracle, but to think that we both made the top-10, I’m overwhelmed with how happy I am, and I hope this is the first of many.”

Tournament pros aren’t the only ones winning big this season. With the introduction of FLW Fantasy Fishing™, which offers $7.3 million in cash and prizes, FLW Outdoors® presents anyone with the opportunity to land the catch of a lifetime. Players in the lucrative new fantasy sports league can become virtual pros by signing up for Player’s Advantage, which provides exclusive insider information that could guide them to a $100,000 victory at every FLW Tour stop and the Forrest Wood Cup. Player’s Advantage will give them an edge over the competition and increase their shot for a $1 million cash grand prize that will be awarded to the FLW Fantasy Fishing cumulative points winner. Those who visit FantasyFishing.com today can sign up for Player’s Advantage and receive a complimentary $15 Wal-Mart gift card. v On Saturday, Bryan Talmadge of Pell City, Ala., and Todd Lee of Jasper, Ala., each caught 6 pounds. Talmadge, who had five bass, won the tiebreaker to claim the Co-angler Division title and $20,000. Lee won $10,000 for his second-place effort that included just three bass. Ties are broken by day-two standings in the Co-angler Division.

“I knew in practice that I would win the tournament,” said Talmadge, an FLW Tour rookie. “In practice I fished a different lake everyday and a lot of different ways. When it came tournament time, I felt like I was prepared no matter where my pro decided to go. That gave me the confidence I needed.”

Coverage of the tournament will be broadcast to 81 million FSN (Fox Sports Net) subscribers in the United States as part of the “FLW Outdoors” television program airing March 30. “FLW Outdoors” is also broadcast in Canada on WFN (World Fishing Network) and to more than 429 million households in the United Kingdom, Europe, Russia, Australia, Africa, Asia, and the Middle East through a distribution agreement with Matchroom Sport, making it the most widely distributed fishing program in the world. The program airs Sunday mornings at 11 Eastern time in most markets. Check local listings for times in your area.

The next $1 million FLW Tour stop will be held on Lewis Smith Lake in Jasper, Ala., April 3-6.

FLW Outdoors, named after Forrest L. Wood, the legendary founder of Ranger Boats, is the largest fishing tournament organization in the world. In 2008 alone the organization is offering more than 90,000 anglers the chance to win over $40 million through 230 tournaments in 10 circuits targeting bass, walleye, redfish, kingfish and striped bass. FLW Outdoors is also taking fishing mainstream with the largest cash awards in the history of fantasy sports, $7.3 million.