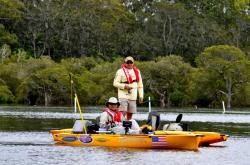 Oceanside, California - Sponsors for the upcoming second annual Hobie Fishing World Championship reads like a who's who of the fishing world. Hobie Cat Company is teaming up with Daiwa® and Lowrance® Electronics as the "Worlds" comes to Austin, Texas, November 4-9, 2012. Both visionary companies were instrumental in the 2011 Port Macquarie, Australia inaugural event that helped set the stage for an annual international kayak fishing competition. The first event was such a success that Hobie Cat, Daiwa and Lowrance have been joined by new corporate partners including Columbia®, Gamakatsu®, Hobie Polarized and Ram® Mounting Systems. All seven companies will contribute to make the Texas event possible and have generously contributed to the prize pot that will go along with the coveted World title.