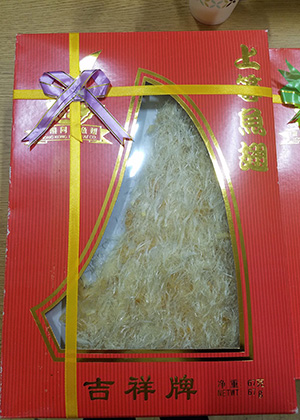 PORTLAND, Ore.—Illegal shark fin sales in a Portland grocery store marks the first conviction under an Oregon law that prohibits possession, sale, trade or distribution of shark fins. The June 4 conviction calls into play a law created in 2011 to preserve vulnerable shark populations.

Agnes Yu, 52, of Happy Valley, pleaded guilty to one count of possessing, selling, or trading shark fin, after selling dried shark fin through Wing Ming Herbs, a specialty food store in SE Portland that she and her husband own. She was sentenced to 12 months bench probation, $1,000 in fines and $360 in restitutions for the Class A Misdemeanor.

The case was prosecuted by the Multnomah County District Attorney’s Office, with assistance from the Environmental and Cultural Resources Enforcement Unit of the Oregon Department of Justice. The plea and sentencing, presided over by the Hon. Christopher Marshall, concluded and investigation that lasted over a year and involved Oregon State Police Fish and Wildlife Troopers (OSP F and W), and the National Oceanic Atmospheric Administration (NOAA). An undercover informant was instrumental in discovering and then making the case.

Marketing shark fin, like many illegal endeavors, is through word-of-mouth. When an anonymous source approached OSP F and W Troopers and said they had heard Wing Ming Herbs was selling shark fin, detectives enlisted the source as an undercover informant to assist in a sting operation. According to OSP Lieutenant Ryan Howell, on Jan. 23, 2018, the informant was able to record the purchase of six packages of dried, processed shark fin from Yu. Yu was not cited for the offense until September of 2019 due to a separate investigation by the US Fish and Wildlife Service.

Shark fin is a delicacy in some cultures and broth made with the fin is traditional fare for weddings and other occasions. Large single fins are most prized, with trimmings from those fins creating a lesser product. DNA testing of the dried fins from Wing Ming Herbs returned trimmings from five shark species: Blue shark, black-nose shark, Caribbean sharp-nosed shark, small tail shark and small eye hammerhead shark.

Blue sharks are native to Oregon waters. NOAA’s test results did not distinguish whether the blue shark in the packages was from Oregon waters or elsewhere in the Pacific.

US laws forbid animal parts trafficking. Trafficking of shark fin is both damaging to global populations and difficult to detect. Oregon sentencing standards are tougher than Federal guidelines and Yu’s sentencing reflects Oregon’s strict laws against selling, trading or distributing shark fins. The Oregon Zoo, which is a member of the Wildlife Trafficking Alliance and partners on a range of policy, awareness, and enforcement efforts to combat the illegal wildlife trade, is pleased with the conviction, according to Zoo Director Don Moore.

“Now, poachers and traffickers are finding it harder to find safe haven in our state, and the timing is critical. This case shows that Oregonians can and will take action in our own backyard to protect endangered wildlife around the world,” said Moore.

A lot has changed for illegal wildlife trade and poaching in Oregon, according to Dr. Sristi Kamal, Senior NW Representative with wildlife advocacy organization Defenders of Wildlife. “Defenders’ work in protecting wildlife species doesn’t stop at the border,” she said. “Timely enforcement and prosecution can go a long way in acting as a deterrent to both the demand and the supply of the illegal wildlife trade. We can prevent the treatment of wildlife from different parts of the world as mere commodities to trade in our state,” Kamal said.

ODFW Stop Poaching campaign coordinator Yvonne Shaw agrees. “When people create avenues for illegally selling imported wildlife, it creates the infrastructure for Oregon wildlife like bears, raptors, turtles and sturgeon, to be illegally traded as well,” she said. “This is a win not only because it stopped wildlife trafficking in one location, but also because it weakens those illegal networks.”