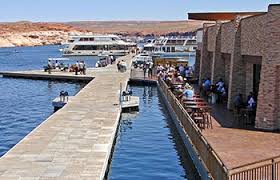 SALT LAKE CITY — After temporarily suspending professional, hot water decontaminations at Lake Powell due to COVID-19 concerns and instead implementing a mandatory 30-day dry time to prevent the spread of invasive quagga mussels, the Utah Division of Wildlife Resources will reinstate inspections and decontaminations for watercraft when Lake Powell boat ramps reopen.

Because boat inspections and decontaminations require close physical proximity and interaction between the boater and agency staff, the DWR issued an emergency order on April 1, temporarily suspending inspections and decontaminations amid COVID-19 concerns. The division instead required a 30-day dry time before boats could launch at other Utah waterbodies. The National Park Service then closed boat ramps at Lake Powell on April 6.

On May 1, the National Park Service at Glen Canyon National Recreation Area announced that a phased approach to increase access was continuing, and beginning May 8, the Wahweap and Bullfrog boat ramps at Lake Powell will be reopened to all boats for day use on Friday, Saturday and Sunday. The National Park Service also announced that beginning May 15, Wahweap and Bullfrog boat ramps will be open seven days a week and for overnight use. Beginning May 22, the Halls Crossing and Stateline boat ramps will be open full time.

“Boaters should be aware that these modified protocols will take longer than a normal inspection or decontamination because they have been developed to minimize interaction between individuals,” DWR Aquatic Invasive Species Coordinator Nathan Owens said. “As a result, boaters will likely have longer wait times while exiting Lake Powell and also while launching at other Utah waterbodies. We ask for your patience during this time, as protecting the health of our staff and the public, and preventing the spread of quagga mussels are both very important.”

Boaters will be asked not to approach staff performing the inspections and decontaminations, so social distancing recommendations can be maintained and neither individual is put at risk.

In addition to receiving an inspection when leaving Lake Powell, boaters can also help prevent the spread of quagga mussels by doing the following:

? Clean: Boaters should wipe all water, mud, plant materials and other debris from their

boats. In particular, make sure to inspect the anchor and sea strainer.

? Drain: Boaters are required to pull all drain plugs and leave them out during transport

and storage after boating on Lake Powell. All water should be completely drained from

should drop the lower unit to drain those areas, as well. Also, inspect the cooling intake

or water system on the boat.

water at all times, and therefore, will need to meet a 30-day dry time if not professionally decontaminated.