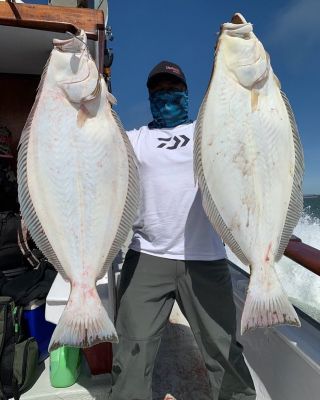 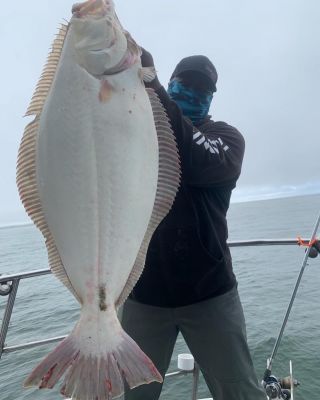 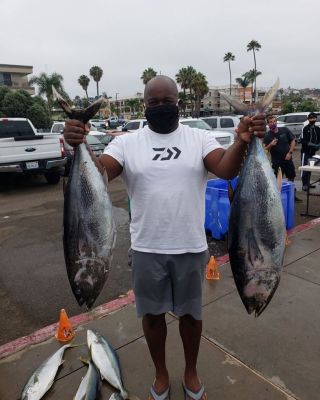 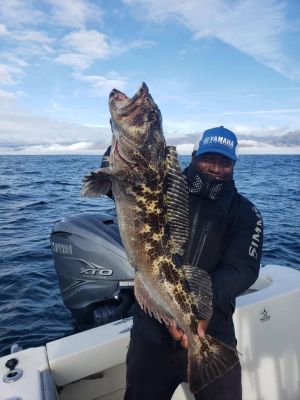 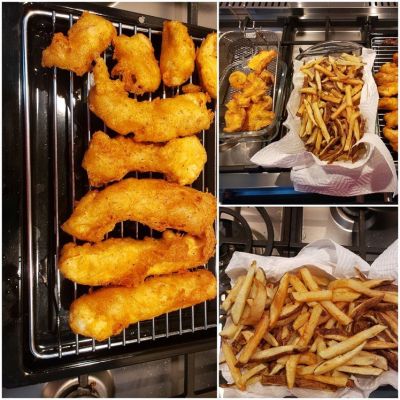 Most fishing fans know Ish Monroe for his success on the professional bass circuits over the years, but he's just as comfortable in saltwater. While he loves both types of fishing, saltwater fishing is a real passion and he goes up and down the West Coast in search of the best bite when he's not away chasing bass.

Right now, he's getting in on a hot halibut bite near his home in the Bay Area and soon, he'll shift to tuna fishing further south and then back for the excellent lingcod fishing closer to home.

Not long after Monroe returned from Florida for the Major League Fishing "Heavy Hitters" tournament, he was out on the California Dawn, taking advantage of the Bay's halibut bite. He reported that the fishing is excellent for both numbers and big fish right now.

He had great success with a freshwater bass rod, the 8' Brent Ehrler Deep Cranking rod that is part of the Daiwa Tatula Elite lineup. This proves that bass anglers can effectively put their rods into double-duty when venturing into saltwater.

"That rod has a great parabolic bend and is perfect for halibut fishing," he said and added that his best halibut on the day was nearing 25-pounds, with others over 20-pounds.

He paired the rod with a Daiwa Saltiga 15 reel with 30-pound Daiwa J-Braid while fishing live bait. "You can catch them anywhere from 15- to 60-feet, depending on where you are in the bay and what the tides are doing," Monroe said.

Monroe has become a big fan of the Saltiga lineup and uses them for most of the saltwater fish he chases.

"The Saltiga is a round reel and the 15 size is smaller than most bass swimbait reels and it is a very durable reel with an aluminum frame to withstand the saltwater environment," added Monroe.

Monroe also shared that the salmon fishing has been great and although he's not a fan of trolling, there is a good bite to be had.

"Guys are going out and are back by noon with their limit, the fishing is phenomenal right now," Monroe shared. "Plus, we'll have a great lingcod bite for summer and that is fun."

In between tournaments, Monroe is always looking to get out in the salt and has an upcoming tuna two and a half-day trip planned on the Vagabond out of San Diego.

"The tuna are biting and I'll be out there fishing with sardines and a Daiwa Saltiga SK jigs," he said. "I use the Saltiga in the 30 to 50-sizes and like the Proteus rods. I use anywhere from 30- to 80-pound Daiwa J-Braid."

Over the years, Monroe has caught countless big tuna with his reels and says they are still going strong after three seasons.

"They are very durable and the best saltwater reels, in my opinion," Monroe said. "I've caught hundreds of tuna on them and they withstand the abuse of saltwater. They are very salt-resistant, all I do is hose them down with freshwater when I get back to the dock."

Monroe is anxiously awaiting the hot lingcod bite that he says happens every summer and he's looking forward to throwing swimbaits for one of the tastiest fish in saltwater.

"I fish a lot of 8" and 12" swimbaits on six or eight-ounce jigheads. You get more bites with the 6" bait but the really big ones like the bigger baits," added the pro bass angler who is known for his big-fish mentality.

He fishes the swimbaits on a new reel from Daiwa, the Tatula 300. "That reel will be out soon and it is great for freshwater and saltwater swimbaits. I fish it on my 8' heavy Daiwa Tatula Elite rod and spool the reel with 65-pound J-Braid," Monroe said.

One of the biggest benefits of a good day in saltwater is eating them, of course. Monroe has been making the most of his halibut success with beer-battered halibut and hand-cut fries lately.

"I have a fryer at home and a portable one that I take with me on the road in my RV when traveling to bass tournaments," he said. "I've tried them all and think the best beer for beer batter is an IPA. I have been using the Blah Blah Blah IPA from 21st Amendment Brewery lately," he shared.

Once the tuna bite starts up, he'll be eating plenty of poke and sushi, as he believes this is one of the best parts of tuna fishing, especially when prepared right on the boat.

Monroe loves fishing in general, but saltwater fishing really gets him fired up. The good news for him, and anyone wanting to get in on the action, is that the fishing this year is shaping up to be excellent.