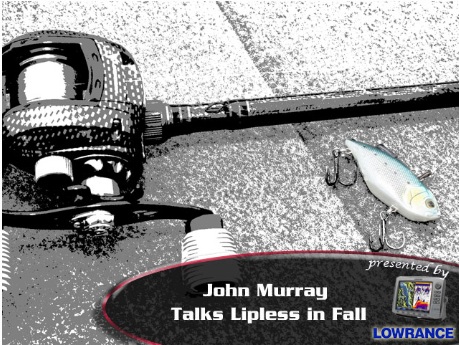 The shad frenzy is on.

Baitfish everywhere, a flipping, flopping swirling mass of bodies billowing beneath the surface feeding on plankton and driving bass and bass anglers nuts. The sheer amount of baitfish flitting about in the tributaries can be enough to make a bass angler's eyes bug out like Marty Feldman.

We've all tried to approach these fish with topwaters, swim jigs, vibrating jigs and soft plastic jerkbaits to varying degrees of success. One day we smash their butts, and the next day we can't seem to sniff a bite.

Bassmaster Elite Series pro John Murray knows the frustration, and he has a fallback that he has used for several years that has produced when others don't; that lure is a lipless crankbait.

"I use all of the favorites when the bass are chasing shad in the fall," he said. "But, I often turn to a lipless crankbait when there are a lot of shad in an area, and I can't get the bass to bite surface lures."

Where?
In the early to middle part of the fall, Murray looks for the standard places that bass will be. "I follow the shad into creeks like everyone else," he said. "But, I look for flats along the creek arms that have ditches running through them."

He said those ditches are what bass will use as highways to and from the shallows of the creeks and it helps him to pinpoint their whereabouts. "If I can find ditches that have some sort of cover on them, those are the best," he said. "Rockpiles, grass clumps or stumps that are on the edges of the ditch are the perfect places to target bass waiting for a meal."

Equipment and Lures
Murray is a big fan of fiberglass cranking rods for this application. "I've really grown to like the combination of a fiberglass rod with good backbone and a light tip and 30-pound-test braided line for my lipless crankbaits," he said. "I get the feel of the braid with the give of the glass and that seems to make for a great combination for hooking and landing fish."

His lure of choice has become the River2Sea Twin Vibe lipless crankbait. It is a 5/8-ounce bait with a profile that is slightly smaller than a standard 1/2-ounce lipless bait. The Twin Vibe also features a dual position line tie. tie it on the front one, and it tracks shallower, tie it on the rear one and it wants to run deeper.

The rule of thumb for Murray in choosing colors in the fall is to go with as bright of a chrome color he can get. "Shad are really highly reflective," said Murray. "The create a lot of flash in the water when they swim, and I want to mimic that same thing when I throw a Twin Vibe."

His color choices are Aurora Black for water that is clear to stained, then he turns to the Pearl White color if the water gets some color to it.

Speed is Key
Murray said that he relies heavily on speed this time of the year. "Shad really moves quickly through the water column," he said. "So, to get the response you want from the fish, it's best to get the bait moving and keep it moving fast."

He said that he used this approach in winning the 2003 Bassmaster Open Championship on Toledo Bend Reservoir. He said that he found quality bass on the flats holding near stumps, but that he had a hard time getting them to bite with any regularity. "I was really searching for things that would make them bite, and I picked up a lipless crankbait," he said. "When I started reeling it past the stumps at a really high speed, I started getting bites."

That was the key component he needed to trigger bites, and he ended up winning the tournament.

Opposite Late Fall
As the winter draws closer and the water temperature plummets, Murray turns to a lift and drop retrieve to trigger strikes from bass feeding on dying shad. "Shad really slow down in the cold weather, and they begin to flutter and die," he said. "That's when I turn to the River2Sea Tungsten Vibe, and I pump the lure off the bottom and let it fall back down."

His choice of the Tungsten Vibe is because the lure features a tungsten face that helps the lure stand up on the bottom and wag side to side as it falls. "Bass really like that action in the cold weather," Murray said.

Choose Quality Hooks
The one tip Murray said was important was to use high quality hooks on the baits, especially when anglers choose to burn the bait. "I change out my hooks to Owner Stinger trebles because they are so sharp and strong," he said. "Bass really crush these lures and you need good hooks to keep from bending them out."