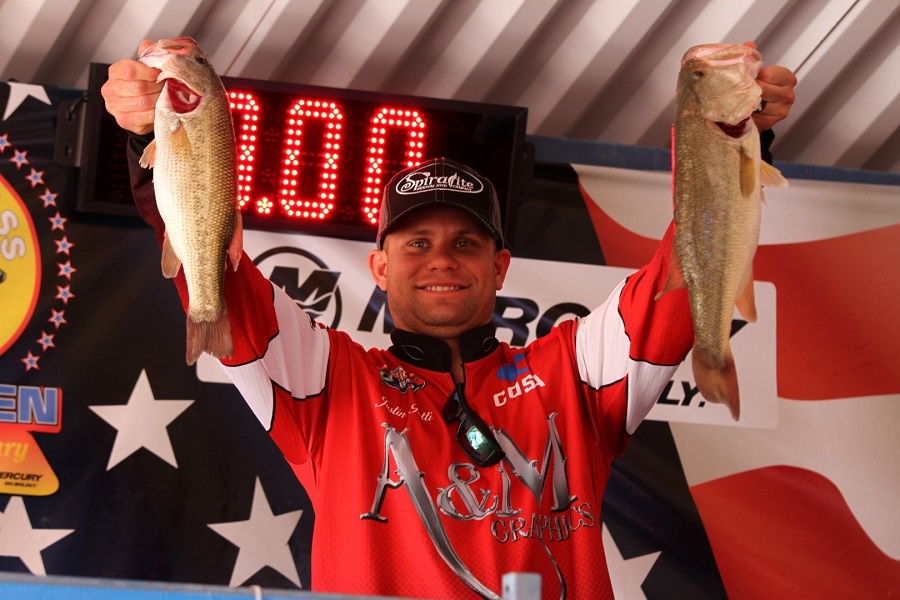 Las Vegas, Nev. –A little over a year ago, Justin Patti left Callville Bay Marina on the second day of the WON Bass U.S. Open in the lead.  By the end of the day, he had succumbed to the wild swings that Lake Mead’s fishing is known for.

2017 has proven to be a different year for the Arizona pro.

After opening the event with a stellar 14.71-pound limit, Patti took last years’ experience and made all the right moves to post a 13.00-pound limit that pushed his two-day weight to 27.71 pounds.  His second consecutive strong day increased the margin of his lead to nearly three and a half pounds over second place pro Kyle Grover of Rancho Santa Margarita, Calif.

His performance helped him nearly match the goal weight he set for himself for the three day event – in two days.  “I started this event hoping to catch 10 pounds a day to have a shot to win,” he said.  “I didn’t expect to be catching this quality of fish, I’ve had two great AAA partners, and we’ve worked really well together to make it happen.”

Despite his lead, he said he feels a little pressure, because his area is as well.  “There are a lot of boats in my area, and while everyone is working well together, I can tell it is having an effect,” he said.  “I’m doing a few different things and I’m ready to make an adjustment, I just hope that I can make the right adjustments to finish this off.”

While a three pound lead is big on Lake Mead, Grover finished the day with a total weight of 24.25 pounds after his 11.74-pound limit on day two.  The young pro - a veteran of many entries in this event - knows that he has a chance. “I found something on the first day of the event that really worked out well,” he said.  I’m fishing some deep grass that I have pretty much to myself, and I think if I lean on it a little, I might be able to catch a few more good ones.  If that doesn’t pan out, I have a couple areas I can go to; it’s going to be interesting.”

Third place went to Phoenix, Ariz. pro Brett Hite, who made a second day charge with a 14.23-pound limit that brought his two day total to 24.13 pounds.  He feels that his experience, and the fact that he is fishing his way gives him an advantage.  “I’m catching them in a way that I’m really comfortable with, and I’m kind of off to myself,” he said.  “I’ve been in this situation before in big events on the FLW Tour and the Elite Series and I feel like I know how to keep myself focused and deal with the pressure; I feel pretty good about my chances.”

Utah pro Travis Jewell slipped a bit, but his 9.77-pound limit brought his total weight to 22.99 pounds, good enough to finish fourth on day three.  Rounding out the top five was Sean Coffey, who had 9.95 pounds on day one, but upgraded to 12.78-pounds to bring his total to 22.73 pounds.

The AAA Division is being led by Aaron Haring with a total weight of 24.27 pounds.  He is followed by Bret Nagelhout who placed second with 24.18 pounds with 24.18 pounds.  Third place AAA Levi Samz worked with his day-two pro Jeff Martineau to weigh 15.16 on day two to bring his weight to 23.53.  Yoshikasu Komada ended the day in fourth place with 22.28, and he is followed by Johnny Limbrick in fifth with 22.13 pounds.

The Costa See What's Out There Live Coverage will continue to bring the rest of the action from Las Vegas and Lake Mead on Wednesday. You can go to WonBass.com to connect and watch the live streaming video on the following schedule – ALL TIMES PACIFIC.

In conjunction with the event, Bass Cat Boats will continue to host demo rides in their newest boat; the Lynx, powered by Mercury at Calville Bay on Monday and Tuesday following weigh-in.  The public, and event competitors are invited to take a ride in their flagship vessel, the one with the longest running pad in the industry from 5:30PM to 7:00PM Pacific Time

Once again, the Costa Live Show will bring all of the action of the 2017 WON Bass U.S. Open presented by Bass Coat Boats and Mercury.  The Costa Live broadcasts will continue with the On the Water, weigh-in and post-game shows carrying on through the awards presentation Wednesday night.

Beginning Monday, 207 Pros and their AAA partners will head out onto the waters of Lake Mead Monday to contest the 34nd Anniversary of the WON Bass Bas Cat Boats / Mercury Marine U.S. Open.