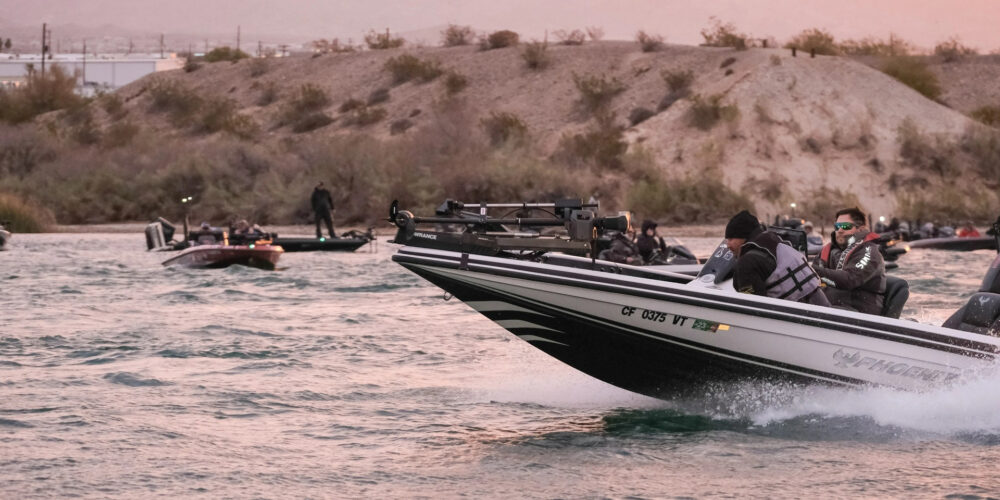 The Toyota Series offers the biggest payouts for the lowest entry fees of any national tournament trail. The Toyota Series is the only Western trail that offers advancement to the no-entry-fee Toyota Series Championship, where pros fish for $235,000, including a $35,000 Phoenix MLF Bonus, and co-anglers compete for a $33,500 Phoenix 518 Pro bass boat powered by a 115 HP Mercury.

“I’m finally around home for a Toyota Series event, and I’m really excited to compete in this one,” said Bass Pro Tour pro Roy Hawk of Lake Havasu City, Arizona, who has 22 Top-10 finishes and three career wins in MLF competition. “Overall, the lake is setting up pretty good. We’ve had some pretty cool weather, so it’ll be typical wintertime patterns – no major move toward the spawn or anything like that, yet.

“The lake level is high, which is rare for winter,” Hawk said. “It’ll spread guys out – some guys will get way up the river, or further back into the backwaters. I think a lot of guys will be offshore, though. The key to doing well is either going to be finding a major group of fish and sticking with them, or covering a lot of water and picking fish off – one here, one there.”

Hawk said that he expects umbrella rigs, deep- and mid-diving crankbaits and general offshore tactics to be the main players, but he said the bladed jigs and squarebill crankbaits could play a role as well. For anglers targeting smallmouth, Hawk said Ned rigs and jerkbaits would be popular selections.

“I think the guy who wins might not even catch a smallmouth, but it’s generally a mixed bag,” Hawk said. “I think it’ll take 17½ pounds a day, average. My prediction is the winner is going to have right around 52 to 53 pound over three days.”

Anglers will take off each day at 7:30 a.m. MT from Windsor Beach at Lake Havasu State Park in Lake Havasu City. Weigh-ins will also be held at the Ski Beach at the Venetian Gardens and will begin at 3 p.m. Fans are welcome to attend and encouraged to follow the event online through the “MLF Live” weigh-in broadcasts and daily coverage at MajorLeagueFishing.com.

The 2023 Toyota Series Presented by Phoenix Boats consists of six divisions – Central, Northern, Plains, Southern, Southwestern and the Western Division Presented by Tackle Warehouse – each holding three regular-season events, along with the International and Wild Card divisions. Anglers who fish in any of the six divisions or the Wild Card division and finish in the top 25 will qualify for the no-entry-fee Toyota Series Championship for a shot at winning up to $235,000 and a qualification to REDCREST V. The winning Strike King co-angler at the championship earns a new Phoenix 518 Pro bass boat with a 115-horsepower Mercury outboard. The 2023 Toyota Series Championship will be held Nov. 2-4 on Table Rock Lake in Branson, Missouri, and is hosted by ExploreBranson.com.