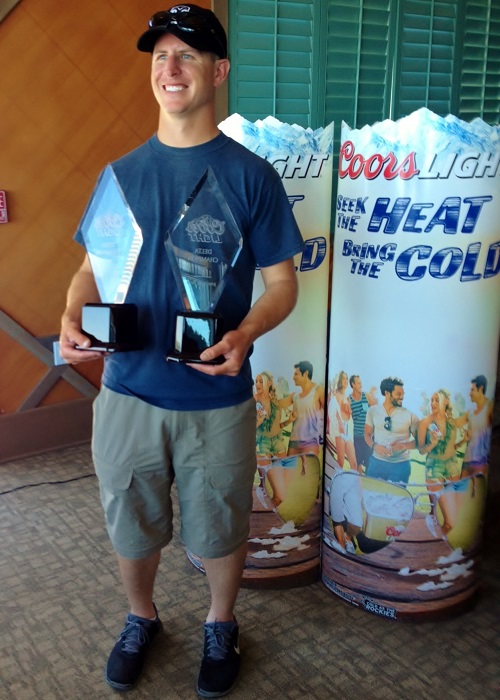 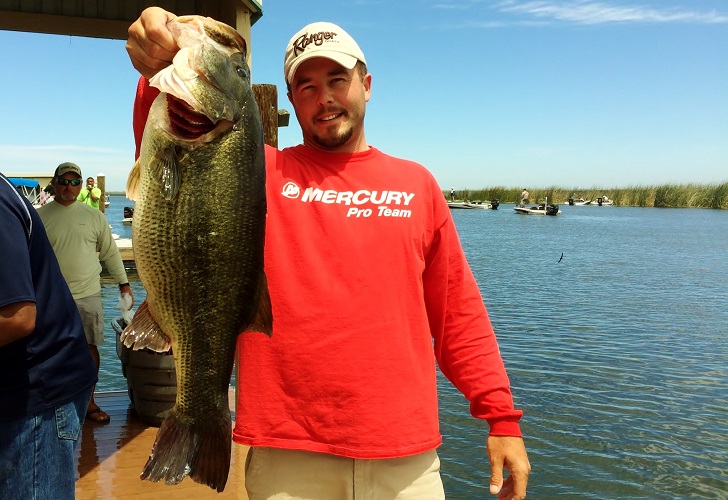 Fishing solo in a team tournament could be considered a disadvantage; but it didn't impede Joel Lesier of Oakley, Calif. who single-handedly claimed the championship at the debut of the Coors Light Delta Open Teams Invitational with a tournament total of 43.52.

Lesier qualified for the Invitational with his father Pat through the 2013 Snag Proof Open and while circumstances kept the elder Lesier off the water this past weekend.

Joel sat just outside the top-5 at the close of day one with 18.52, more than 7 lbs back from the leader, but that did not shake his confidence. "I felt I was around the winning fish," he stated.

A combination of all three allowable lure company's products were used. The majority of his fish were caught flippin' and punchin' in 5 to 8 ft of water. Lesier was using a River2Sea Trash Bomb with a green pumpkin Yamamoto Psycho Dad and Flappin' Hog. "I used three different sizes of weights 3/8, 1 and 1 1/2 oz," said Lesier. "It just depended on the vegetation that I was around. I caught some fish on the lighter stuff and some on the heavier stuff."

The event was won in the final 30 minutes on the last day, when Lesier walked a Snag Proof Ish's Phat Frog in open water and reeled up a 6.79. "He came up and smashed it," he recalled. "I had about 19 lbs at the time. I felt pretty confident when I got this one in."

He ended the day with 25 even.

Lesier fished areas in the west and mid Delta. He got 10 fish on day one and eight on day two. "I lost a couple of big fish the first day and I knew if I could calm down, stay patient and fish thorough, I could have a good limit," said Lesier. "At 8 a.m. I didn't have a fish in the boat; but then when the tide started coming in, that is when my bites started to happen."

Joel has fished his entire life on the California Delta. He has competed with his father in the tournament scene for the last six years. Joel reported they won a boat a few years ago in a Tournament of Champions on Clear Lake. Since Joel went stag to claim this victory, he thinks he will be keeping the grand prize - a new Jeep Patriot - for himself.

Jerred Jennings joined the ranks of the top-2 on day one and held tight until the final day. He and partner Alan DeSilva took the runner-up position with 42 lbs even. Just like Lesier, Jennings fished sans partner the first day, when he landed the big fish of the Invitational - a 10.35 which bolstered his solo bag to 21.65.

Fishing the central Delta, Jennings targeted hydrilla in about 6 ft of water and punched his big one. He was using an 1 1/2 oz River2Sea Trash Bomb, a Yamamoto Flappin' Hog in green pumpkin with black flake with a Honey Badger skirt. "When it bit, I only had 10 more minutes of fishing before I had to run in," he stated. "The better fish were eating it on the lift, after the weight hit the bottom. That's when this one knocked it."

The remainder of  his fish came on a black Snag Proof frog that he fished in 4 to 8 ft of water. "The fish ate it on the pause," said Jennings. "Some of the fish came from the bank, some out in the middle in open water. They're all just doing different things right now. Some are in their summer pattern, some are post spawn and a very low percentage are still spawning."

DeSilva hopped on board for the second half of the event and the duo repeated the same pattern. Again, four of the weigh fish hit the frog and their biggest an 8.22 ate the Flappin' Hog right the end of the day. "The window for bigger bites was limited," said Jennings. "At 11:30, we only had 12 lbs, then in the last hour, we recycled every one of those fish and I hooked the eight in the last 15 minutes. Our weigh-in on day two was 45 minutes later than on day one; so that worked out good with the way the tide was."

He boated about two dish dozen fish the first day and the team got another 20 on the second day.

Jennings and DeSilva qualified for the Invitational through the 2013 Yamamoto Open. For second place and the Big Fish option they earned $1,800 at the event.

Last year's River2Sea Open champions Ken Mah and Jason Austin rounded out the top-3 in the final standings, after leading on day one with 25.75. A dip in their weight on day two put them at 41.55.

"The first day, the most damage that was done was on a River2Sea Rover," said Mah. "Jason found the topwater pattern in practice and had narrowed it down to a unique retrieve that the big fish wanted."

They got nine fish on the Rover and three others with a River2Sea wake bait. "It was a slow deal," said Mah. "At about 10 a.m., we were probably sittin on 14 or 15 lbs and then it just happened. Because of the tide, there were very small windows and you'd better be where you were supposed to be when that hit.  We had a 6.50 and an 8.85 in the boat within about seven minutes."

The topwater pattern didn't hold out for day two. By 9 a.m., the team knew they needed to make an adjustment. The team's backup pattern entailed a flippin' rig with a green pumpkin and red flake Yamamoto Flappin' Hog and an 1 1/2 oz River2Sea Trash Bomb. "After I got serious with the flippin' stick, I got our first three for the day," said Mah. "I was fishing a little bit deeper than I like to fish, because I noticed that they had buried down in the grass much further than they were the day before, probably because of the post frontal conditions."

After the event, Austin expressed his congratulations to Lesier saying, "His win was very impressive and he should be proud of himself."

All of the top trio were excited to have the opportunity to fish for an entry into next year's Coors Light Invitational by participating in one or all of the 2014 Yamamoto Big Bass Challenge, Snag Proof Open or River2Sea Open.

"I wouldn't miss it," said Mah. "Where else can you fish one event for a very small entry fee, cash a check in that event and qualify for an entry to win a $15,000 truck. All of these companies make great products, I don't feel at a disadvantage when we're restricted to fishing these product lines."

Mah expressed his appreciation to River2Sea for having the trailer available at the event.