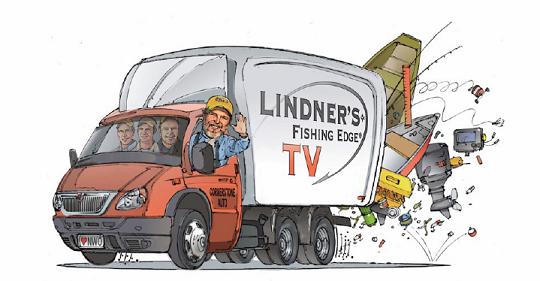 LINDNER’S FISHING EDGE TV IS NEWLY REVAMPED AND MOVING TO THE OUTDOOR CHANNEL!

Brainerd, MN – December 12, 2012 — Beginning the first weekend of January 2013, Aland Ron Lindner, two of the most respected freshwater outdoor educators in the sportfishing world, will log their 43rd consecutive year on Television.

The year 2013, however, welcomes a change of pace. With an experienced eye on the future, the Lindners—Al, Ron, James and Daniel — are charting a new course through the rapidly shifting tides of the electronic media world.

James Lindner, Executive Director of Lindner Media, said, “Our new strategic programming format is a direct reflection of the changing platforms in the sportfishing and television industry. We are using these shifts to our advantage by tailoring our programming content to appeal to different audiences, while still delivering our award-winning educational, entertaining and inspirational shows.”

Daniel Lindner, Executive Producer, noted, “One of the new additions we are excited about is Lindner’s Fishing Edge’s behind-the-scenes focus. This long-format program concentrates on a single species, is reality-based and very personality driven, and includes segments with our large crew of nationally recognized Hall of Fame experts. It delves into, unwraps and explores what makes some of the best fishing minds in the sport tick.”

It has been said, “The only constant is change.” However, the Lindners have remained true to their founding mission statement set forth over four decades ago — which is to produce cutting-edge programming that is designed to educate, inspire and entertain viewers on how to catch more and bigger fish.

Lindner’s Fishing Edge will air exclusively on The Outdoor Channel Fridays at 8:00 am ET, Saturdays at 3:30 pm ET, and Sundays at 9 am ET.

For more information on dates, times, and stations visit www.lindnermedia.com.