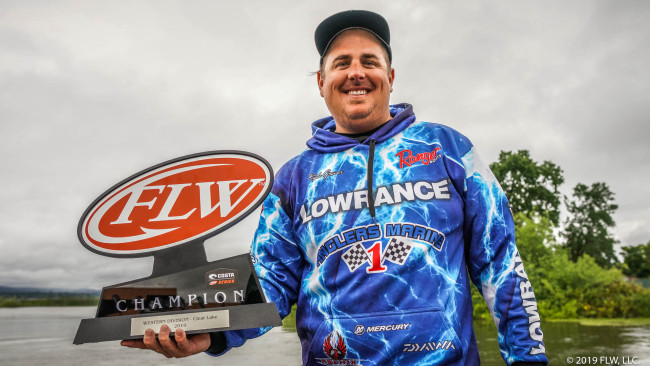 LAKEPORT, Calif. – Pro Kyle Grover of Rancho Santa Margarita, California, caught a five-bass limit weighing 26 pounds, 2 ounces, Saturday – the heaviest limit weighed in the three-day tournament – to win the Costa FLW Series on Clear Lake presented by Ranger Boats. Grover’s three-day total of 15 bass weighing 66 pounds, 13 ounces, was enough to earn him the victory by an 8-pound, 13-ounce margin and the top prize of $80,303, including a new Ranger Z518L boat with a 200-horsepower Evinrude or Mercury outboard.

Grover said he started out the tournament Thursday flipping tules with jigs and wacky-rigged, green-pumpkin-colored Yamamoto Custom Baits Senkos. Friday he started at an area he’d fished only a couple of times on Thursday, and caught a 7-pounder within the first few casts.

“I didn’t realize the area’s potential, but when I caught the 7-pounder on my second cast that made me hunker down,” said Grover, who earned his first win in FLW competition. “I ended up staying there all Saturday today, too. I think on my second cast I caught a 6-pounder and then a 3¾ right after that.

“I was catching them on jigs the past two days,” continued Grover. “The area we were fishing had so many in there. I caught 40 yesterday, and probably 30 today. You’d just rattle off 2½- to 3¾-pounders, and then you’d catch a big one.”

“It’s a popular community hole, but I think the weather made it difficult to fish,” said Grover. “I stuck it out though, and had a special day out there today.”

Grover said he primarily used a 3/8-ounce, brown with green-pumpkin-colored Phenix football jig with a 3-inch, green-pumpkin Berkley PowerBait Chigger Craw, as well as a ½-ounce version of the jig with a Falcon Lake Craw-colored Strike King Rage Bug. He also had some key bites on a Chili Bowl-colored Norman DD22 crankbait.

A complete list of results will be posted at FLWFishing.com.

Uribe and Olson both weighed in 8-pound, 11-ounce bass on Thursday – the heaviest fish of the tournament in the Pro Division. The each shared the day’s Boater Big Bass award of $230.

Logan Huntze of Discovery Bay, California, won the Co-angler Division with a three-day total catch of 15 bass weighing 57 pounds, 15 ounces. For his win, Huntze took home a $27,000 prize package, including a Ranger Z175 with a 115-horsepower outboard motor.

Wallar caught the biggest bass of the tournament in the Co-angler Division Friday, a fish weighing 7 pounds even. Wallar earned the day’s Co-angler Big Bass award of $152.