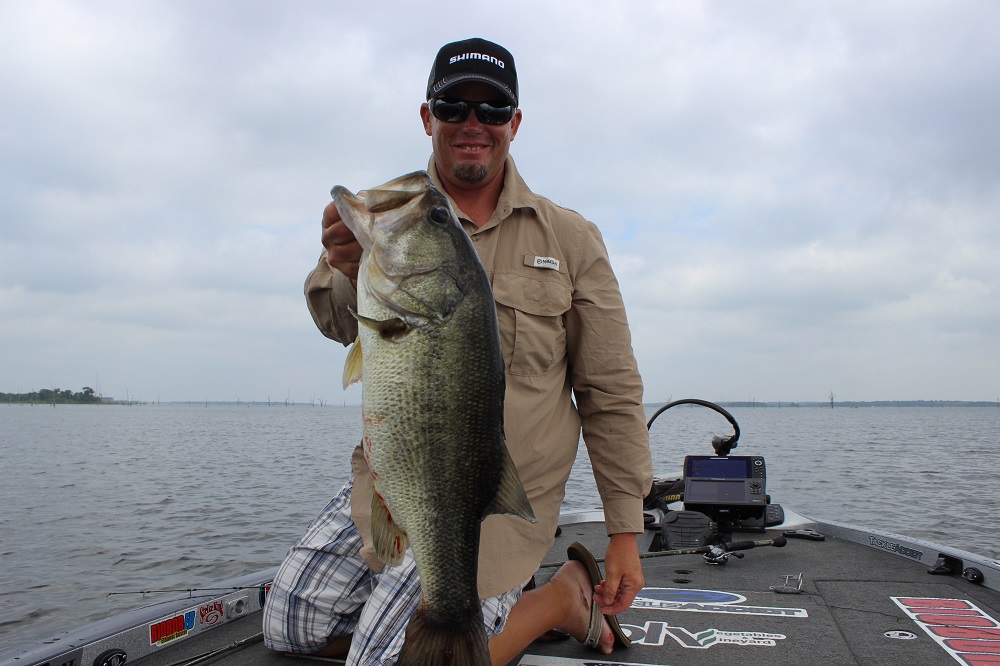 Over the past few years, deep crankbaits have been getting bigger and diving deeper than ever before. The magnum baits have proven to appeal to big bass, and one of the best in the world at using them for lunker bass is Bassmaster Elite Series pro Keith Combs. 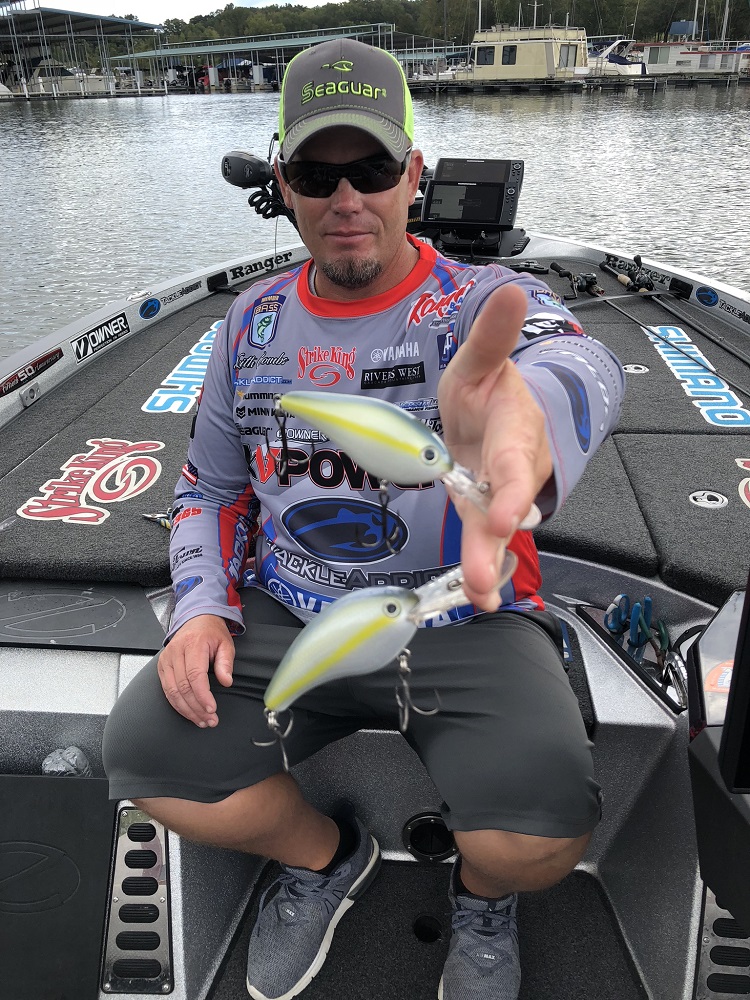 The Texas angler has cranked his way to several high-profile wins and shares some light on the different baits he uses and the situations where they excel.

When fishing bodies of water with excessive fishing pressure, many anglers reach for a spinning rod and go with a finesse approach. Combs, on the other hand, often go to the extreme opposite.

“A lot of times, the first thing that comes to a fisherman’s mind is to grab a dropshot or something, but more times than not it is about showing them something different. If everyone else is fishing the same styles of baits, something like a Strike King 10XD will grab the attention of a fish,” says Combs.

He referenced a trip to Lake Fork, Texas after a nearly 1,100-boat field had fished the lake for a week. The best lure choice while fishing after that mayhem was a 10XD.

When fishing around submerged brush piles, the buoyancy of a crankbait can be the difference between losing several baits or having the trip of a lifetime. One of the best baits Combs has found for this situation is the Strike King 8XD.

“Because it is so buoyant, it is great for cranking around brush. You can see this when you stop reeling, and see how quickly it comes to the surface,” he says. “That is a big plus when you are fishing around brush.”

Combs also appreciates this bait because of how far it can cast and the fact that he can use bigger treble hooks compared to smaller baits.

“The 8XD filled a good void for me even though it doesn’t run much deeper than the 6XD. It is an 18- to 20-foot diver, but since it is heavier you can cast it much further,” he says. “Since it is a bulkier bait you can use a bigger treble. I upsize from a #2 to a #1 treble, and that definitely helps you land more fish.”

Just because a lure will dive to ultra-deep depths doesn’t mean that is the only place to use them.

“On a pretty standard cast with 15-pound line, I can easily crank it 25- to 28-feet deep, and the good thing is it stays at that depth for a long time. But, it shouldn’t only be categorized as an ultra-deep diver,” begins Combs.

The bait has a huge profile, and Combs feels that this appeals to big fish, no matter how deep they are.

“Besides just the size, it has one of the most aggressive actions of all the crankbaits on the market and is great when you are around big fish and it is hitting hard into the bottom. I have always felt that that aggressive action is one of the best ways to trigger a big bass,” says the Texas pro.

Fishing a bait like this in shallow water only maximizes the hard drive into the bottom and creates plenty of deflections which in turn appeal to larger bass.

“I always leave one tied on whether I am fishing 10-feet or 25-feet deep,” adds Combs.

Not only are diving crankbaits getting bigger and bigger, but so are square bills. This style of bait is known for shallow cranking, but the Strike King 4.0 and 8.0 will dive much deeper. (See 4.0 in below video with Cody Meyer)

“You can get the 8.0 down to around 12-feet deep and the 4.0 will hit the six to nine-feet range,” shares Combs. This diving depth opens up a whole new world for shallow cranking.

The 4.0 is one of Combs’ favorite square bills because it has a very similar action to the smaller 1.5 and 2.5, but in a more prominent profile.

“Just about everyone has a few 1.5 and 2.5s in their box and the fish see them all of the time. The 4.0 filled another void for me, and it goes through cover extremely well,” he says.

Combs uses the 4.0 in many situations but says it shines in cold weather.

“It has been a good producer for me in the winter because I can finesse it through the grass in places where you would throw a lipless crankbait,” shares Combs. “It is also really buoyant so you can feel when it gets bogged down and make a quick snap of the rod to free the grass. That is where you are going to get a lot of your bites.” 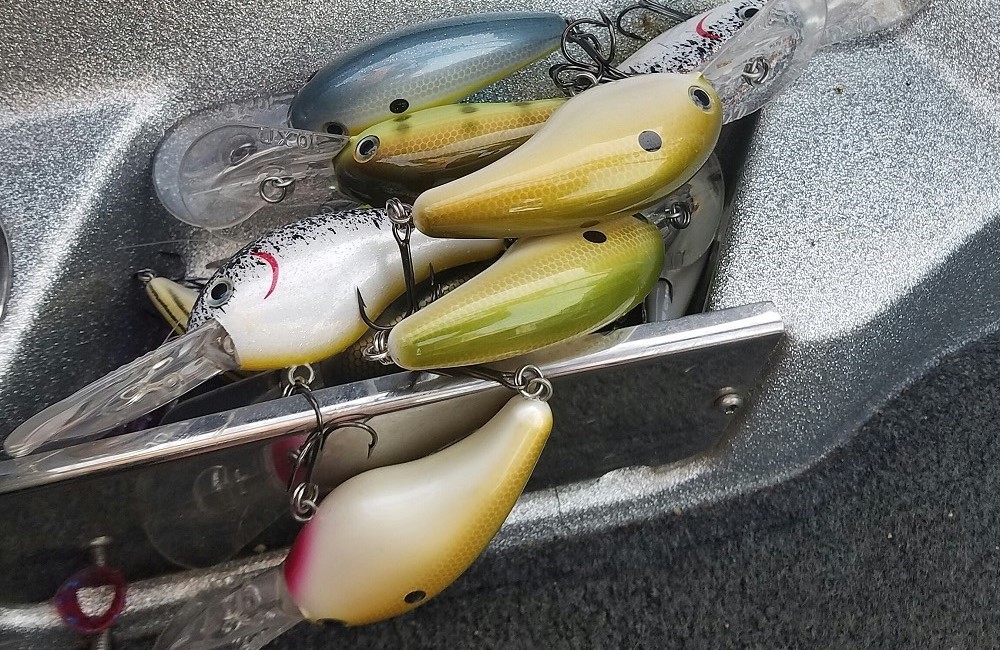 For these magnum baits, heavier gear is required, and for the most part, Combs primarily uses the same setup for all of these big cranks.

“I use a 7’ medium Shimano Curado cranking rod (CDCC70M) and 6.2:1 Curado K reel. I use 15-pound Seaguar InvizX across the board for these baits,” he says.

One of the foremost experts on cranking, Keith Combs uses them everywhere he goes. Beyond just deep structure, deep diving crankbaits will produce for you under a variety of circumstances.