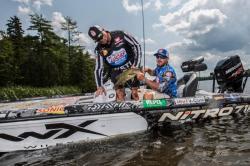 "We saw a tremendous opportunity to support bass fishing through the Major League Fishing circuit and TV show with the addition of our new Elements pattern," said Ben Maki, Senior Vice President and Chief Marketing Officer for Mossy Oak. "We're excited to outfit these professional anglers and sponsor fishing on the professional level, which gets millions of eyeballs on the Outdoor Channel, Discovery and digitally through MyOutdoorTV."

"Major League Fishing is proud to partner with Mossy Oak as they bring their brand into the fishing world," said Jim Wilburn, General Manager of Major League Fishing. "As the
No. 1 show on Outdoor Channel, it's an exciting opportunity to put the Mossy Oak Elements pattern in millions of households and combine two industry-leading brands."

About Major League Fishing
Developed through a joint effort between Outdoor Channel and two dozen premier bass fishing anglers in 2011, Major League Fishing brings the high-intensity sport of competitive bass fishing into America's living rooms in the form of riveting two-hour TV episodes. Twenty-four world-class anglers are filmed over the course of a six-day event. The show captures their efforts as they utilize a demanding format that allows them to weigh all the "scorable bass" they catch. Unlike other competitive fishing events, live leaderboards in the boats allow anglers to know their standings at all times. For more information about the game, visit www.majorleaguefishing.com and follow Major League Fishing on Twitter, Instagram and on Facebook.