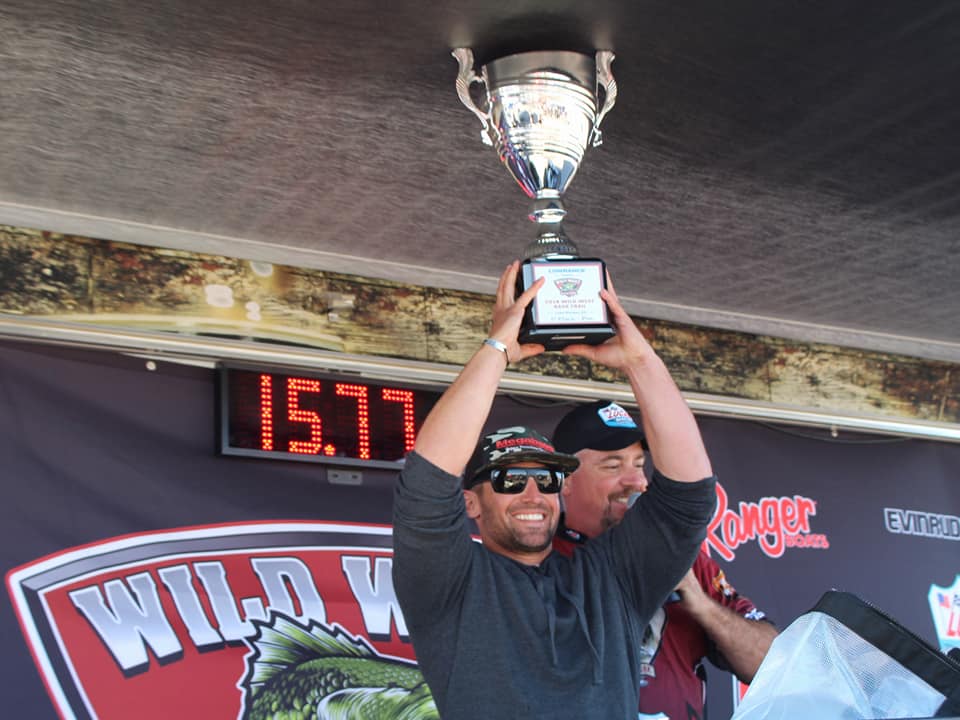 LAKE HAVASU CITY, Ariz. – Fish management was the key strategy for Mike Caruso of Peoria, Ariz. at the 2018 Wild West Bass Trail (WWBT) Pro/Am at Lake Havasu presented by Lowrance this past weekend.

Caruso bested the 65-boat field by sight fishing a majority of his weigh fish at the desert lake fishery.

“The ones that I found in practice were ready to go as soon as I ran to 'em on the first day and I caught 'em right away,” began Caruso as he discussed the three-day competition.

“I was fortunate enough to catch my first day’s fish really early. By 8 a.m., I already had close to 20-pounds; so, I was able to use the rest of that day as another practice day and went looking for new fish."

A productive Day One landed Caruso in 2nd place with 22.97, anchored by a 5.46 kicker. All but one of his fish came from beds. By scales close, he sat just over two-pounds behind the leader, Sunny Hawk.

“Saturday, I caught my 2nd biggest fish and it was a one-flip fish,” he said. “I had seen the female in practice. She had shown herself once; so, I ran there on a whim. I had caught the male on Friday and yesterday, she was ready to go with that one flip.”

All of Caruso’s Day Two fish came from beds. He weighed a five-fish limit that went 19.53 and boosted him into first place. His two-day total of 42.50, came with a slight lead of .21 over Hawk.

“Today (Day Three), I caught only two off 'em of beds and the rest just fishing,” Caruso said. “My big fish was one that I found and had fished for yesterday. I just seemed to manage my fish well, make the right calls and know when to go looking.”

Caruso reported fishing all over the lake from the “main bowl area” around Windsor down past Sandpoint Marina. He credited the confidence he had in his boat to be able to make the journey.

“I was running around, looking for areas that I didn’t think other people would hit and those are the fish that I found,” he said. “I would think of places (coves) that I never have seen anyone in and I would go in there and see a fish.

"I could tell it was a fresh fish; because it would immediately be ready.  But in areas where there were others fishing, as soon as the bass would see your boat, they would swim off. Or, they would stay on the bed until you pitched to ‘em and then they’d swim off. So, I could tell a big difference in the fish that were pressured or not and that is what I keyed on.”

Three different baits put Caruso’s weigh fish in the box. For his bed bait, he opted for a tube by Canyon Plastics.

“It was nothing special – just a little white tube,” he added.  “I used a dropshot for the rest of the fish.”

He rigged his dropshot with a ¼-ounce weight and revealed that the plastics he used were a 4 ½-inch straight Roboworm in Margarita Mutilator and a 5-inch, green pumpkin and watermelon Yamamoto Senko.

“On the first day, every time that I saw a big largemouth that wasn’t on a bed, it would be off a brush pile; so that got me really focused on brush piles, if I was fishing for largemouth and then fishing pre-spawn areas, if I was fishing for smallmouth,” he explained. “I was trying to catch the ones that were coming in to spawn or the ones that had spawned and were on their way out.”

Caruso locked in the win on Day 3 with a tournament-total of 58.27. His Havasu trophy came with cash winnings of $7,750 and included contingency dollars from Lowrance, Yamamoto and P-Line. Caruso plans to use the Havasu payday for his wedding and to reinvest into new Lowrance electronics.

The following contingency payouts for pros were also awarded:

A tournament total of 40.23 gave Dustin Remy of Lake Havasu City, Ariz. the co-angler win.  For his win, Remy will ride home with $3,250, including Yamamoto.