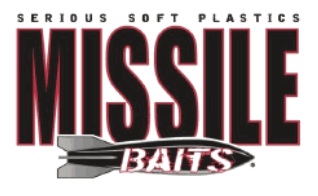 Crews said he is proud to bring his baits to the public and that Dick's Sporting Goods is a tremendous retailer to allow more anglers be able to find Missile Baits.  "We work really hard to be able to bring great fishing lures to anglers all over the world," said Crews.  "We've built a wonderful relationship with many independent retailers to make our baits available.  To have a company such as Dick's Sporting Goods bring Missile Baits into their stores will definitely allow many more anglers access to fish better soft plastic baits. I'm looking forward to this relationship."

Dick's Sporting Goods will be carrying the D-Bomb, Missile Craw, and the Tomahawk 8.75.  The D-Bomb is a 4.5-inch soft plastic creature bait that Missile Baits pro staffer Ish Monroe used to win the 2012 Bassmaster Elite Series Power Pole Slam on Lake Okeechobee in March.  The Missile Craw is a versatile 4-inch crawfish shaped lure that can be used for flipping, punching, and more. The 8.75-inch Tomahawk is a unique worm with twin ribbon tails that is perfect for fishing ledges and Texas rigging.  Each lure model will be available at Dick's Sporting Goods in six colors.

MISSILE BAITS is a small company dedicated to creating SERIOUS soft plastic baits to help anglers catch more fish. The designs are straight off the top-level professional bass tour. Based in Salem, Virginia, MISSILE BAITS works relentlessly to make the best baits, show their customers how to use them, and stay on the cutting edge of bass fishing. New products and videos will continue to blast offinto 2012 and beyond. Log ontowww.MISSILEBAITS.com for videos, tips, forums, and more.