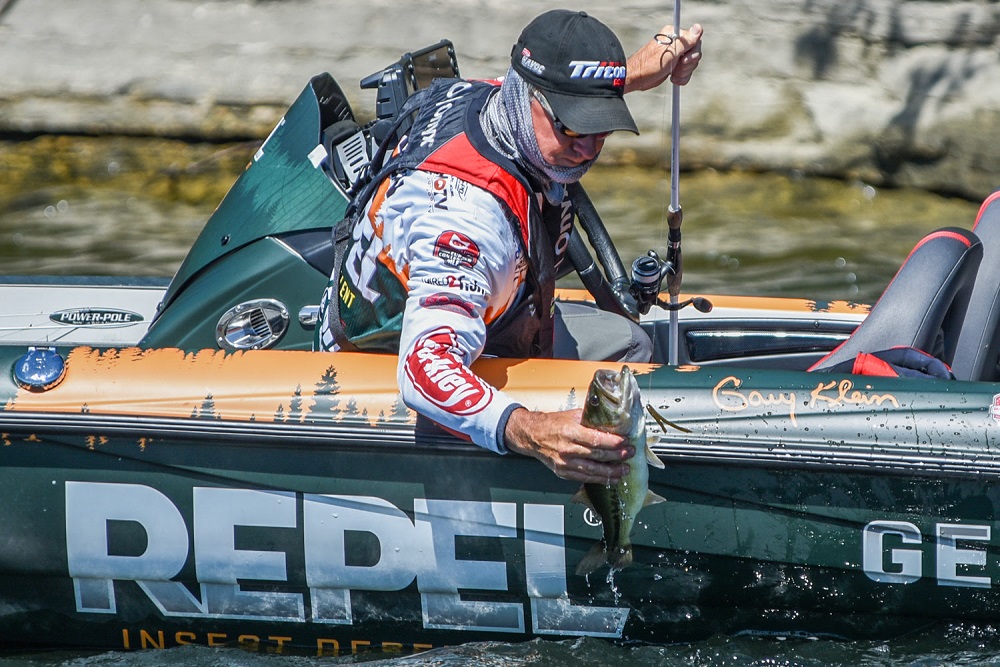 Records Continue to Fall During Elimination Round at Bass Pro Tour
Berkley Stage Six Presented by TrueTimber
BRANSON, Mo.,  - Three days into competition at the Major League Fishing® (MLF) Bass Pro Tour Berkley Stage Six presented by TrueTimber, we're starting to run out of superlatives to describe the bite at Table Rock Lake. Choose your favorite - "stellar" and "outstanding" fit - but "record breaking" is still the most accurate.
Cliff Pace became the most recent record breaker, putting 38 fish on SCORETRACKER® for 60 pounds, 1 ounce on the day, giving the Mississippi pro a two-day total of 134-13 and obliterating the existing Elimination Round record of 105-6 held by Zack Birge. Pace's two-day fish total of 89 is another record. The field combined to catch 407 fish in the first period, and weighed 684-9 (both records).
And while all of the above numbers are impressive, the fact that 15 of the 20 anglers advancing out of the round surpassed the 100-pound mark tells the story of just how prolific this impoundment of the White River has been.
"Of all the years I've been around fishing, I don't know if I've ever seen anything like this as far as sheer volume of fish," said MLF NOW! analyst Marty Stone. "I knew when we came here that this lake was in good shape, but I've never seen a like that's so good from one end to the next. We're looking at where guys are catching fish, and we're seeing anglers who are literally 50 miles apart catching them. It's harder right now to find a place where there's not a fish than a place there is."
Pace was followed by Gary Klein (130-2), Birge (129-11), Greg Vinson (125-12), Aaron Martens (121-15) and Jacob Powroznik (116-15). Jesse Wiggins, Michael Neal, Mark Rose, Fletcher Shryock, Russ Lane, Jeff Sprague, Anthony Gagliardi, Casey Ashley, Dave Lefebre, Andy Montgomery, Fred Roumbanis, Brent Chapman, Randy Howell and Randall Tharp qualified for Tuesday's Knockout Round.
Tharp Escapes Elimination
As has become the daily storyline during Elimination Round competition, the race around the Elimination Line came down to a difference of a single fish. Trailing Jason Christie by 7 ounces entering the final 10 minutes of official competition time, Randall Tharp caught two fish for 2-13 in the final seven minutes, finishing with 94-12 and moving past Jason Christie into 20th.
"It was extremely intense," Tharp admitted. "I struggled at times in the second period - dropped all the way to 25th or 26th - so to get on something that late and catch one with 5 to go to get to 20th, and then hook one with 15 seconds left ... it was a stressful afternoon for me. I'm glad it worked out the way it did."
"It's crazy that you can catch 92 pounds and not make it," said Christie, who finished with 92-6 on 48 fish.
Elimination Round 2 Set for Monday
The Bass Pro Tour will see its first Monday action of the season when Group B returns to Table Rock tomorrow for the second Elimination Round of the event. Viewers tuning in on the MLF NOW! live stream will likely see 5 ½ hours of fish catches: 16 Group B anglers put 50-plus pounds on SCORETRACKER in their Shotgun Round on Saturday, led by Josh Bertrand's 89-5. The biggest X-factor, though, is the water level, which sits at 917.54 as of this writing (just over 1 foot lower than when practice began on May 16).
"This lake was way up when we got here, but water has been dropping: instead of there being a fish on every bush, there's a fish on every 10th bush," Stone said. "These anglers are having to cover more water to get the number of bites they need. As the week goes on, the 45-degree banks will become more relevant, and the guys fishing offshore will become more relevant. But the challenge for these Group B guys on Monday is that whatever they found in the first day of practice is five days old now - they might as well just go ahead and start practicing again. Group B has a big challenge in front of them."
Today's Round By The Numbers
The 40 pros caught 1,023 fish in Elimination Round 1, the third day in a row with over 1,000 fish making it into SCORETRACKER.
Daily Winners
Elimination Round 1 daily awards were:
*    The Berkley Big Bass of the day was a 5-9 largemouth caught by Mark Rose
*    Andy Montgomery was the Berkley Catch Count winner with 42 fish
*    Birge earned the Phoenix Boats Daily Leader award with 69-14
When, Where & How to Watch
Elimination Round 2 competition begins at 6:30 a.m. CT, with live, official scoring available from "lines in" via SCORETRACKER on MajorLeagueFishing.com and on the MLF app. The MLF NOW! live stream starts at 9 a.m. CT, with live, on-the-water coverage and analysis provided by Chad McKee, JT Kenney, Marty Stone and Natalie Dillon until lines out at 2:30 p.m. The Berkley Postgame Show - hosted by Steven "Lurch" Scott - will start at 4 p.m. daily.
Elimination Round 1 Final Results
To see Elimination Round 1 final results for all Group A anglers, visit MajorLeagueFishing.com and click " results."