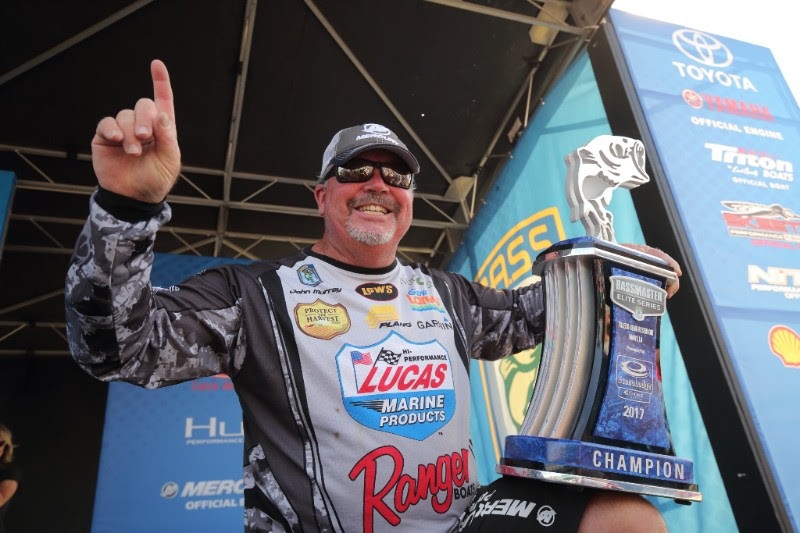 John Murray of Spring City, Tenn., wins the 2017 Bassmaster Elite at Toledo Bend presented by Econo Lodge held out of Many, La., on Sunday, with a four-day total weight of 77 pounds, 10 ounces.

MANY, La. — After spending 11 seasons on the Bassmaster Elite Series without a victory, John Murray was starting to think his window of opportunity might have already closed.

The West Coast native was in 34th place after Friday’s second round and in danger of missing the final cut. But he made an enormous recovery with 23 pounds, 7 ounces Saturday and then slammed the door with 24-15 Sunday to win the Bassmaster Elite at Toledo Bend presented by Econo Lodge.

“I’ve been on the Elite Series since its inception (in 2006),” said Murray, who earned $100,000 for the victory. “All that time I’ve been trying to win one, and I always thought I would. But as the years went by and the competition kept getting better and better, I was starting to think maybe it wasn’t going to happen.

“To finally really do it … It just feels like a dream.”

He had one spot on the south end of the lake where he knew there were some big fish — and he found those fish. But when he wasn’t able to put them in the boat, he decided to rely more on a spot back near the launch site at Cypress Bend Park that’s been good to him through the years.

“I lost a couple of big ones the first two days that cost me a lot,” said Murray, who had two wins with B.A.S.S. before the creation of the Elite Series, including a 2003 Open Championship on Toledo Bend. “The third day, I just finally decided I wasn’t going south.

“I decided I was going to stay up here. I know they’re big up here.”

Murray’s comeback really took off Saturday in a spot he said was only 200 yards from where he won the Open Championship in 2003.

He used large jerkbaits and a crankbait to target big largemouth bass that were feeding on small white bass along a ridge. He said the spot had about 4 or 5 feet of water on top and some type of old housing foundation that was holding fish.

“Throwing a shad-sized bait worked earlier in the day. But once the sun got up, you needed something bigger. So, I went to the bigger sized jerkbait.”

Murray’s lures of choice were two 30-year-old Smithwick Rogues, a Strike King 5XD crankbait and a Lucky Craft 128 Pointer jerkbait that was given to him by his friend and fellow Elite Series angler, Skeet Reese.

On Sunday, it was the crankbait that worked best.

“I didn’t even have the 5XD crankbait out of my rod box,” Murray said. “I just saw the conditions and picked it out. It was sort of neat that they just switched.

“I think maybe the wind all night kind of brought them out a little deeper.”

Murray had two giants in his bag Sunday that weighed 7-9 and 7-7. He thought for a while the larger of the two might be a catfish until he finally got a look at it.

“It never jumped,” he said. “It just fought so hard and pulled my rod straight down. There’s big stumps here, and you can’t just let them go down or you’ll never get them out. I knew I had to pull hard.

“Once it came up and jumped, I knew it really was a bass.”

Oklahoma angler Jason Christie finished second with 72-11 and earned $2,500 dollars as the winner of the Phoenix Boats Big Bass award. He had the largest fish of the tournament with a 9-12 on Day 1.

The amazing comeback by Murray overshadowed a great week by Elite Series rookie Jamie Hartman. After leading the event on Days 2 and 3, Hartman caught another solid bag of 15-8 on Day 4. But that left him in third place with a total of 72-7.

“With all of the stars that have won tournaments here, for me to come back and win again here is a dream come true,” Murray said. “I keep expecting my alarm to go off in a minute and wake me up.”

DeFoe was awarded $1,000 for the leading the Toyota Bassmaster Angler of the Year points race at the end of the event.

Christie also earned the Power-Pole Captain’s Cash Award of $1,000 for being the highest-placing angler who is registered and eligible and uses a client-approved product on his boat.

Christie earned $500 as the recipient of the Livingston Lures Day 2 Leader Award.

The event is hosted by Toledo Bend Lake Country.