It was a pleasure to be able to attend 2004 ICAST/LAS VEGAS. Here is the next product featured on WesternBass.Com from the show, Nemire Lures Red Ripper and New Nemire Rods.

John Nemire, founder of Nemire Lures, began baiting fish when he was as tall as his Grandfather's wading boots. As a child, Nemire spent every chance he could fly-fishing for bass from his grandfather's row boat, with the help of his 'lucky' cane pole.

"I remember spending many hours sitting on the banks fishing the Ottawa River in Toledo for bullhead, catfish and carp," Nemire recalls. "Sometimes I would ride my bike to spots on the river close to Lake Erie and would catch so many fish that my mother would have to bring the car to haul them home." 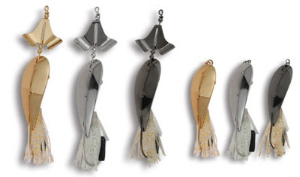 In the early 1970's, Nemire started making his own fishing lures, including the first stand-up Jig Head, Drop Spinner Bait and the original Spoon Buzzer. The popularity of his lures caught on with fellow fishermen across Ohio. Before long, Nemire found himself fishing and promoting his lures full-time. Although timing and the economy were against the business venture, he had created lures that have since proven themselves to be diamonds in the rough.

In January 1998, Nemire decided to take another crach at the lures by improving the original Spoon Buzzer, which won six consecutive tournaments in the 1970's, and to design his Red Ripper. With 20 years of experience under his belt, he set out to reshape his lures into time-tested winners that would send the fishing industry reeling.

One of Nemire's goals was to design the Red Ripper—a weedless metal crank bait with a rattle. He tested one prototype after another in his swimming pool and local ponds. The first time he tested it against other proven lures, the new Red Ripper out-fished them 3 to 1, hooking six bass in 45 minutes. The new Red Ripper was a success. And the rest is history.

Nemire Lures' All-Metal Sound Chamber against the metal spoon produces a sound that the fish have not heard before, and they are reacting to it with amazing regularity. This Sound Chamber has been proven effective in attracting fish from long distances.

The Red Ripper's dual action is one of its unique features. The lure moves through the water turning from left to right, imitating the motion of a fish. At the same time, it has a controlled wobble that rocks 180 degrees back and forth, accentuating the Sound Chamber even more.

Versatility plays a key role in the Red Ripper's arsenal for catching fish. It can be retrieved very slowly at variable depths or can be brought in with a high-speed retrieve. The Red Ripper will hold its motion and controlled wobble without spinning and turning over like many other lures. In addition, if you stop the retrieve, the Red Ripper Spoons will wobble slowly to the bottom — not tumble straight down — further imitating a baitfish.

The patented Skirt Strap offers the ability to remove the existing skirt and exchange it with another skirt, plastic worm or any other type of trailer — you can get creative here! When trying to “match the hatch” or match the size of local baitfish, slow your retrieve way down and remove the skirt or trailer to help produce strikes.

Experience shows that lure finishes are very important. We have put that experience into the Red Ripper family in order to provide you with the best lure you can find. The quality of the 24-karat gold finish and the silver finish offer extra durability combined with the ability to catch fish. In addition, gold and silver happen to be the best conductors of sound so the Sound Chamber's benefits are maximized. . New this year is our Black finish. This new color makes the lure resemble shiners, or other small baitfish, that hungry and aggressive fish attack.

The Red Ripper is a metal crankbait with a sound chamber that can be fished at any depth.

First, you can just cast it out and reel it in. Keep your rod tip pointed down at the water. No swivel is needed and you can put some speed on it and it will not spin or dart all over the place. Please remember it is also a great stop and go retrieve lure. When you stop the lure it will wobble very slowly towards the bottom and pick up its action very quickly when you start to reel it again.

Second, the Red Ripper can be fished as a jerk bait under the surface.

Third, it can be skittered across the surface and dropped next to cover or dropped in holes when you are fishing heavy cover.

Fourth, you can remove the skirt and replace it with a plastic trailer. The back 3” of a 6” curl tail plastic worm works great. Just slide the trailer over the skirt strap and then push down the strap to lock the trailer in place. The skirt strap was built into the lure just for that purpose.

Fifth, you can fish it without any skirt or trailer at all. You cannot put as much speed on your retrieve when doing this, but it is a very effective way to fish it. Especially when they are feeding on smaller baitfish.

Finally yet importantly, because of the way it enters the water and its slow fall, the lure is great for flipping and pitching.

Coming out sometime soon in tackle stores near you will be the first in a series of rods manufactured by Nemire Lures. At press time it was rumored that a Red Ripper would be attached to each rod sold by the company.

Check out more information at http://www.nemirelures.com/ .