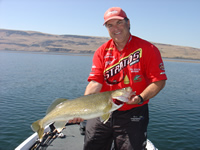 Although my scales indicated the weight of the walleye was 14.01 pounds, they list the record as weighing 13.75 pounds. This beats the previous world record of 12.00 pounds caught in 1995.

This walleye was caught in the Columbia River in the Lake Wallula section at TriCities during a Northwest Bass Tournament (Sept. 25, 2005). The fish was released alive at the same spot after weighing on certified scales upon capture, and taking measurements and photos.

It was caught using the following tackle:

The walleye was caught while vertically dropshotting the edge of the main river channel in 27 feet of water.