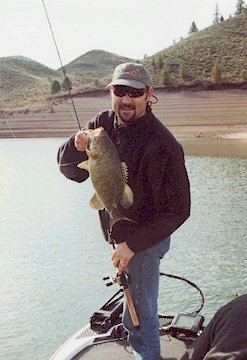 A SLIGHT wind blows across the surface of the water as small waves lap against the shore. The moonless night is dark, except from the faint light of the stars and the occasional beam from a small penlight. As the angler begins the forward cast, a coyote sounds in the distance, marking an otherwise quiet night.

Perched on the main-lake point, the angler begins his retrieve — a slow methodical crank, the rod-tip throbs with each kick of the bait. Halfway back to shore, the clack-clack of the bait abruptly halts in a thunderous explosion of water. Quickly the angler reels down, and the rod bends under immense pressure — he’s on another twilight trophy.

It’s been known for years that bass are nocturnal feeders – especially big bass. For this installment of The Hunt for Giant Bass, we talked with two dedicated trophy hunters that have made the hunt for giant bass after-hours a priority. Rob Belloni, owner and webmaster of www.calfishing.com, is an avid big bass hunter. With ten fish over 13 pounds and an 18 pound behemoth to his credit, Rob is an authority, not only on big bass, but big bass at night. Cris Vanclef, a veteran tournament angler, winner of the WON Bass Western Classic in 2003 and BASS Federation Nationals qualifier in 2002, is also an ardent night-time trophy guy with numerous fish over 10 pounds.

So what do these guys do at night in order to catch these pigs? Read on and hopefully the subsequent paragraphs will shed some daylight on their night-time ploys.

Both Vanclef and Belloni upsize their line for plying the waters at night. “The only change I make at night would be my line,” Vanclef said. “In the daytime, I generally throw 20-pound line. At night though, I upgrade to 25 pound because I’m not worried about the visibility of my line. My rods and reels are already upsized due to the size of the baits so I don’t need to go heavier with them.” Belloni upsizes his line, hooks and split rings. “I always go heavier on the line and hooks,” he said. “In the daytime, I’ll fish a 2 1/2-foot leader of 25-pound Triple Fish fluorocarbon line attached to my main line. At night though, I go with straight 25- to 30-pound Triple Fish Camoescent line because you can quite simply get away with heavier line in the dark.

“Also, I primarily fish Gamakatsu trebles on my swimbaits under daylight conditions because they are made of thinner, less visible wire. At night, I switch to Owner Stingers because they are made of heavier wire and less likely to bend out. I only use Owner Hyperwire split rings at night because they won’t bend at all. For jigs, I like Mustad Ultrapoints and for worms, I use Gamakatsu Superlines. The bottom line is I want a hook that is extremely sharp but also strong enough not to bend out.

“At night, you can easily lose track of where the fish is in relation to your rod tip,” he said. “Because of this, you can get some bad line angles on the fish and terminal tackle can fail. I’ve lost some big fish at night due to failed hooks and split-rings and I make certain to upgrade all of my terminal tackle before I head out at night.”

Both anglers rely heavily on swimbaits at night but use other baits from time to time. “My number-one night bait is a 9-inch MS Slammer,” Belloni said. “If the fish are anywhere near the surface, I believe the Slammer is my best bet. “If I think the fish are deeper, I’ll go with the Rago Generic Live Trout Hardbait,” he said. “This bait has a lot of knock to it and you can really feel its kick as it swims, which is important at night because I’m relying a lot on feel. “Other baits that make it into my night-time arsenal include 5-inch Big Hammer swimbaits in olive herring and sardine. People make a big deal out of using black lures at night, but very little of a bass’ natural food items are black. We all know that bass feed at night so it just makes more sense to me to stay with the natural green/brown colors.

“If the water is off color and I’m around rock or wood, I like a 5/8-ounce Assault King Cobra jig,” he said. “I’ll put either a Brush Hog or a Mad Man Craw on it to add bulk. I prefer the heavier jigs because most of my bites come on the bottom. The slow fall of a lighter lure at night is wasted time to me. The colors I use are again the same I would use in the day. Black or brown in dirty water and brown/watermelon or brown/purple if it’s clear.”

Vanclef adds a couple more baits to his box. “Other than swimbaits and jigs, I still like to use black spinnerbaits. I’ll use either a large single Colorado blade or large duel willow leafs both in black. But still, one of my favorite baits is a 10- to 12-inch worm. There always seems to be at least one fish that’ll eat it on a tough night.”

Belloni goes simple on the presentation at night. “Slow and steady is my program the majority of the time. I want to give the fish a chance to find the bait, chase it and eat it. When I use a bait designed to be fished on the bottom like a jig, I’ll shake and pop the bait but I won’t move it too far with each motion. A jig moved 2 or 3 feet at a time at night just makes it more difficult for the bass to track and eat it. It’s much better to move it 6-inches or less per hop.”

Vanclef feels that presentation is more important. “In my opinion, this is the biggest factor that determines success at night. A perfect cadence can make or break a night’s venture. You have to pay close attention to what the fish tell you.

“In the early months of the year, the bait isn’t that active and therefore, I want my retrieve to mimic their slower movement. I’m also more apt to make repetitive casts to one area in order to give a fish more of a chance to position itself correctly in order to eat the bait. In this case though, I don’t like to change my cadence at all. I want the fish to know the exact speed of the lure.

“A fast and methodical retrieve can be deadly in warm water conditions,” he said. “I use the word methodical a lot because at night, they need that constant sound or vibration to better target their prey.”

Bass have both an inner ear and a lateral line that helps them locate forage, not only in the dark but also in dirty water. It is these senses that bass fishermen must take advantage of in order to get bit at night.

“The noisiest lure I have in my night arsenal is a buzzbait,” Vanclef said. “It’s a great bait when there’s a light chop on the water. I also rely heavily on baits that move a lot of water too.”

Belloni can’t agree more. “I’m most interested in water displacement,” he said. “From long range, bass may be able to sense noise before water displacement. But at close range, I want a lure that displaces a lot of water so the fish can hone in on it and keep the missed strike ratio down.”

Wake baits play a large role in their night tactics. “I rely on wake baits for a lot of my night-time exploits,” Vanclef said. “The two baits that have worked the best for me are the MS Slammer and the Rago Rat made by Jerry Rago. The subtle noise they make and their actions speak volumes.”

“I fish the MS Slammer about 50-percent of the time no matter what time of year it is or what the water temperature is,” Belloni said. “It consistently gets the big bites I’m after and it throws a huge wake even at very low speeds.”

“To me, the type of water the angler plies is just as important at night as it is in the day,” Vanclef said. “I like to concentrate on areas that have good deep water access. Flats near ledges, points, typical spots where you’d look for big fish in the daytime. If I don’t know a lake all too well, I’ll generally start out at the dam. Or, if there is a lighted marina, I’ll go there. Marinas tend to attract a lot of baitfish at night due to these lights and the bait attracts the bass. Each lake is different so you pretty much have to put your time in and learn where the better fish hang.”

“There really is no difference between night and day,” Belloni said. “There’re periods when the fish want to bite and there’re times when they clam up. There seems to be no set rule. One rule I abide by is, if a lot of smaller fish begin to bite on a particular spot, I’ll usually head to a big fish area because a typical night bite comes in flurries and when the fish are biting…..well the fish are biting.”

“I have noticed that once a good bite has stopped at night, it isn’t very often it’ll pick back up,” Vanclef said. “About the only time a good bite will resume is if a front begins to pass through or the wind picks up. Meteorological changes seem to be the most influential, just like during the day.”

Neither angler feels moon phase is that important at night. “I’ve seen some lunar influence on night bites but I’m not totally convinced that full moons are any better than other phases,” Belloni said. “I’ve had some great bites on virtually all phases of the moon. One thing though, I will try to be on a good spot for a moon rise or set as I think they have an effect like a sun rise or set.”

Vanclef feels the same. “I think the big moon cycles have more of an effect on the spawn than anything else,” he said. “The fish I’ve caught at night are no bigger on one moon phase than another. The reason I think a lot of anglers relate a full moon to a hot night bite is because that’s when most anglers go out at night.”

Both anglers try to avoid using lights at night. “I try to keep extraneous light to a minimum,” Belloni said. “It takes a good thirty minutes for your eyes to become accustomed to the dark and I don’t want to lose this vision. For netting a fish, I have a small headlamp I’ll use (it directs the light away from his eyes) and to retie a lure, I use a small penlight that fits on my keychain.”

“We’re after the biggest fish in the lake,” Vanclef said. “I feel any unnatural light can spook these fish. When I do find the need for some light, I’ll use my headlamp and aim it away from the water and down onto the ground.”

It is no fallacy that night-time adventures can offer an angler the chance for that fish of a lifetime. And the proven techniques and tackle suggestions made above will put the odds in your favor. Just make sure to ply the waters safely at night while in search for giant bass.