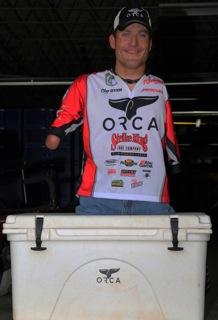 FRANKLIN, TN - September 26, 2012 - The Outdoor Recreation Company of America has become an official sponsor of Clay Dyer, "the world's most admired fisherman", to promote the company's line of American-made products, according to Jim Ford, ORCA owner.

"It isn't every day you get the opportunity to work with a person the caliber of Clay Dyer," Ford said about Dyer becoming a member ORCA's pro staff.

Dyer, a professional bass angler and motivational speaker from Hamilton, AL, was born without any lower limbs, no left arm and a partial right arm. "Clay's motto for life is, 'If I can, you can'," Ford said. "Clay expects a lot from himself and he has told us we should expect a lot from him as well. He has never allowed his disabilities to be an obstacle and we respect his philosophy on life, his capabilities as an angler and his abilities to help us grow ORCA."

Dyer will represent ORCA at fishing tournaments in which he participates, at trade shows and at his many speaking events throughout the country, according to Ford. "Clay fishes the Bassmaster Open tournaments and several charity events annually," Ford said. "He represents his sponsors extremely well and is an inspiration to everyone he meets."

"ORCA's plan is to manufacture top-quality, 100 percent American-made products and that makes me extremely proud," Dyer said. "I have spent time with the owners, the management team and the folks who work in the plant and feel so blessed to represent all of them as part of what I do everyday," he said. Dyer recently toured the manufacturing plant where the company's products are made and even had his photo taken standing on top of one of the coolers that had been field tested in the Grand Canyon for two weeks.

Outdoor Recreation Company of America (ORCA) is a highly imaginative company that manufactures products in the United States for the outdoor enthusiast utilizing American labor and American-made components. ORCA continually supports our customers for their loyalty by giving back to those organizations and groups that benefit them - Wounded Warrior programs, breast cancer programs, national conservation organizations and local community groups. One of our primary tenets is to help increase America's work force through the manufacture of our products in the United States. ORCA pledges our products will exceed our customers' expectations or we will do what it takes to ensure their satisfaction.