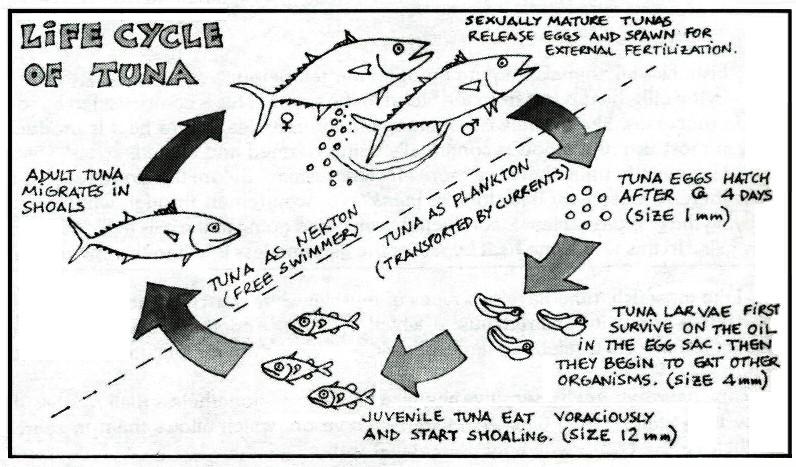 Tuna lifecycle. Part of a series of drawings made by the author for the Educational Development Center. Ministry of Education, Male', Maldives Credit: Xavier Romero-Frias
Alexandria, VA – Several regional and national recreational fishing organizations submitted official comments to NOAA Fisheries opposing listing Pacific bluefin tuna as endangered under the Endangered Species Act (ESA). The letter was in response to a petition filed earlier this year to ban all fishing, including recreational fishing, for Pacific bluefin tuna in U.S. waters.  In the letter, the American Sportfishing Association (ASA), the Coastal Conservation Association, the Coastside Fishing Club and the Congressional Sportsmen’s Foundation argue that an ESA listing is not applicable, would be ineffective management policy and would unfairly harm sportfishing and related industries on the West Coast, especially in Southern California.

The United States Government, NOAA, and the international organizations responsible for management of tuna -- Inter-American Tropical Tuna Commission (IATTC) and the Western and Central Pacific Fisheries Commission (WCPFC) -- took action several years ago to reduce fishing pressure and conserve tuna fisheries. The most recent scientific data demonstrates that these international conservation efforts have been successful in stabilizing the global population.  Stocks have begun rebuilding.

Bluefin tuna are an important species to offshore recreational fishing in California along with other types of tuna and open ocean migratory fish. The tuna sportfishing industry along the Southern California coast generates more than $100 million in annual spending.

“If this ESA listing is successful, recreational fishermen, guides and companies along the West Coast face possible negative impacts, including losses of revenue,” said Bill Shedd, President of the California Chapter of the Coastal Conservation Association.

NOAA solicited input on the ESA listing and the public comment period closed on December 12. About 700 anglers registered their concerns to NOAA through the Keep America Fishing website. A decision is likely by next summer.

“Anglers and the recreational fishing industry are conservationists who strongly support sound fisheries management efforts,” noted Gudes. “We recognize the need to sustainably manage tuna stocks for future generations, but in a manner that is fair and backed by science.”

The American Sportfishing Association (ASA) is the sportfishing industry's trade association committed to representing the interests of the sportfishing and boating industries as well as the entire sportfishing community. We give the industry and anglers a unified voice when emerging laws and policies could significantly affect sportfishing business or sportfishing itself. ASA invests in long-term ventures to ensure the industry will remain strong and prosperous, as well as safeguard and promote the enduring economic, conservation and social values of sportfishing in America. ASA also gives America's 46 million anglers a voice in policy decisions that affect their ability to sustainably fish on our nation's waterways through Keep America Fishing®, our national angler advocacy campaign. America's anglers generate more than $48 billion in retail sales with a $115 billion impact on the nation's economy creating employment for more than 828,000 people.