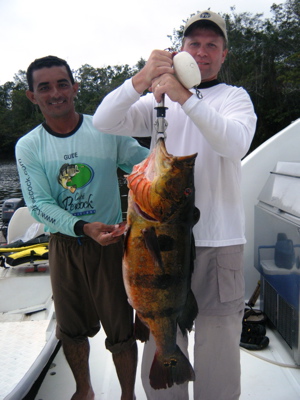 MANAUS, Brazil - The strike barely dimpled the water, but it sent waves hurtling throughout the freshwater fishing world by shattering a coveted world record that stood for 16 years.

At about 10:30 a.m. on Feb. 9, 2010, the sixth day of his first Amazon adventure, Bill Gassmann of Des Moines, Iowa, fished a clown-colored Luhr Jensen Big Game Woodchopper Slim topwater bait in a tributary of the Rio Negro in northern Brazil. The yellow, red and black spotted lure landed atop a monster speckled peacock bass, which sucked it under with hardly a ripple.

"We were fishing in a wooded area of a little backwater off a main tributary," said the 44-year-old chief executive officer of BGS Enterprises. "When the lure hit the water, it just disappeared. The fish went straight to the bottom and started spooling my line. Immediately, the guide with more than 12 years experience began jumping up and down and started yelling 'Grande! Grande!' I had no idea how big it was or that it might be a record. Then, the fish stuck its head out of the water and I realized how big it was."

In a fearsome struggle, Gassmann fought the river monster for approximately 12 minutes with his three-piece 6.9-foot G Loomis Escape model ETR81-3HC20 heavy rod attached to a Shimano Curado 300E reel. Finally bringing the beast to the boat, the Iowa bass angler grabbed its gill plates and snapped a Boga Grip on it. On the IGFA-certified Boga Grip, the fresh speckled or three-bar peacock (Cichla temensis) weighed more than 28 pounds, but Gassmann still did not realize the significance of his fish. As Gassmann handed the fish to Aldeni "Elvis" Fonseca, his guide, to release it, Elvis stopped him. Communicating in English, Elvis urged "We go boat now; we go boat now." Prepared to fish an entire day, Gassmann didn't want to head back to the Captain Peacock, a 95-foot luxury mothership yacht that accommodates anglers for such adventures. However, Elvis insisted adamantly.

When Elvis and Gassmann finally reached the yacht, Leonardo Le