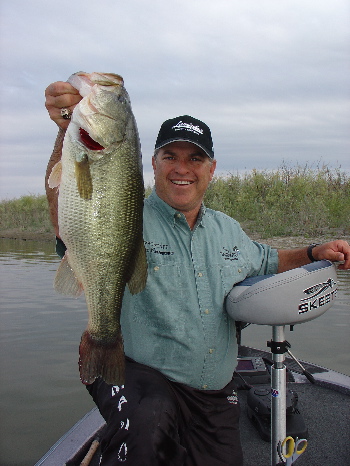 It doesn’t matter if we are talking smallmouths, largemouths, or spotted bass, one thing is certain; at any given point a bass is doing one of three things: eating, resting, or spawning. Sure, there are other activities in a bass’ life, but even those are associated with these three primary activities. This article deals with the latter of these activities, spawning.

Back in my college days I had an ecology professor that would flunk you faster than a hungry 5-pound smallmouth hits a jerkbait if you made the fatal mistake of thinking of animals in human terms. Just mention the term “baby bass” and you would wish you had played hooky instead of going to class that day. He would tell you, juvenile bass are “fry” or “fingerlings”, not babies. Why is this so important? He theorized that when we apply human attributes to wild creatures (anthropomorphism), we are doing them a grave disservice. Emotions play an integral part in our thought process, and if we apply human attributes to wildlife we make poor management decisions that adversely affect the balance of nature. In human terms, nature is a harsh and violent environment, which works just fine until we start mucking things up with emotional thinking!

So what does this have to do with bass fishing, you say? Probably in my 35 years of competitive bass fishing, nothing has been so controversial as fishing for bass during the spawning season. This is such an emotionally charged issue that many won’t even discuss it. Often we agonize over the issue of fishing for spawning bass, and it is unnecessary in most cases, and even potentially harmful.

It is no secret that most of us “love” bass fishing, and we go to great lengths to release them without harm. We all want them to grow larger and reproduce. All of us love to come home from the lake with sore arms and empty Yamamoto Senko bags from all of the action. Logic tells us that by releasing our catch, we can continue this success for years to come. By applying our “human” ideals in the world of bass, we likewise think that jerking a bass off of her nest means certain harm to the fishery. Surely it is a cruel and selfish act when we disrupt a huge, motherly bass at the peak of her vulnerability, which will mean the certain death of her young. STOP! My ecology professor just flunked us all!

Let’s detach ourselves from such emotional arguments for the sake of discussion. Nature is complex and balance depends on complex interrelationships between organisms and their environment. Everything in the wild survives at the expense of something else, and death is not wasted in nature. Nature has done a magnificent job of anticipating the death and destruction of bass’ nests. One way in which nature does this is by spreading the spawning period over a longer time period than most realize. There is always a “peak” spawn period, but often the most successful nests are those that were built by the healthiest bass prior to the peak time period. Most of us never see these fish spawn, as they do so in a stealthy manner that increases the likelihood of success. These are the genes that provide bass with the traits they need to survive. The weaker genes produce “food” for the masses. In temperate regions, some nests may have better success after the peak when most of the nest predators (such as bluegill) are full from raids during the peak bass spawn, and now they are too busy building their own nests to raid the later-spawned nests.

In any balanced (read healthy) fishery only a fraction of the fingerlings make it through the first winter. This is nature’s way of providing food for those that did survive. Studies have shown that it only takes one successful nest to repopulate an entire cove. So between a protracted spawning period, and sheer volume of egg production, and even the ability to spawn more than once in a season, bass have the odds stacked in their favor for continuing the species. Another factor that works in the favor of bass is their ability to utilize a wide variety of spawning grounds. Unlike many fish species, bass can utilize everything from sand, gravel, sunken logs, stumps, underwater wrecks, rocks, or any other substrate that offers a firm substrate. Most lakes offer spawning grounds dispersed over huge areas. This makes it difficult for predators, which include us humans, to efficiently impact a bass’ ability to reproduce.

When I was growing up in Delaware, I was surprised by the then common practice of several neighboring states to close all fishing for bass until after the spawning season. It didn’t make sense because most lakes were at their carrying capacity for bass already, so protecting the spawn did not have the desired effect on populations. If anything it had a negative effect because bass were not pressured for part of the year, and then all of a sudden they were easily caught in large numbers because they had lost their ability to be wary of angler’s offerings. Put simply, they became easy to catch. On top of that, there are real costs to a fishery by not allowing anglers to fish for them…but that is the subject for another article. Now some of these states have reconsidered closed seasons, and it will be interesting to see the outcomes.

By now you may be wondering if I advocate the pillage of bass while they are nesting? NO, I do not prefer to fish for spawning bass, nor do I recommend it. Once you figure out how to catch bedding bass, it can be very easy, which lessens the thrill of making the catch. On the other hand, bass are much hardier than most other species, and a healthy bass is usually capable with proper handling to survive a safe release and return to spawning as long as it wasn’t transported any distance.

Of course there are instances in which these bass are not quickly returned, and instead spend the day in livewell until weighed for a tournament, and then released in another area. Once again you could approach this situation with emotion, and conjure up all kinds of reasons to hate tournaments (uh oh, here comes the professor), or you can take a more scientific approach and determine the effect of these tournaments on the overall population of bass. There are always exceptions to every rule, but generally speaking bass populations in the United States are higher today than ever before in history, yet we see more tournaments than ever before, including during peak spawning seasons. For those lakes that are struggling to generate young-of-year bass, targeting spawning bass should be avoided. Actually in those cases, fishing regulations allowing harvest during any season should be carefully considered.

Harvesting a bass in the fall is more harmful than taking it from its bed and releasing it the next spring; in both cases it was prevented from spawning but at least the latter allows the bass to continue to spawn. The bottom line is this: if a fishery is healthy, meaning its population is balanced, then fishing during the spawning season does not pose a high risk. If you have a question about the health of the bass population in your favorite lake, try to determine if the bass population is stable, increasing, or declining. Ask experienced anglers that spend a lot of time on that lake, or better yet, ask your area fisheries biologist. In most cases you will find that there is little to be worried about, other than my old ecology professor getting on your case when you slip up and let emotions guide your decisions! Ciao. (You can reach me at LimitBy9@aol.com).