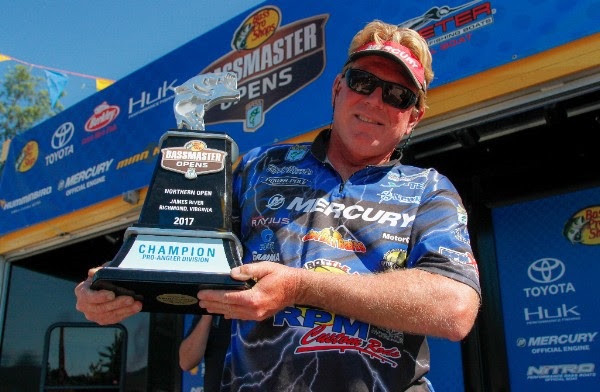 Rick Morris of Lake Gaston, Va., wins the 2017 Bass Pro Shops Bassmaster Northern Open No. 2 held on the James River out of Richmond, Va., with a three-day total weight of 43 pounds, 15 ounces.

The Lake Gaston, Va., angler weighed in a 16-pound, 11-ounce five-bass limit and finished with a three-day total of 43-15 to clinch the pro division title. Morris received the top prize of a $45,000 Skeeter bass boat/Yamaha outboard rig and $6,784 in cash. He also qualified for the 2018 GEICO Bassmaster Classic presented by DICK’S Sporting Goods, contingent upon him fishing the Northern Open finale at Douglas Lake in September.

The former Bassmaster Elite Series competitor ran to the Chickahominy River Saturday morning and noticed a “dead low” tide when he got there.

“So, the bite was pretty fast and furious, and I caught a lot of fish early because the water is clean when it is low,” he said.

Morris’ vast experience on the river helped him put together the patterns that produced all three competition days. He caught his fish on a Texas-rigged 6-inch Riverside ring worm (grape and powder blue) and Ditto worm in black and blue, a 3/4-ounce War Eagle spinnerbait and a 1/2-ounce War Eagle jig tipped with a Strike King Rage Craw. He knew bass on the James River feed on blue crabs, so he decided to use blue worms throughout the tournament to mimic the forage.

The worms produced best for Morris early Saturday morning. “I caught a good one of about 3 1/2 pounds and lost a real giant in a brush pile,” he said. “Then the tide started coming back in and the water was getting dirty, so we went to pitching the War Eagle spinnerbait and caught a few more.”

During midday, Morris moved out to the main river and started fishing dock blinds and barges with the War Eagle Jig and Strike King Rage Craw in various colors. Morris said he caught his fish the first two days running about the same spots and fishing with the same lures.

Henrico, Va., angler Jeff Hamilton finished second in the pro division with 42-14. He decided to stick close to home Saturday and fished around the Osborne Landing area.

“I feel real comfortable fishing there so that is what I did,” he said. “I just kind of grinded it out.”

The 40-year-old car salesman caught most of his fish Saturday on a Zoom Trick Worm. He also caught fish throughout the week on a Rapala DT6 crankbait, a Chatterbait and a Rebel Pop-R.

Jon Jezierski of Troy, Mich., caught only one keeper Saturday, but he still won the co-angler division with 20-5 and earned the grand prize of a $30,000 Triton bass boat/ Mercury outboard rig. The 49-year-old finish carpenter was bolstered by a Day 2 catch that included an 8- 9 largemouth he caught on a shaky head worm while fishing with Bassmaster Elite Series pro Mike Iaconelli. Jezierski’s big fish earned him the $250 Phoenix Boats Big Bass Award on the co-angler side.

The Phoenix Boats Big Bass Award of $750 on the boater side went to Rick Shannon of Woodlawn, Tenn., with an 9-3 bass.

Morris earned the Power-Pole Captain’s Cash Award of $500 for being the highest-placing angler who is registered and eligible and uses a client-approved product on his boat.