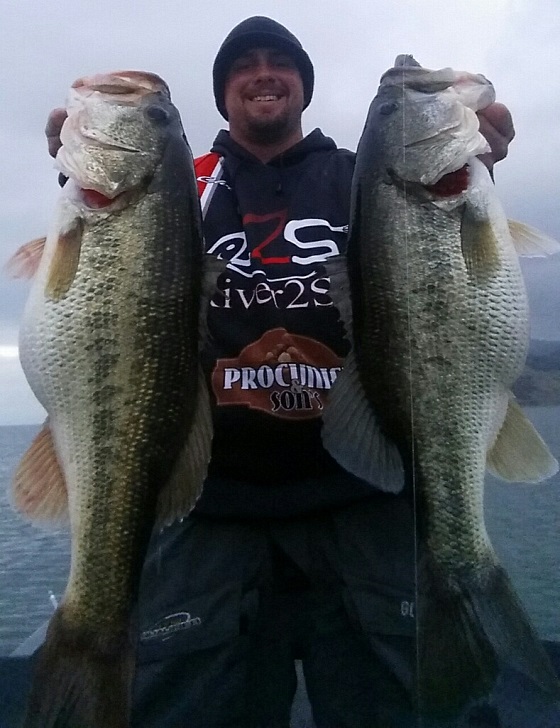 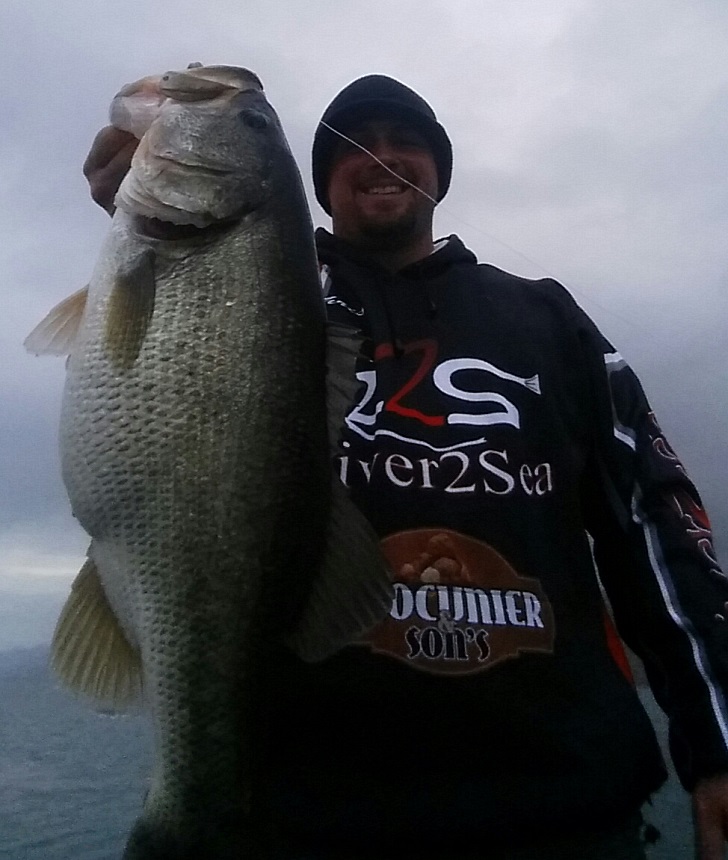 Chris Huff of Yuba City, Calif., launched at Markley Cove on Berryessa this weekend for what would turn out to be the best limit of his life - five for 39 lbs.

"It was in between storms and I decided to head up there early in the morning," said the 28-year old angler. "There was a bit of cloud cover and a nice little chop on the water. It was perfect for glide baits."

Huff started with the River2Sea S-Waver 200 in light trout on 20 lb fluoro, using an 806 Dobyns rod.

"First thing in the morning, it was hot and heavy," he said. "Within the first three hours, I probably had 12 bites and hooked up with six."

The morning action hit a lull, dying off for about three hours.

"Right before it got dark, I found this main lake point that went way out and dropped off into the main channel" he said.

He described the top of the point in 8 ft, with a 30 ft drop on each side and a drop to 50 off of the tip. "I pulled up and witnessed mayhem," recalled Huff. "It was unbelievable. There were 12 to 14 inch trout everywhere, swimming for their lives with a giant wolf pack of 9 or 10 lbr's chasin' 'em. They were jumpin' 3 or 4 ft out of the water. I have never seen anything like it in my life."

Huff put his S-Waver into the mix, slow rolling it back.

"They were hittin' it, but I missed it," he said. "I got hit FOUR times and missed 'em all, on one cast on this particular point."

Realizing an adjustment was necessary, Huff threw out and began to burn his bait back to the boat, mimicking the high speed of the trout being chased in the area. "I reeled it in as fast as I could, stopping and twitching here and there. That was the ticket. The first one I caught was a 10.2. It hit like a ton of bricks and came out of the water two or three times. I was so excited."

Fishing solo, Huff struggled with the net; but finally got the double digit into the boat. The S-Waver also put a 7.3 and two sixes in the box, while culling three or four in the five pound class range.

As the S-Waver bite cooled, Huff threw an 8 inch Huddie ROF 12 in phantom trout on an 807 Dobyns rod to land a 9.6. "I was out off of the very tip of a point and looked back to see where the point met the water," he said. "I saw the bass were there busting on trout. I casted out and by about two cranks in - BAM, that nine hit."

The water temp started at 58 degrees in the morning and got up to 60 in the afternoon. Visibility went to 4 or 5 ft.

"When the water starts cooling down like this and gets into the high 50's, the fish know it's time to eat up," stated Huff. "They are getting into that fall feeding frenzy. and it was just one of those days when the big girls are chomping on trout and I happened to be throwing the right baits on the right stuff to get 'em in. I have had 30 lb days at Clear Lake, but I have never had a day like this. It was by far the best day fishing that I have ever had in my life. It was definitely something special."