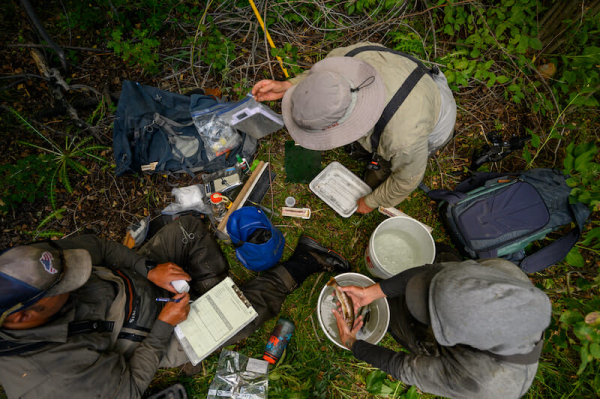 Trout Unlimited is proud to announce our first TU Science Week starting Monday, Oct. 19. Join us for five days of social media postings including daily Instagram Live events (@troutunlimited), stories explaining various ways science is incorporated into the conservation and policy work we do and two science-themed film debuts produced by our own Josh Duplechian.

“Science is a part of everything we do at Trout Unlimited,” said, Chris Wood, president and CEO of TU. “We want to spend some time over the course of the week sharing with the world the many ways science makes us smarter and better advocates for conservation. Science helps us make the best-informed decisions possible not only for our organization, but for all of our conservation partners as well as federal and state agencies.”

Monday, Oct. 19 — Helen Neville, Trout Unlimited’s senior scientist, will be on Instagram Live starting at 2 p.m. ET. Look for a blog from Helen sharing examples of how science is being used for our work across the country on all TU social media platforms.

Tuesday, Oct. 20 — TU is premiering “Lahontan: A Trout Unlimited Science Story” at 6 p.m. ET. Jason Barnes, Trout Unlimited’s Lahontan cutthroat trout biologist/coordinator, will join filmmaker Josh Duplechian at 5 p.m. ET on Instagram Live. They will talk about the film and Jason’s work on these unique cutthroat trout. A blog from Jason will appear earlier in the day on social media and TU’s website.

Wednesday, Oct. 21 — Steve Moyer, vice president of government affairs at Trout Unlimited, will be on Instagram Live at 2 p.m. ET, to talk about the role science plays in the organization’s efforts to engage in policies important to our mission. For example, EPA officials said mapping of ephemeral streams could not be done, but TU’s Kurt Fesenmyer of the TU Science Team proved them wrong and showed how numerous the important “part-time” streams are across our country with GIS mapping technology. A blog with the same theme will hit social media the same day.

Thursday, Oct. 22 – Our second science film premier of the week is called “Anadromous Waters” and features the impressive work of TU staffer Mark Hieronymus as he seeks to find Alaska rivers not previously documented as holding steelhead and salmon. The state estimates only half of the waters holding anadromous species have been identified. Hieronymus will be joined by filmmaker Josh Duplechian on Instagram Live at 6 p.m. ET. The film will launch at 7 p.m. ET. Hieronymus will also write about his work in a blog released that day.

Friday, Oct. 23 — The TU Science team includes staffers with backgrounds outside the realm of traditional research science. Community science efforts take place around the country. Jake Lemon, TU’s eastern angler science coordinator, works with volunteers and partners on various projects, including deployment of Mayfly Sensor Stations, which TU member volunteers set up to provide real-time access to current stream conditions. Jake will be on Instagram Live at 3 p.m. ET. to talk about Mayfly Sensor Stations and other technologies being used for conservation work in the East, including volunteer stream monitoring programs, sampling eDNA to identify undocumented wild trout populations and using drones with infrared sensors to map stream water temperatures .