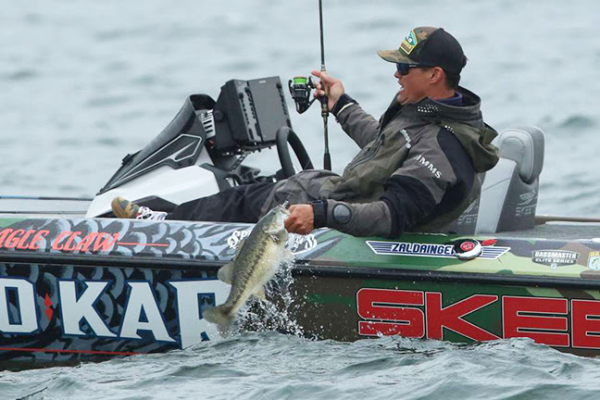 “Given the time of year and the fact that the area is fairly mountainous with sheer bluff walls, rock ledges, and there’s a lot of water that flows through the Tennessee River area, I think the approach technique-wise is going to have to do with water clarity and flow. I’ve been fishing the area for eight years on the Elite Series, and that’s always been a factor. Is there going to be rain water, mud, and stained water rolling down the river? Or, are we going to have lower flows and clear weater? I think that will be the first thing that anglers will have to take into consideration,” says Seaguar pro Chris Zaldain.

Water clarity into account, Zaldain plans to fish a host of different techniques, which he’s quite open about sharing, despite the competitive nature of the event.

“I will be equipped with your traditional first spawn techniques like square bill crankbaits and spinnerbaits. But the thing about the Classic is you’re going for the win, not second place. That said, my specialty happens to be a big fish technique and that’s swimbaits. We all know that spinnerbaits and crankbaits – your shad-imitating moving baits – work really well in March along the Tennessee River. So, I like to throw a little twist on that, so instead of a spinnerbait, I’ll pick up a swimbait. That’s just something I like to do whether it’s a finesse swimbait or what I like to call a tournament-size swimbait, like a six-incher, which gets a lot of bites and catches big fish. I’ll also be equipped with an eight-inch swimbait for those really big bites. You’re not going to catch a limit on it, but if you get one or two bites that could definitely help you win the Classic at the end of the week. Traditional moving baits and swimbaits rigged, then it’s all about location. It’s a large body of water with two different lakes we can fish, so mileage-wise you could run the gas out of your boat if you wanted to. They’re going to give us three whole days of practice, and it’s going to come down to covering water and throwing those confidence lures you think you can win with and just eliminating water. From what I gather a 20-pound bag is a big bag on the Tennessee River. There will be lots of three- and four-pound fish, not the Texas five-, six-, seven-, and eight-pounders. There will be a couple of big ones caught but we’re looking for the three-day long haul – a steady diet of three- to four-pounders.”

In terms of his preferred line, Zaldain is a big fan of fluorocarbon and will rely heavily on Seaguar InvizX even if the water is muddy.

“With those confidence baits that I mentioned, like swimbaits, I’m fishing 15-pound Seaguar InvizX. I go through miles of that stuff a year. And I will have at least six rods spooled with 15-pound Seaguar InvizX—it’s the most versatile line diameter available. I call it my reaction bait line. It’s strong, it can handle the big baits, and it’s so soft and supple. I can throw swimbaits on it; I can throw squarebills on it; and I can throw spinnerbaits on it. I can also throw finesse jigs on it .it’s just a great all-around line. So, I’ll have at six rods and reels rigged up with it and an array of different squarebills, spinnerbaits, jerkbaits, and swimbaits – primarily shad imitators,” says Zaldain.

He continues: “For the big shallow-water stuff, I don’t care if the water is clear or muddy from the rain, my flipping sticks are all rigged with 20 and 25 pound Seaguar Flippin’ Fluorocarbon.

Whenvever I’m flipping hard target shallow I love Seaguar Flippin’ Fluorocarbon. And the reason I’m going to choose fluorocarbon instead of braid is simply because I’m fishing hard targets—shallow-water hard targets, not lots of grass like you’d find in Florida where you need a braid like Seaguar Low-Vis Stealth Gray Smackdown. I’ll be flipping docks, rocks, laydowns on the Tennessee River. There’s a little bit of stretch there and just the circular diameter of that line helps bounce off hard targets a lot better than a braid will. Everything’s just smoother and every hookset I make there’s a little bit of give there. In terms of baits, I’ll probably be fishing a 1/2-ounce Santone Rattlin’ Jig or an old-school tube. I know that in the state of Tennessee vflipping an old school tube works extremely well.”

“We’re probably going to be dealing with off-color water and there’s lots of rain coming down, so the muddy and high-water conditions are going to mean things like moving baits and heavier power fishing tackle. Along those lines, I’ll probably be looking at a lot of 15- and 20-pound Seaguar InvizXand some Seaguar Tatsu on a jig, stuff like that. On most of my power fishing baits I’ll be running 15 to 20 pound InvizX.”

As far as flipping, if it’s muddy as anticipated, Pirch plans to use straight 65-pound Smackdown Low-Vis Smackdown Stealth Gray braid. “But if there’s much clarity at all, I also tie on a 20- or 25-pound Tatsu Flourocarbon leader to the Smackdown.”

Having recently put Seaguar Low-Vis Smackdown Stealth Gray to the test at Elite events in Florida and Georgia, Pirch is extremely pleased with how the line has fished. “It’s the same Smackdown I’ve always liked with the small diameter, supple and long casting qualities, plus the additional camouflage features.”

Like Zaldain, Pirch is excited to compete for the Bassmaster Classic win and is already preparing his gear and mindset for that goal. “I’m real excited to spend the next couple of weeks getting prepared for the Classic and have had a couple of decent events in to start the season, so I’m really looking forward to it.”