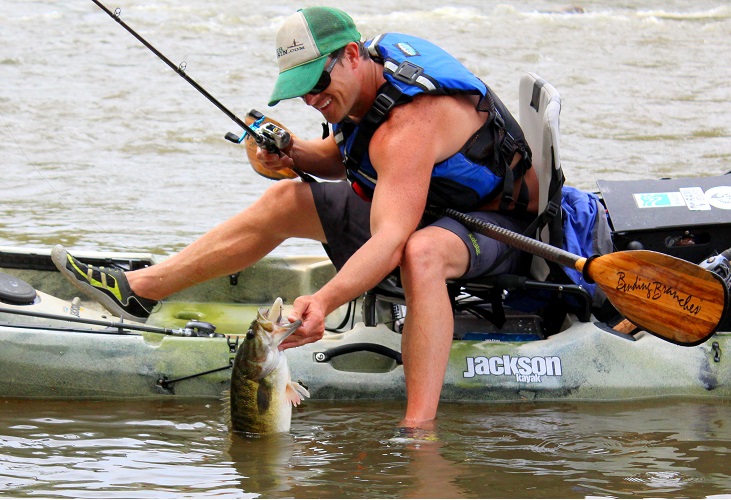 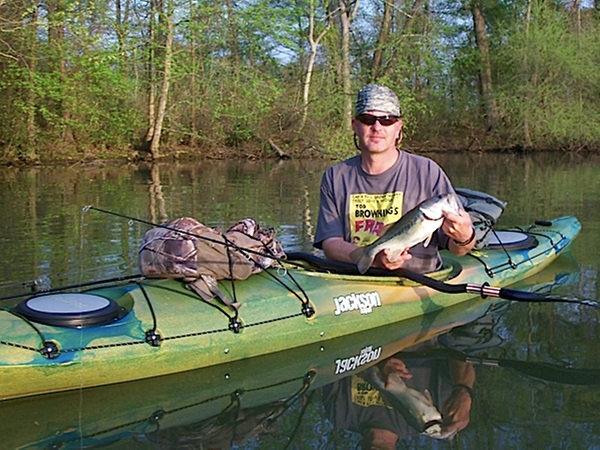 Fishing from kayaks is becoming one of the fastest growing sports in the US. Not only does it get an angler on the water, it provides some exercise as well.

In my last article on bass angling in the plastic armada, I introduced some of the things to consider when thinking about purchasing a kayak. In this article, I will dig deeper into the two major styles of kayaks, the Sit on Top (SOT) and the Sit in Kayak (SIK). Both will get you on the water, but there are some significant differences between the two and hopefully, this will give you a better look before you take the leap.

SOT on top kayaks, or SOTs, are just that – the boater rides on top of the kayak, sitting in an area cut out for the boater’s body. Aside from the position of the SOT rider, the feature that most distinguishes this yak from the SIK is that it is “self-bailing”. This means that if water gets on top of the kayak, it will either run off naturally, due to the yak having no walls to keep it in, or it will drain from the sitting area through small holes in the bottom called scuppers. The water gets pulled through these scuppers with forward or backward movement of the kayak, and the seating area stays relatively dry. When sitting still, however, there will be some water that comes in through the scuppers, but plugs are available to keep that from happening. The plugs are especially nice to have when boating in colder water.

According to Drew Gregory, a professional angler with Deep Creek Ventures, LLC and Jackson Kayak, SOTs are “nearly” unsinkable, making them excellent in rougher water, like in the surf. “SOTs do allow for internal storage since they are hollow inside,” Gregory adds.(Gregory is shown in the top right image as landing a fat smallmouth from his Jackson SOT)

Tim Stewart, founder of the Hardcore Kayak Fishing Team and member of the Great Outdoor Provision Co. Fishing team, also recommends the SOT for rougher water. “It’s not like you can’t go offshore in a SIK, but nobody wants to wear a spray skirt, myself included,” Stewart states. “So, if you plan to go through the breakers or offshore, SOT is the choice.” (Stewart is shown below with a largemouth caught from his SIK)

SOT kayaks are wider, adding stability side-to-side, which also accounts for the rider that sits higher on the yak, raising the center of gravity. The width does add stability for those who want to stand while fishing, which is becoming more prevalent now. Yes, you can stand in a kayak…with practice, of course. The width of the SOT and the fact that by design they have more plastic than SIKs, makes the SOT heavier and harder to carry than the sit in kayaks. It also makes the SOT harder to paddle than the SIK.

Sit in kayaks are by - definition - kayaks that you sit inside. This means that the rider is closer to the water giving a lower center of gravity and more stability when seated. Being lower also means that it is less affected by wind.

Gregory said, “When standing in a SIK, you are standing below the water line which is a positive to some, because they want to be as stable as possible.”

SIKs are narrower than their cousins, making them more maneuverable and easier to paddle.

“SIKs shine in current and long distances because of this,” Stewart says. “They are also easier to carry because they are lighter and you can put the cockpit on your shoulder for support.”

Both Gregory and Stewart agree that the SIK holds more gear than the SOTs due to the access to everything in the hull as well as on the deck. This is an important feature for anglers and duck hunters, who need more room to store their gear. Accessories, like rod holders and depth finders, are easier to mount on a SIK as well. Sitting in the hull also keeps the rider out of the wind, sun and the rain, as well as keeping paddle drips off the rider.

Sit in kayaks are not self bailing. If water gets inside, you have to bail it out. In bad weather this either means wearing a spray skirt, which Stewart lamented. Or it means having something on hand to get the water out, like a towel, sponge or in more severe cases, a small bucket.

Entry and exit are also harder with a SIK than the SOT. Because the SOT is relatively flat and wide, getting in and out is much easier but with practice, getting in the SIK can be handled nicely.

As can be seen, more goes into choosing a kayak than one might think. There are even hybrid kayaks now that combine features from the SOTs and the SIKs but in the end, the best thing to do when trying to decide is to rent each type. Spending a little money up front will ensure that you find just what you are looking for and then you will be part of the plastic armada.