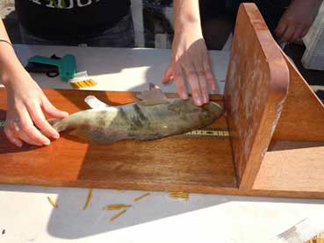 SAN DIEGO – The California Department of Fish and Game is proposing new limits on recreational catches of three saltwater bass species to help populations recover from decades of fishing and 14 years of mostly unfavorable oceanic conditions.

A new two-year collaborative fisheries project, to begin in July, will improve what is known about these stocks, using tagging and recapture data collected by volunteer anglers.

"We are proposing limiting takes so that populations can rebound when oceanic conditions become more favorable," said California Fish and Game marine biologist Erica Jarvis, a co-investigator on the project, which is being funded by Collaborative Fisheries West and the Ocean Protection Council and administered by California Sea Grant. "The study will help the department monitor the effectiveness of any regulatory change and will also help in improving stock assessments for the species."

Brice Semmens, an assistant professor at UCSD’s Scripps Institution of Oceanography, is the project’s lead investigator with Ed Parnell, an associate researcher, also at Scripps.

This month, scientists will begin to charter “party boats” to take volunteers out fishing at select sites between Dana Point in Orange County and Imperial Beach in southern San Diego County. Some of the sampling areas will be inside the new South Coast marine protected areas (MPAs). Anglers will catch, tag and release fish, and record key information such as fish size, the gear used to catch the fish, and whether a fish is suffering from barotrauma (pressure-induced injury). Some fish will be released into pens to document mortality rates from catch-and-release practices.

The San Diego Oceans Foundation, a collaborator on the project, pilot tested a tagging program in February at the San Diego Anglers’ Open Bay Bass Tournament. About 400 bass were tagged and then transferred to a tank, where they were held for a week to document mortalities from being brought up from depth and handled. All the fish survived and were released.

The new research grant will provide continued support for tagging fish at sportfishing tournaments. Anglers next year – it is hoped – will not only tag new fish but also capture ones tagged the year prior.

"These are the fish people catch the most at the tournaments," said John Valencia, executive director of San Diego Oceans Foundation. "It is easy to tag fish when you have them in your hands. We are helping Fish and Game get real science data, and we are doing it collaboratively with sportfishermen."

In addition to collecting data via sport tournaments and chartered party boats, private boat owners will also help scientists catch and tag the one species that is normally not caught in coastal waters, the spotted bay bass, in San Diego Bay and Mission Bay.

In addition to these tag-and-recapture programs, 50 barred sand bass will be caught at a known spawning aggregation in the new South La Jolla Marine Reserve and surgically implanted with acoustic tags. These fish will be tracked via a deployed listening array for up to a year.

Ultimately, the success of this project will hinge on the ability to educate and motivate anglers to report found tags. A major focus of this project is thus to broadly engage the recreational fishing community in the research – how it will work, why it is needed and why it will ultimately benefit the sport fishery by ensuring its long-term sustainability.

To assist in this effort, researchers plan to develop a Smartphone app that fishers can use to report recovered tags and upload photos. A website and publicity via sportfishing associations will also help spread the word on the project and why participation is of value.

Data will be used to better understand fish movement patterns, including "spill over" from MPAs, and to better estimate spawning biomasses and mortality rates from predation, fishing and catch-and-release.

"I really think that if we help get the science and data, we are that much better off," said Dwayne Patenaude, charter master of the San Diego Anglers Fishing Club, which hosts the Open Bay Bass Tournament and is also a collaborator on the project. "We are trying to be proactive. I want the mangers to see that the calico bass fishery is not in trouble. The sand bass fishery is cyclical, and there is no issue with the bay bass."

"I grew up in San Diego, fishing, diving and surfing," said Lyall Bellquist, a graduate student at Scripps Institution of Oceanography, working on the project. "I always thought that the fishermen and researchers should work together and be as transparent as possible, because we are all working ultimately toward the same goal. This grant is the perfect opportunity. I could not have designed a better request for research, in terms of what I've wanted to do."