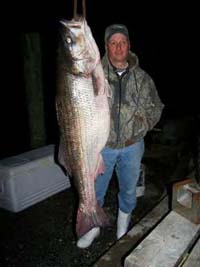 A 63-lb., 8-oz. striped bass caught on January 2nd by Paul W. Kleckner of Greenbackville has been certified as a new Virginia state record by the Virginia Saltwater Fishing Tournament.

Kleckner caught his fish in the Atlantic Ocean off the Eastern Shore of Virginia, approximately 18 miles south of Wachapreague Inlet. He was fishing with Otis W. Evans, Jr. on the private boat White Bite. The record-setting striper, which measured 50.5 inches in length and had a girth of 33 inches, was fooled by a parachute lure dressed with a 4-inch white shad fished as the trailing bait of an umbrella rig.

They were trolling approximately 2 miles off the beach in area with a lot of bait and gannets sitting on the water when the record-setting striped bass struck. Kleckner fought the fish for almost 25 minutes before he was able to land it.

The prior state record of 63-pounds was caught in the Atlantic Ocean near Corolla Lighthouse by Carolyn Brown on January 30, 2004.