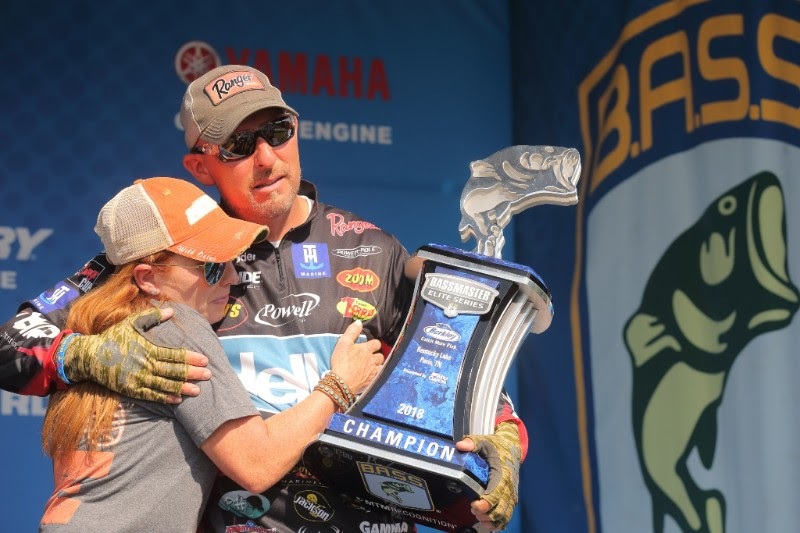 Wesley Strader of Spring City, Tenn., won the 2018 Berkley Bassmaster Elite at Kentucky Lake presented by Abu Garcia out of Paris, Tenn., with a four-day total weight of 80 pounds, 4 ounces.

PARIS, Tenn. — The final day of the Berkley Bassmaster Elite at Kentucky Lake presented by Abu Garcia threw Wesley Strader the right pitch, and he knocked it out of the park.

Strader, a first-year Elite Series pro from Spring City, Tenn., caught a final-day limit of five bass that weighed 20 pounds, 11 ounces and earned his first Elite Series victory with a four-day total of 80-4

“Yesterday, I figured out that the fish were positioning under the walkways on the docks,” he said. “Today, that went away; they got out under the floats. It seemed like, as the sun got higher, the shade got tighter to the docks and you could pretty much pinpoint where they’d bite.

“I didn’t think the shad spawn was that big of a deal for me today. But I pulled up on a stretch of docks that I had not fished early in the morning and just about every cast, when I’d reel my bait out from underneath the floats, there would be two or three threadfin shad following my spinnerbait.”

Unlike the previous days, Strader was unable to leverage the early-morning shad spawn. But he put several keepers in the boat by alternating between a 5/8-ounce Stan Sloan Bango Blade spinnerbait with a white swimbait trailer, a buzzbait, a popping frog and a white Zoom Z-Craw that he swam through shallow bushes.

He still found some early productivity. But it was a magical, one-hour midday flurry that vaulted Strader into the unofficial BASSTrakk lead.

Flipping shallow bushes in a small pocket off Big Sandy Creek, Strader added three solid keepers — all 4-plus pounds — to his livewell. That left him releasing fish he normally would would not cull.

“That’s a good problem to have — catching 3-pounders and they can’t help you,” said Strader, as he chuckled during a BASS Live segment.

Strader caught his flipping fish on a Texas-rigged Reaction Innovations Sweet Beaver with a 5/16-ounce Reins Tungsten sinker and a 5/0 Trokar hook fished on 20-pound Gamma Edge fluorocarbon. The Tramp Stamp color, he said, has proven productive in all his previous Kentucky Lake events. Trusting that pattern Monday proved to be a winning decision.

“For some reason, in this tea-colored water, they like that color,” he said.

“I think I was just on a hot pocket where they were either coming out or guarding fry; I don’t think they were spawning,” he said. “They were just in those bushes chilling, and it was all on the initial fall of the bait.”

Auburn, Calif., superstar Skeet Reese missed his limit by one fish. But his four bass weighed 17-10 and he still finished second with 76-6. Reese spent much of his final day throwing a 7-inch line-through swimbait, but some of his key bites during the tournament came on a a Lucky Craft Magnum SKT squarebill.

Kelly Jaye of Dadeville, Ala., added a solid limit of 18-7 on the final day and improved two spots to third place with 73-6. Jaye caught all of his fish on a Megabass Vision 110 jerkbait in the matte shad color.

Bradley Roy was awarded $1,000 for the leading the Toyota Bassmaster Angler of the Year points race at the end of the event.

​Strader also earned the Power-Pole Captain’s Cash Award of $1,000 for being the highest-placing angler who is registered and eligible and uses a client-approved product on his boat.
​
Shaw Grigsby Jr.​ was awarded $1,500 dollars as the winner of the Phoenix Boats Big Bass award. He had the largest bass of the tournament with a 7​-11 on Day 2.
​
Christie was awarded the Toyota Bonus Bucks Award of $3,000 for being the highest-placing eligible entrant in the program. The second-highest-placing eligible entrant, Josh Bertrand​, received $2,000.