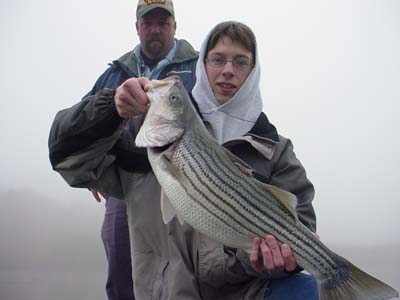 For many years, striper fishing with lures has been a favorite of many anglers, but what is the right lure for the job? The key, select your lures to do a specific job. Keeping and becoming familiar with an assortment of baits will help you gain success. Topwater, shallow baits, medium depth baits, deep baits, swimbaits and bottom bouncers will all become part of your arsenal. Sure, you will have a few favorites which best suit your comfort level, but familiarity with the entire spectrum of options will also help. Let's break it down a bit for you In the topwater group, baits such as the striper or bass size Chub Creek Knuckleheads, Pencil poppers, or Zara Spooks in chrome/blue or black, red/white, black or rainbow trout patterns will do the trick.

Shallow baits like your basic Rebel minnow, Bomber Long A's or Rapalas in chrome/blue or trout patterns are good choices.

My Favorite and most versatile baits fall into the Medium depth category, are by far Rattletraps in 1/4, 1/2, and 3/4 ounce sizes. While the original designed Rat-L-Trap is tough to beat in the basic colors, the bleeding shad series is rapidly becoming a go-to bait for me. Injured fish make erratic motions, vibrations and sounds. All of these stimuli prompt aggressive behavior in predators. Mix in a few drops of blood and fish cannot resist. When bass spot a bleeding shad, they rush in for the kill. Sure, nobody can completely duplicate nature, but the Bleeding Shad Rat-L-Trap comes very close, a Bleeding Shad Rat-L-Trap closely mimics injured baitfish in both sight and sound. Their Liv-N-Sound technology combines with bleeding gill effects and fish-attracting Reflex Red hooks make this lure a "natural" for all game fish.

Trollers are most familiar with deep diving baits such as the deep diving Rebel minnow or Rapalas, On the Delta the bright Orange, Pinks and chartreuse patterns do well.

Bottom bouncing baits such as bucktails (Hair Raisers) or Road Runners, Sassy shads in a variety of sizes are hard to beat. The Road Runners and the Sassy shad type baits are far more productive than the bucktails in most situations because of their added vibrations.

Ok, so where do you try these types of baits? Any rocky type structure can serve as a holding place for stripers. Look for riprap banks, rocky jetties, rocky points or ballast rock piles throughout the river. Another good location is sand bars or long points where the current creates a distinct 'rip' or break across them.

Some points will be good on the incoming tide and some better on the outgoing, it is up to you to learn which is better on each tide. Bridge pilings, bulkheads and old wharf pilings are excellent places to find stripers and if you locate grass beds, such as those so abundant in the flooded islands like Frank's tract, Sherman and others, you'll find linesides.

One area often over looked by most river anglers is the flats. Generally, a flat with three to six feet of water and a good gravel or hard sand bottom is where to start your search. When you find the stripers on these flats, the bite is awesome. The fish can be so thick that it is easy to confuse what you see as carp. The stripers can sometimes be seen cruising in large schools.

During the summer and fall and into early winter, good numbers of stripers can be found at different depths along ledges close to flats. These flats may cover large areas but the stripers can be located with your boats electronics.

Stripers are a low light feeder and the best topwater bite will be early morning or late evening or even at night. As the sun gets higher in the sky, switch to progressively deeper running baits. Rarely, in our river systems is it necessary, under most stable weather conditions, to fish deeper than 15 feet.

When the bite is on you can catch 20 stripers a day, with most being in the 5-8 pound class, and there is hardly a greater thrill than to have a 20-pound plus striper smash Zara Spook. Striper fishing can become addictive and require a change in your life. These powerful fish have a way of doing that to a person.