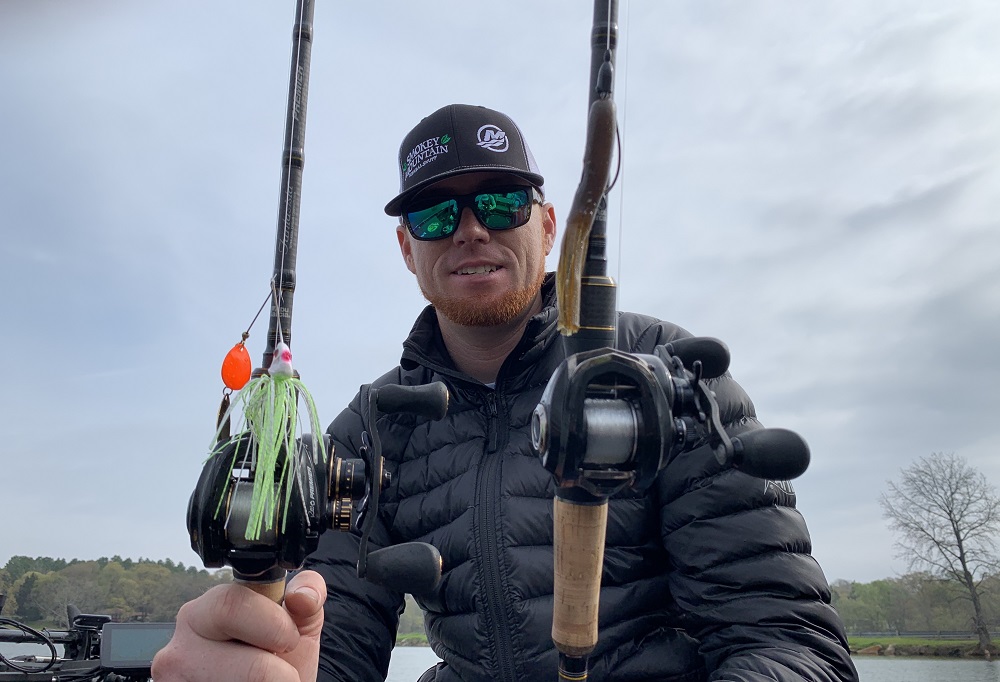 Early in the year, no matter where you live, bass are on their way to shallow water to spawn. Another given is that the water will likely be as stained and dirtiest that it all year. Because of this, Major League Fishing pro Josh Bertrand will focus on two proven techniques: flipping and pitching and a spinnerbait.

“Most of the time, during the spring, you are going to have some rain or snowmelt to make the water dirty. Flipping and pitching and throwing a spinnerbait are two great techniques for stained and dirty water and with bass being shallow in the spring, they are always two of my go-to techniques this time of year,” Bertrand said. 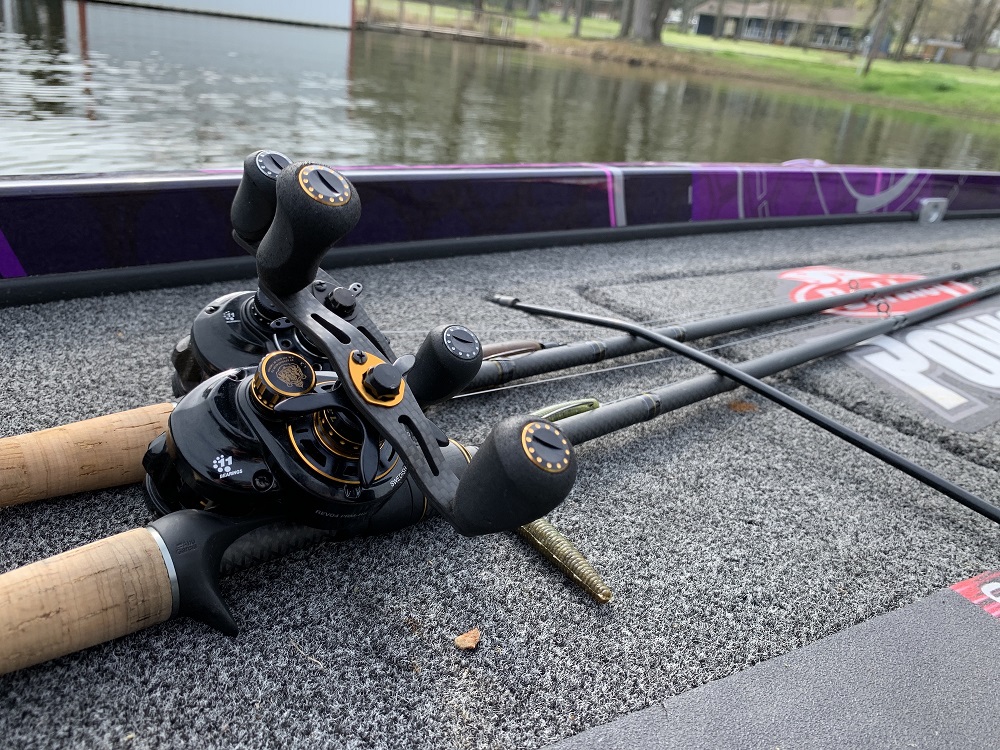 A Switch to a Shorter Spinnerbait Rod

Over the past few years, the trend with fishing rods is that they continue to get longer and longer, but Bertrand says a shorter rod is still needed this time of year.

A sub-seven footer is something he has gone back to after seeing just how useful they can be.

“Not that long ago, I didn’t have a rod in my boat less than seven-foot-long, but I’ve learned to go back to a shorter rod for spinnerbaits this time of year,” he said. “It makes it much easier to make shallow roll casts to laydowns, docks, rocks, and boulders.”

His rod of choice is a 6’10” medium-heavy Abu Garcia Fantasista Premier that he pairs with a 6.6:1 Abu Garcia Revo Premier reel.

“I love a rod that is a little shorter and with a smaller butt section for making those accurate casts. This isn’t Lake Mead spinnerbait fishing where you bomb it out and burn it back it; I like to make tight casts to cover and docks in shallow water early in the year,” Bertrand said. “It’s also really sensitive, and you can feel that vibration from a spinnerbait and know when it is running right.”

His reel of choice is also a little slower, just because of the time of year.

“In the summertime, I am fishing spinnerbaits more in open water and burning them and like a 7.3:1, but early in the year I like the slower 6.6:1 gear ratio to help me slow it down,” Bertrand added and said that he opts for 15 or 17-pound Berkley Trilene 100% Fluorocarbon. “Sometimes, I’ll go up to 20-pound, but 15 and 17 are plenty strong and make it a little easier for casting a spinnerbait.” 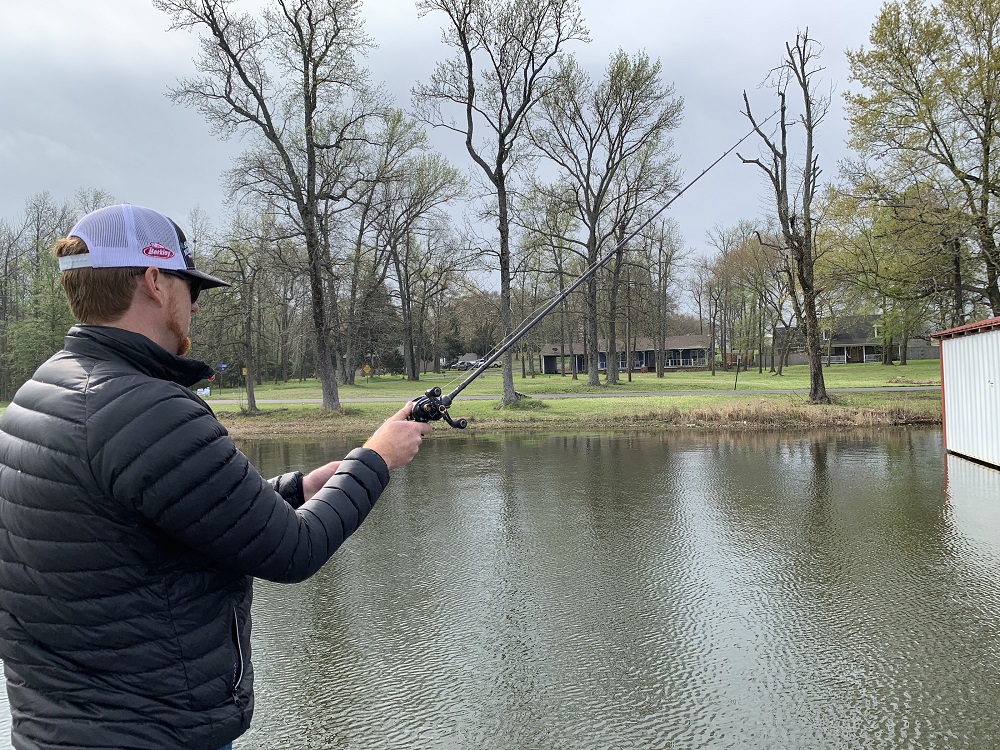 Bertrand also leans on flipping and pitching heavily this time of year and will often go with a tried-and-true tube bait because of how well it works and how easily it comes through the cover.

He’s also a fan of using fluorocarbon over braid, for several reasons.

“I’m a big fluorocarbon guy for flipping and pitching, and really the only time I use braid is when I am around really thick grass. I pick fluorocarbon for a few reasons; one is it is so much quieter. You don’t hear it zinging off of dock pilings, wood, and logs,” Bertrand shared.

He also thinks it helps him land more fish.

“It keeps the fish in the water; braid tends to pull a fish out of the water or to the surface more on a hard hookset just because it doesn’t have any stretch. It’s just like a fish jumping on the fight and that’s one more chance to lose that fish,” he believes.

Depending on the cover he is fishing, he will use either a 7’6” heavy Abu Garcia Fantasista Premier rod or the shorter 7’3” version.

“I’ll use the 7’3” for isolated targets, but the 7’6” really helps with flipping and lets you get it out further if you need to,” he said.

For reels, he alternates between a 7.3:1 Abu Garcia Revo Premier and an 8.1:1 Revo MGX. He decides which one to use based on the bait he is flipping and pitching.

“The bigger knobs on the Premier are really nice for getting a good handle on the reel, but that MGX is amazing for lighter baits. I use a lot of ¼ ounce weights on my tubes and that MGX does a great job,” Bertrand said.

Anytime you are faced with stained and muddy water in the spring, a spinnerbait and flipping and pitching are hard to beat. Often they are the only rods that Josh Bertrand has rigged and ready on the deck of his boat. Sometimes, that is all you need for springtime success.