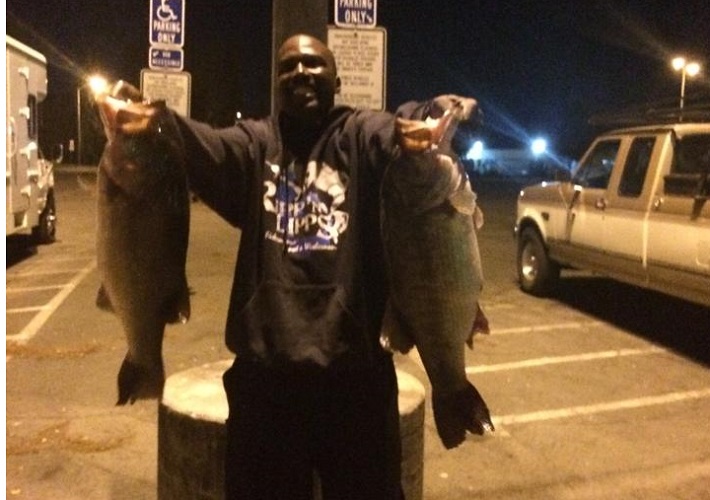 Delta fishing partners, Obedie Williams and Clint Groenwold took the top-spot in the Tracy Bass event at the California Delta this past Saturday, leading by nearly 10 lbs. The team bested the field finding a five-fish limit of 28.06 with a kicker at 8.82.

Williams and Groenwold focused on  a single primary area. "We had been fishing there, the week before, in the River2Sea tournament and knew there was good fish still there," said Williams.

Williams and Groenwold employed a variety of baits, but found punchin', flippin' and dropshotting' got their weigh fish.  "We used an 1 1/2 oz weight for punchin' and a 1/2 oz for flippin'," said Williams. "We used craw colors, mostly, Missile Baits D Bombs with a skirt, but we got one on a Beaver."

Groenwold picked up a five, making long casts to the edge of a grass line, further off the bank. "Clint saw some good one cruising around and tried the dropshot," said Williams. At first he got a bunch of little fish and then he started the getting better ones," said Williams." He was using a worm in Margarita Mutilator. If you throw one of those around, something' is bound to happen and it did."

The anglers landed 15 keepers for the day. Their most productive depth was 6 to 8 ft. The last hour of the outgo and the first hour of the incoming produced their best bite. "We needed water movement to get the fish feeding," explained Williams."There is so much hyacinth on the Delta right now, it is about putting time on the water to find where the good spots are. You really have to pick the areas apart."

Their big fish bit a D Bomb about 10 a.m. "The tide was bottoming out, I made a flip and felt a good bite," recalled Williams. "I set the hook and she started diggin' and diggin'. Then she jumped out and was layin' on top. Clint had hit the trolling motor, so we could go in and get her. Once we got her in, the momentum was high. The fish got really active after that and we were lucky enough to catch the right ones."

The fishing partners are coming off last month's 4th place finish in the 140 boat field of the Best Bass Tournaments (BBT) Tournament of Champions (TOC), also held on the tidal water fishery. Several months prior, Williams single-handedly hauled in two for twenty among a 30.7 limit in an evening event on the East Delta this past summer (pictured below).

They filmed their catch and release as Williams discussed the ups and downs of the R2S event. Watch it below.