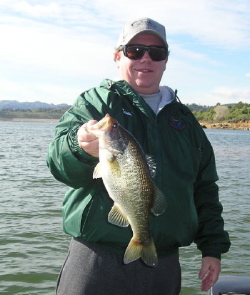 It was the summer of 2004, and I, along with my tournament partner (and cousin), Daren Lacher, were licking our wounds after a season of pastings at the hands of some of the best fisherman in Southern California. We had been fishing Central Coast lakes such as Cachuma and Casitas and had really been getting our hats handed to us. We knew we could fish better, and had to work hard on evaluating our situation.

One of the common denominators, at least for me, was that I have had much of my tournament success at Castaic Lake, the famed reservoir 45 miles north of Los Angeles. Daren had caught plenty of fish there as well, so it was decided that the first thing we should do was fish Castaic and pretty much nothing else for the foreseeable future. It was at that time that I got a timely offer-be part of a team tournament staff that fished nothing but Castaic.

Needless to say, I jumped at the offer. I quickly emailed my partner with the news and then called him as well. He said he had just read the email and thought it was a good idea. The offer had come from good friend Michael Stern, who was to be the new director of the U.S. Angler’s Choice Castaic region team tournament circuit. We would be helping out at seven tournaments during the next season, and as it turned out, another seven the following season as we were on the staff for a second season in a row.

So, what is it like to be a tournament staff member? First off, a great thing is that you usually get a discount on your entry fee, often only having to pay for options you wish to enter. This tends to make it a lot less painful when you have a bad day as you are not donating as much! In exchange, you have to show up well before the tournament starts, bringing a whole new meaning to the term “0'dark thirty.” For a 6am blastoff, you may need to be at the ramp at 3am! Remember, there are many things to get accomplished before anyone launches, including the setting up of sign up tables, the hanging of sponsor banners, and the collecting of fees and making sure everyone is signed up properly and registered for the event. You must have all your ducks in a row before the tournament starts.

If the tournament ends around 2:30pm, you also have to consider that the weigh in may not be finished until 3:30. Then, after the awards ceremony you’ll help break down equipment and put everything away until the next event. These things can help stretch out a simple eight hour tournament day into an exhausting 13 or 14 hour event.

Oh, I also forgot to mention the drive home! I am fortunate to only live about 20 minutes from Castaic, but my partner lives 85 miles from the ramp, making it necessary for him to sometimes be on the road prior to 2AM! Ouch! In addition, you can wipe out about 20 minutes of your fishing day as you’ll need to be in early in order to help conduct boat check-in and the weigh in.

Now, am I sounding negative? There are many positive aspects to this whole deal. Like I mentioned earlier, it’s much easier to afford tournaments when you are getting a discount. You also get to meet some great people, folks you usually would only see walking across the parking lot. You can learn a lot from always being at the awards ceremony. We have some of the best fisherman right here in Southern California, and it’s very interesting to listen to how people caught their fish. You can also learn how tournaments are run, as you can get an inside look at the tournament director’s job.

So how were the last two seasons for us? The first season was kind of a readjusting period, and this season was a bit of a breakthrough as we cashed several checks and finished third in the year end standings. The past two years have been very enjoyable, both from a fishing standpoint and from a staff members perspective. I can look at my tournament plaques on my wall and feel proud of our success. I have to give a huge thanks to Mr. Stern for giving us this opportunity. If you ever have a chance to be on a staff, give it a shot. You won’t regret your decision.