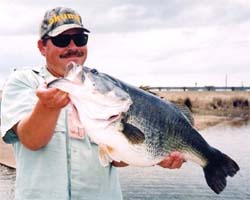 Everyone has heard about "Catch and Release" for many years. In fact, it has become almost a knee-jerk reaction for many anglers, to the point where it has actually caused problems with overpopulations of smaller fish, and the loss of quality, in some fisheries. No doubt about it, C/ R is the 1a class. "Selective harvest" on the other hand, while it requires a bit more thought, is the advanced course, and can provide increased benefits for most fisheries.

So what's the problem?

Many people practice a reversed type of selective harvest. That is, they will release every fish that they catch for years and years. Then one day, when they finally catch the fish of a life time, they decide to keep this one and hang it on the wall. The fact of the matter is, it would have been much less detrimental to the fishery had they kept a few smaller fish every now and then, and then released the giant !

Often you will hear the argument about a huge fish having already contributed its "trophy genes" to the pool, and that it is now past it’s spawning prime.

Well first of all, it has been proven that most bass will continue to spawn throughout there entire life, and while they will produce fewer offspring towards the end of there life span, fewer is much better than "none" at all. Also, a fish which has already proven to have the right genes to get huge, is the exact fish that should be allowed to produce every last baby possible !

Secondly, if a huge fish is released, there is a strong chance that that fish will be caught again, and of course there is also a strong chance that that fish will become some other lucky anglers "best catch of a lifetime" ! Of course, you yourself, might just be the lucky angler who re-catches that fish when it is even bigger. This is not near as uncommon as people tend to think. I have personally caught, released, and then re-caught several fish from 7 lbs to 13.5 lbs. There is no doubt in my mind that as I continue to release my trophy catches, the odds continue to increase, that I will eventually re-catch a fish which, in the time since it’s first release, has grown to be HUGE !

Thirdly, you will often hear people say about a huge fish: "Well, it’s a really old fish and it’s probably at the end of it’s life span anyway"...... Hmmm.... maybe, or maybe not. Obviously an 18 lb bass had to be 15 lbs at one point. A 20 lb’er had to be 18 lbs, and a World record will have to 20 lbs, first. It would be easy to say that this 15, 18, or 20 lb fish was already at the end of its life span, but there is never a way to be sure of that. The plain and simple fact is, a huge fish which is released will have "some chance", no matter how slim, of becoming even bigger..... maybe even a world record ! While a huge fish which has been hung above the fireplace will have absolutely "no chance" !

The bottom line is this: We should always think twice about eliminating the chance for a fellow angler to catch that fish of a lifetime, or even for ourselves, the second time around !

Education is the key

Many years ago I kept a sub-ten bass and had it mounted. Later I regretted that decision, and really wished I would have had a replica made. But live and learn. Why do I mention this here ? I believe this is a great way to put myself on the same level as many anglers "who have not been there..... yet". The approach of slamming another angler with, "I won't do that, and you shouldn't either" never works, and quite simply drives a wedge between yourself and the anglers you are trying to educate. If they have killed a fish in the past, so be it. You cant change that. But through tactful communication, you might possibly prevent this angler from killing more giants in the future.

I truly believe that the vast majority of the anglers who might otherwise keep a huge fish for the wall, would in fact release that fish, if they only knew the importance of that fish to the fishery. Also of course, if they knew how nice the modern replicas were, and how easy it was to have one made.

As for those few anglers who will just never understand, we should always remember this: As an American, and possessing a state fishing license, it is every anglers RIGHT to catch and keep any fish that he wants to, within the regulations set forth by our Fish and Game agencies. We certainly don't want anyone interfering with our rights, therefore we certainly should not interfere with anyone else's.

Again, the best we can do is to educate anglers with all of the facts, and hope that they will make the right decision. Most will.

Taking care of your trophy catch

A strong consideration for anyone who intends to release a huge fish should they catch it, is how to take care of it between the time of the actual catch, photos, weighing, and release. I'm quite sure that many trophy catches, despite the anglers best intentions of releasing the fish alive, will in fact perish, simply because the angler was not prepared to handle the situation.

For starters, no fish should be kept out of the water for any more than a couple minutes at a time...... even less in warm weather.

ALWAYS carry a decent camera. Its also nice to have a disposable 35mm camera stored away in your tackle bag too, just for cheap insurance. ALWAYS carry a reliable scale. There are a ton of reasonably priced models on the market to choose from. I use a Berkeley 50 lb digital. You should also carry a decent spring scale as well, just in case your digital should happen to malfunction.

"AFTER you catch that fish of a lifetime" is NOT the time to run around looking for a camera or a scale. Quite simply, you need to be prepared at all times.

If you happen to be in a boat with a circulated livewell, this will be fine until you can get your camera and scale ready. If you fish from a small boat like I do, a large icebox which is partially filled with lake water, will suffice as a temporary live well. If you are fishing from the shore, the fish can be placed on a stringer, with a rope or clip put through the lip (not the gills) of the fish, while preparations are made for photos and weighing. Finally, if this is a really big fish (a lake record, a contest winner, etc) and needs to be weighed on a certified scale, then a large, partially filled ice box, or tournament weigh bag should be used to transport the fish to and from the certified scale.

Please allow me to reiterate that a fish should never be out of the water for more than two minutes, or even less in warmer weather.

Huge Largemouths are occasionally caught "accidentally" by trout anglers. These anglers who are accustomed to the "put and take" hatchery trout fishery, are often not aware that a trophy bass fishery is a whole different story. Please don’t slam these anglers..... but rather, do your best to educate them in a friendly, tactful manner.

A giant Largemouth bass of 10, 13, 17 lbs, or even more, is quite literally a "one in millions" fish. This fish has beaten absolutely incredible odds to attain this size.

For your own chances of re-catching a huge fish when she has grown to be even bigger, as well as that same chance for your fellow anglers, please release all of the giants.

Catch and Release a Trophy Bass!