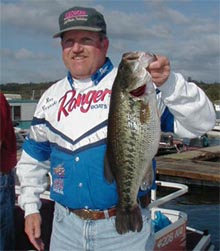 Having put on team tournaments for more than a decade, I have seen a lot of interesting happenings. I have seen teams that didn’t make it half way through their very first tournament day together, I have seen team members fist fighting in the parking lot, I have seen one team member throw his partner into the lake, and I have even seen a team member propose to his partner during a tournament (don’t worry, it was a man/woman team). But one thing that never ceases to amaze is that, with the beginning of every new season, anglers who fished the previous season with one partner, will show up for the first tournament of the new season with a new (or different) partner, even teams that did well during the previous season. I learned long ago never to ask why. I did so once, only to be told a horrible story about how the guy’s wife ran off with his former partner. I must admit, the guy had a pretty good sense of humor about it all. “I’m sure gonna miss him, he was a damn good stick,” he told me.

I am equally amazed at how some teams stay together year after year, some for as many as 25 years or more. One thing that I have noticed about these veteran teams is that they always seem to finish at or near the top, year in and year out. What keeps these teams together? Why are they so successful? What is their secret? Here is what I have learned from some of my veteran teams over the years.

Good Chemistry and a Good Attitude

While many people believe that it is simply “good chemistry” that keeps a team together for a long time, (much like psychologists say of a successful marriage), I believe that it is more a matter of having the right attitude. Now I’m certainly not saying that good chemistry isn’t a huge factor, it most certainly is. However, team members with a good attitude just seem to consistently do well and remain together for a long time. Most of these successful teams are well beyond the boater/non-boater (or captain/first mate) attitude, or the “I’ve been doing this longer than you have” frame of mind. They consider themselves as equals and even though one member of the veteran team may appear to be the captain, this is usually more a matter of who is driving the boat than who is actually calling the shots.

There is absolutely no substitute for time on the water. I cannot begin to tell you how many times I have heard a member of one of my successful veteran teams say to an awards ceremony audience “I couldn’t get out to pre-fish, but my partner did and found some fish”. Pre-fishing helps in a variety of ways. The most obvious (and most enjoyable) is when you really find some good fish and several techniques to catch them. But even if you have a bad pre-fish, it can be useful to you. It helps you eliminate unproductive water; it forces you to make adjustments; and it makes you “just go fishing”. (How many times have you heard that at an awards ceremony by the winners?).

If both team members have a boat, I would recommend that each team member should pre-fish separately and should fish different areas of the lake (or river), and utilize different techniques. Doing so will not only help the team locate more areas to fish, but it will also help them develop more ways to catch them. Keep in mind that even though conditions may change from day to day (or even from hour to hour), the fish will usually remain in the same general area. Chances are that if you or your partner found fish in a specific area and the bite has shut off, you might still be able to catch these fish utilizing the other’s techniques.

As in any sport, tournament anglers have good days and bad days. It is not uncommon for one team member to be “on” and the other “off” on any given day, and then the roles reversed in the very next tournament. This is just the nature of the beast and usually leads to a “middle of the pack” finish. It is when both team members are on (or “in the zone”, as we like to call it) that they prevail, and the veteran teams seem to prevail more often than the rest of the field. Is it just luck? Many believe that it is, and I cannot even begin to count the number of times that I heard this back in the late 80’s and early 90’s when the mother/son team of Carol and Aaron Martens won just about every team tournament that they entered. “They were just lucky,” I would hear in the parking lot after the awards ceremony. Every time I heard this, I would smile, shake my head, and recall the famous quote from the great Thomas Jefferson. “I'm a great believer in luck, and I find the harder I work, the more I have of it,” said the author of our Declaration of Independence and third president of the United States. I assure you that, during their decade of domination, no one worked harder than did Carol and Aaron Martens. Other Southern California veteran teams that fall within this realm of greatness include Jay Poore and John Ed Wilder, Dennis Taylor and Bob Roady, Jim Olivarez and Frank King, and more recently, Greg Stump and Matt Clancy. And I would certainly be remiss if I were to exclude several other very successful veteran teams including Danny Branscum and Troy Duncan (who just won their fourth consecutive Anglers of the Year title in the WON BASS Nevada Region), John Turner and Jim Waits from the Lower Colorado River area, Joe Seale and Jim Williams from the San Diego area, and of course Gary Howell and Ken Mah from the Delta area, among others. I guarantee you that all of these great teams have worked very hard to be “lucky”.

Being a Humble Champion

Have you ever noticed that when a veteran team wins a tournament, they just seem to know exactly what to say at the awards ceremony and know exactly how and when to say it? They acknowledge the quality of the competition, they acknowledge the tournament staff (yes, we really do like to hear it), and they acknowledge their sponsors. Is this just a coincidence? Not on your life. These guys know the value of quality mike time and they know exactly what they are going to say long before they say it. They know how to humble champions. If they were to exhibit a cocky attitude, they would alienate themselves from the other anglers. Keep in mind that all eyes are upon the winners when they begin speaking. If they act like fools, everybody will know it (including their sponsors). If they start drinking or get drunk before they speak, it gets even worse. Unfortunately we have all seen this happen before and it is downright embarrassing for all of us, especially if there are non-fishing spectators in the audience.

Have you noticed that veteran champions always look good at the awards ceremony? They always have a clean sponsor shirt on that they brought solely for this purpose. They are not wearing the same shirts that they fished in all day. Veteran teams enter every tournament expecting to win (don’t you?), and when they do, they are prepared for it. Even if you do not have any sponsors yet, looking good at the awards ceremony is very important. Remember, most tournament organizations photograph the top finishers for publication in their respective magazines or newspapers. If you show up to the awards ceremony looking like a slob, that is exactly how you will be perceived and remembered, which is not a good thing if you are seeking sponsors.

There are certainly many other reasons why veteran teams have stayed together for many years and have enjoyed tremendous success along the way; including some that I do not know about. But hopefully these few pointers will help to start you down that long road to becoming one of these elite veteran teams. Remember, it’s all about teamwork.